Planting of banana on my home garden

In 2010 september, one old person brought some banana suckers for selling. He was very old and weak and he was carrying the suckers on a sack and was coming from a long distance (Kozhinjampara in Palakkad,Kerala). Myself and my wife thought we can experiment with 2 banana suckers and bought it for 20/-. It was a very thin one and he had cut it and shaped it, but he assured that it will grow nicely.

The rented house where I stay now, has some backyard space and since all the kitchen and other wastes gets accumulated here, the soil is black and fertile. Also there are lot of earth worms/castings so aeration in the soil looks very good which is an important factor for good plant growth. As Bhaskar Save points out, the aeration is the most important factor, since you can not even live after holding the breath for long time.  No strong grasses (like crab grass grows there), but some grasses which can be easily cut or uprooted grows there. I made two pits so that the sucker almost completely goes in and mulched with grass and watered it. The land was already wet after the rains.Both the plants came up well and in hot summer we again mulched around it and poured some water.

In summer we watered it some times and since there was mulch around, moisture was there. In summer we were not there for close to a month still they survived. Once the rain started they started growing vigorously and finally it flowered. There were squirrels running around and taking honey from there. When mother-in-law visited us, she gave a support using a plastic rope so that it can withstand winds. We thought to cut it only after squirrels taste the first riped one, but today morning it had bent down..so finally cut it. It was having 59 banana's and totally weighing around 8Kgs..it really looked big for us, especially since we didn't put much effort for it. But the credit goes to the good soil which were built up probably over the years from the kitchen waste and all other organic wastes which get accumulated. 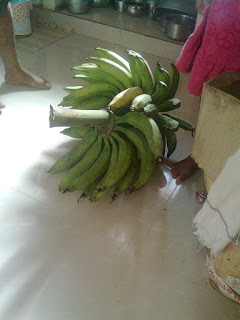 Posted by Nandakumar at 9:12 PM