I use a 'Vettukathi' (in malayalam, probably chopper in English) for cutting the bush and coconut leaves . To start with handle was a big problem, after some use, it will come out and later I learnt that if the iron part comes out from the other end of the handle and fixed, then the handle won't come out that easily. I searched for such a tool and found it and then I was able to use it without any issues so far.

During a visit to a home exhibition, I bought a file for sharpening tools. I just tried that and felt, the chopper has become sharp. Now I keep the tool with me so that I can sharpen it once in a while, instead of taking the tool to blacksmith and it is working beautifully. My helper also acknowledged this factor after using the chopper for cutting a tender coconut. 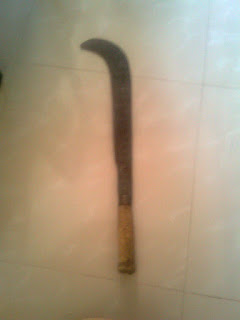 Posted by Nandakumar at 1:06 AM