Cows in the farm

It has been 4 years since I started my natural farming now and so far I haven't made any compost or applied any cow dung in the farm.Once I made 200 litres of Jeewamrithm and applied to banana and coconut. But it was just once, can not say it was effective or not.

Every time I fail in natural farming I go back to 'One straw revolution' or 'Natural Farming' book since there is a model in which Fukuoka san demonstrated success with natural farming and some times I watch the videos. We can see that Fukuoka san applied around 650-900 pounds of chicken manure before the rice cultivation starting and some time he adds another 200 pounds. Getting chicken manure is difficult now a days and also lot of chemicals are injected to them and given along with the foods and hence it is not safe to use chicken manure from outside.

My rice yields were not attractive in the last season, I just got around 15Kgs of paddy from close to 0.5 acre. There are many reasons why the yield was less - germination was poor and hence plant density was less, weeds were more and some places they took control and paddy was out grown, in some area cows ate some portions of my crop..But effectively I thought some kind of manuring also will boost the production like Fukuoka san did with chicken manure.

Bought two calves from a nearby market where farmers from different areas bring cows, buffaloes etc and sell it. I went there in the early morning at 7AM and should have reached there by 6AM to get the proper ones. Looked for some indigenous varieties of calves, but could get only one and the other one was a hybrid variety. I had to spend 7000/- Indian rupees for the two calves, including the transportation to the farm.

I am pretty much sure that if the number of cows in a farm increases, the fertility will definitely go down. I am hoping that with 2 cows and 9.25 acres, I should be able to achieve some balance. I will try it out for some time and if it does not work out, will have to sell the cows.

My family is all thrilled to take care of the calves... 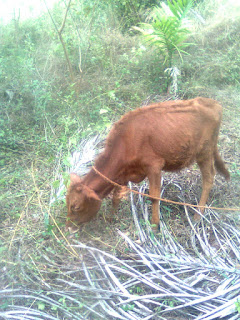 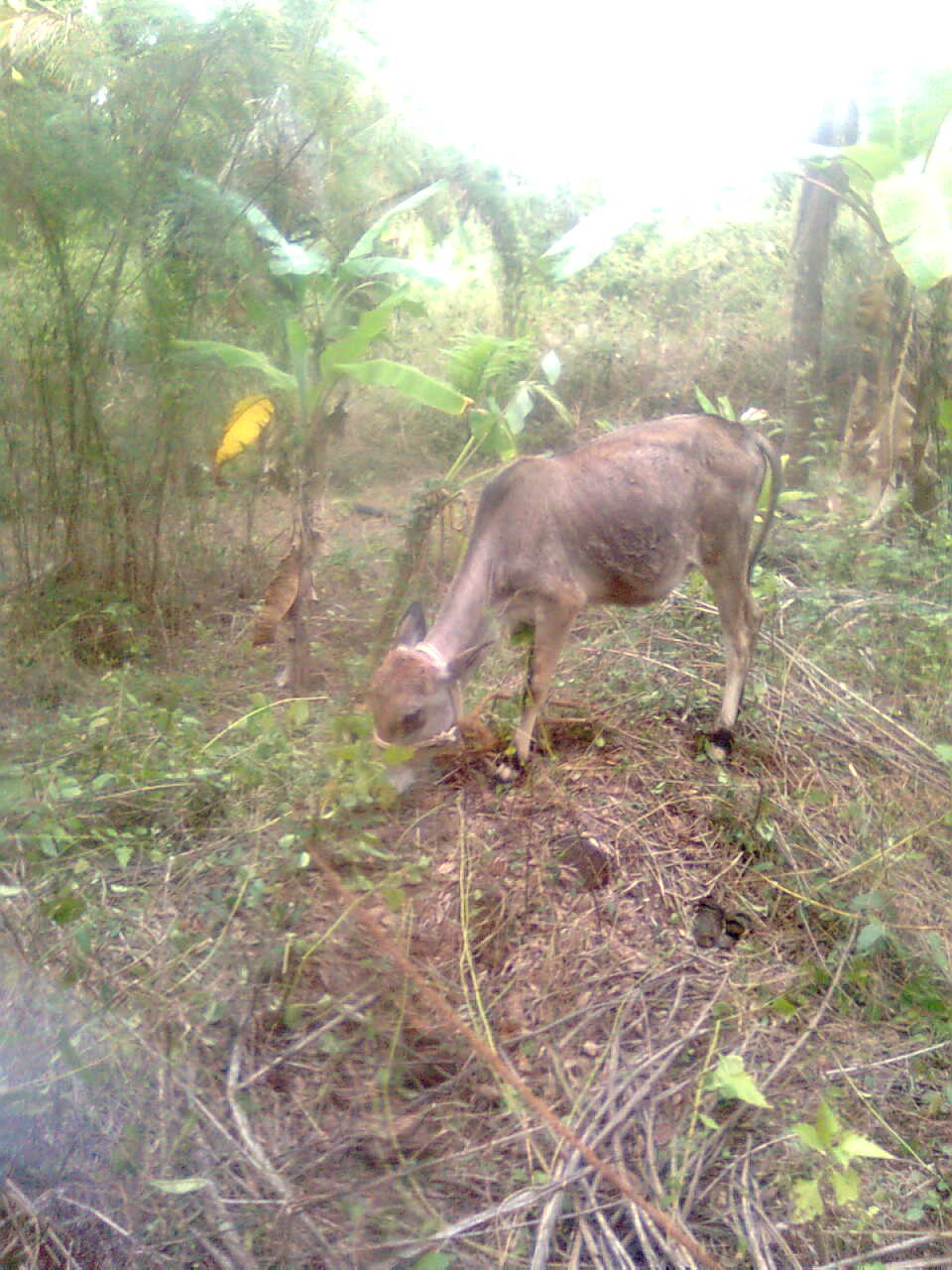 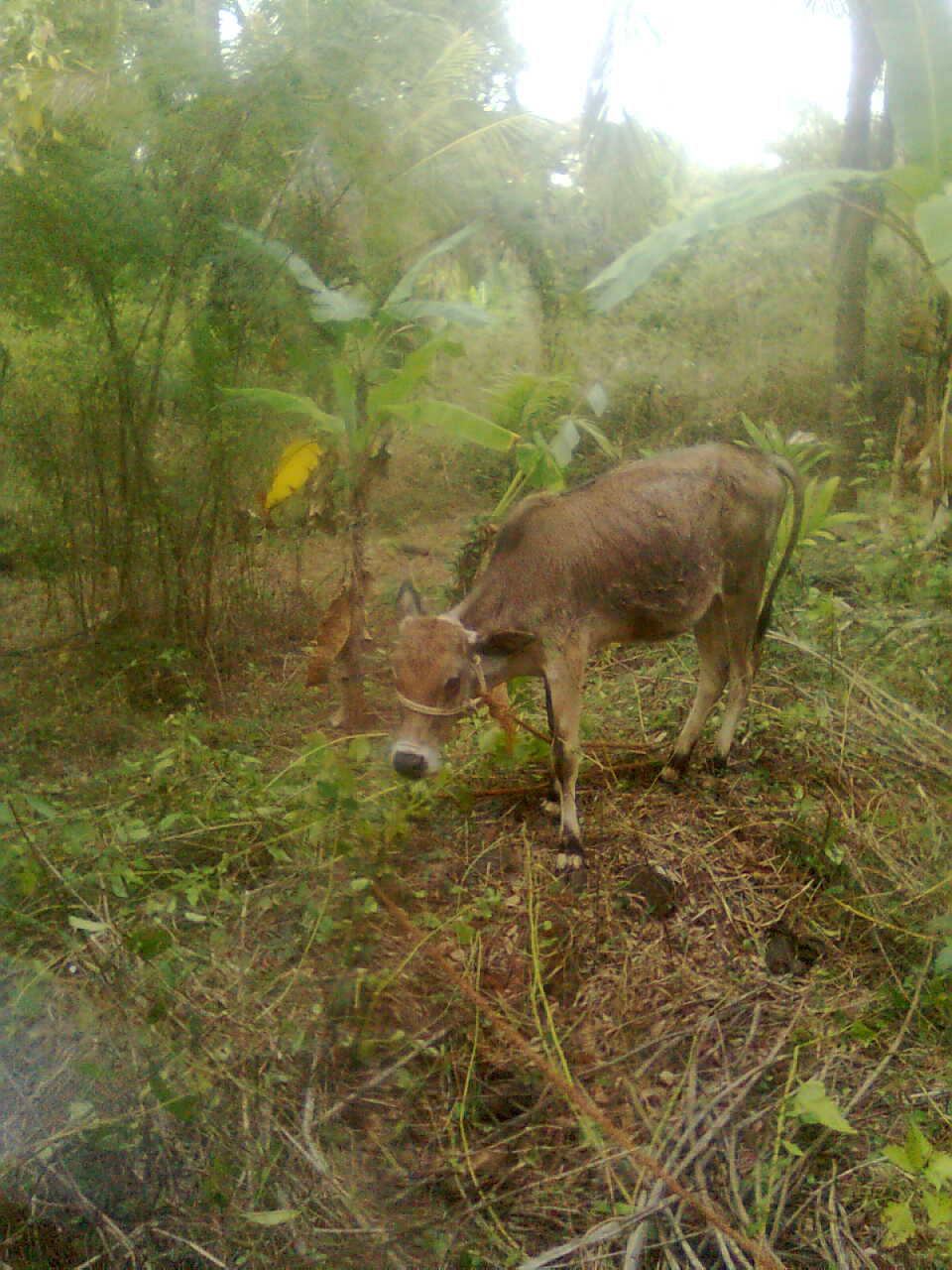 Both cows are enjoying the natural farming grass from the farm and they have become more healthy and beautiful. There is visible difference in their skin, one becoming more whitish and red one's skin is more glossy. 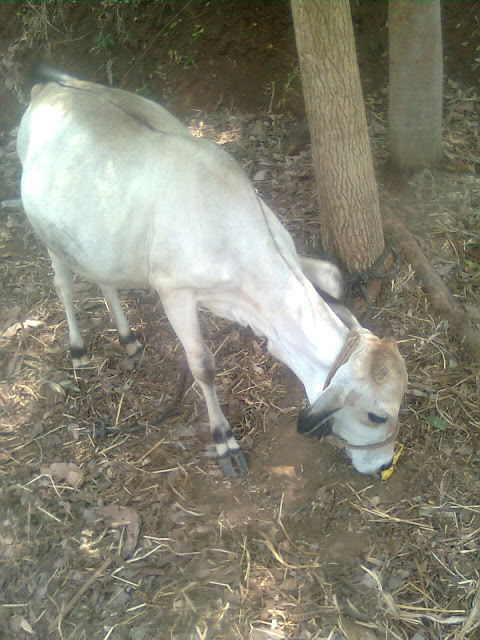 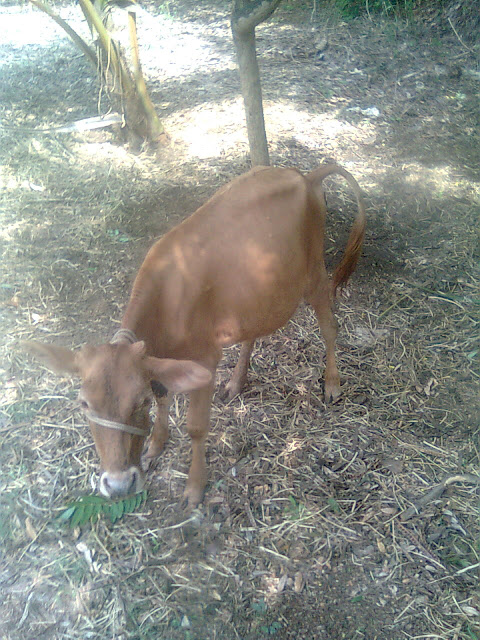 In the rainy season, they have enough to eat and looks better. Just grass/water is fed, no other artificial food so far. 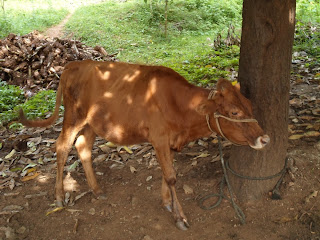 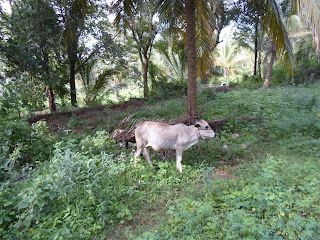 Feb-2015
my son with local cow..it withstands summer well and eats dry leaves, and whatever it can and remains healthy 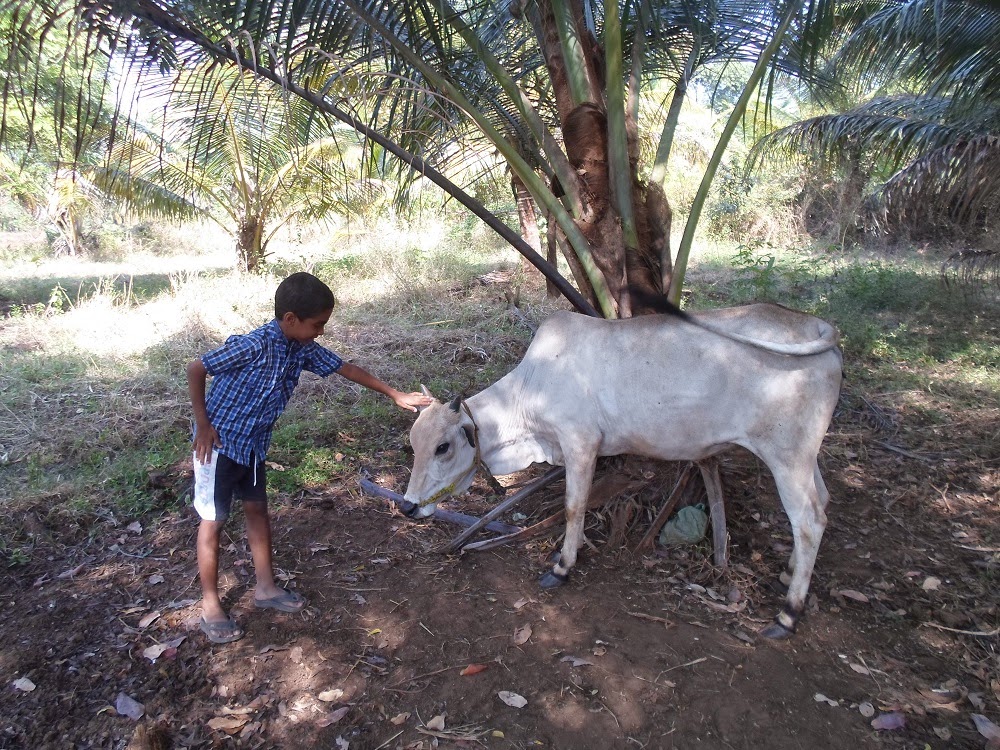 She gets affected by drought badly.. 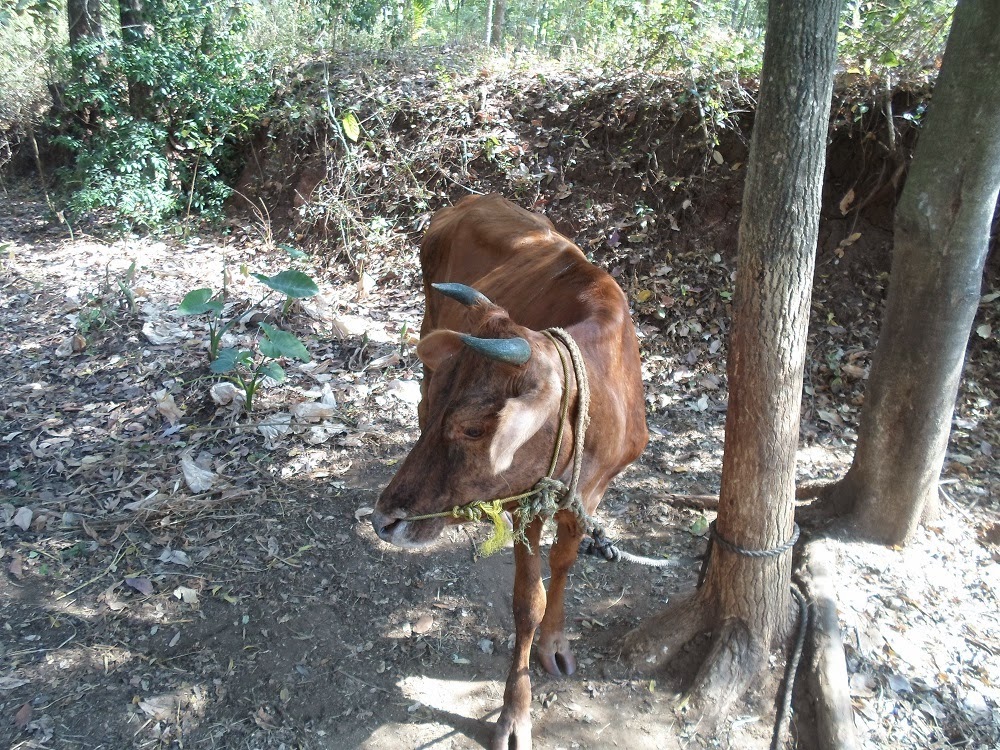 Artificial insemination was given to her by local veterinary doctor as of Aug 17-2015. 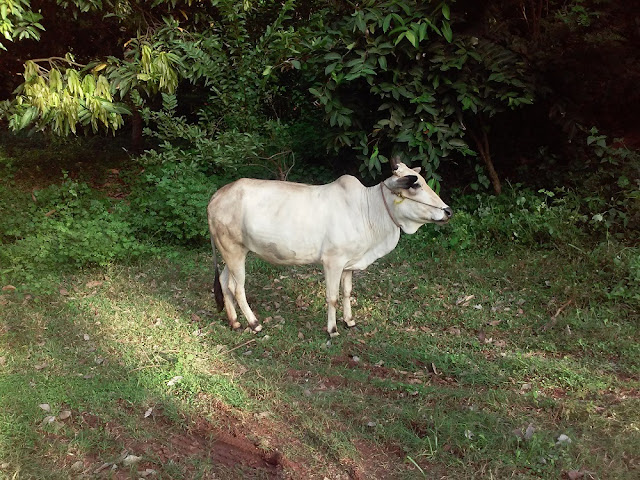 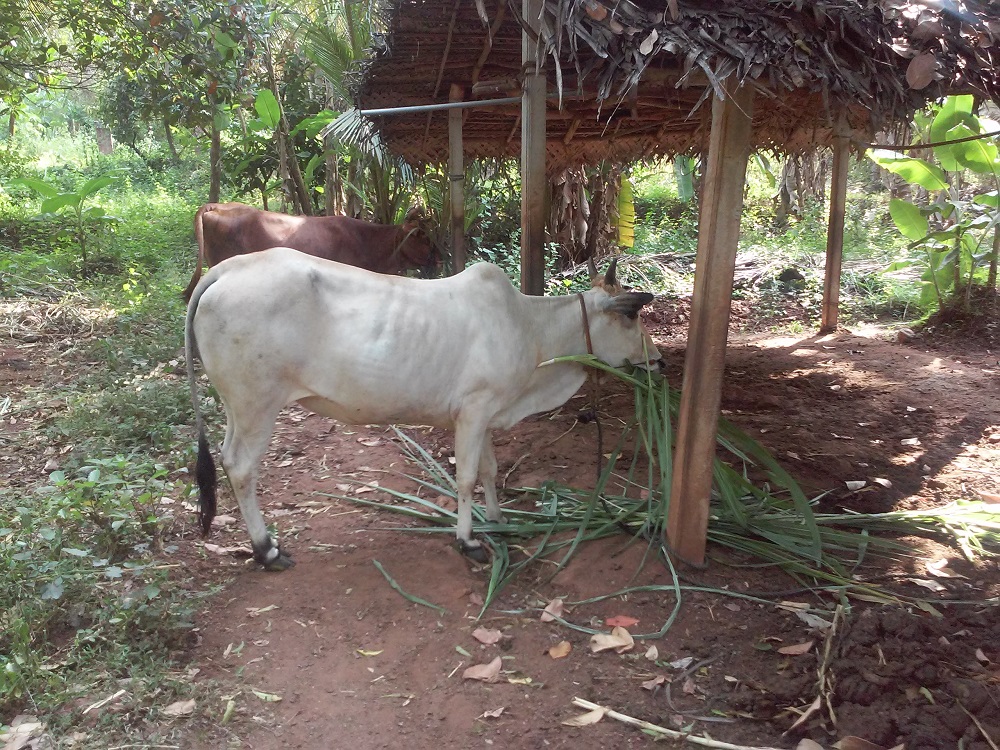 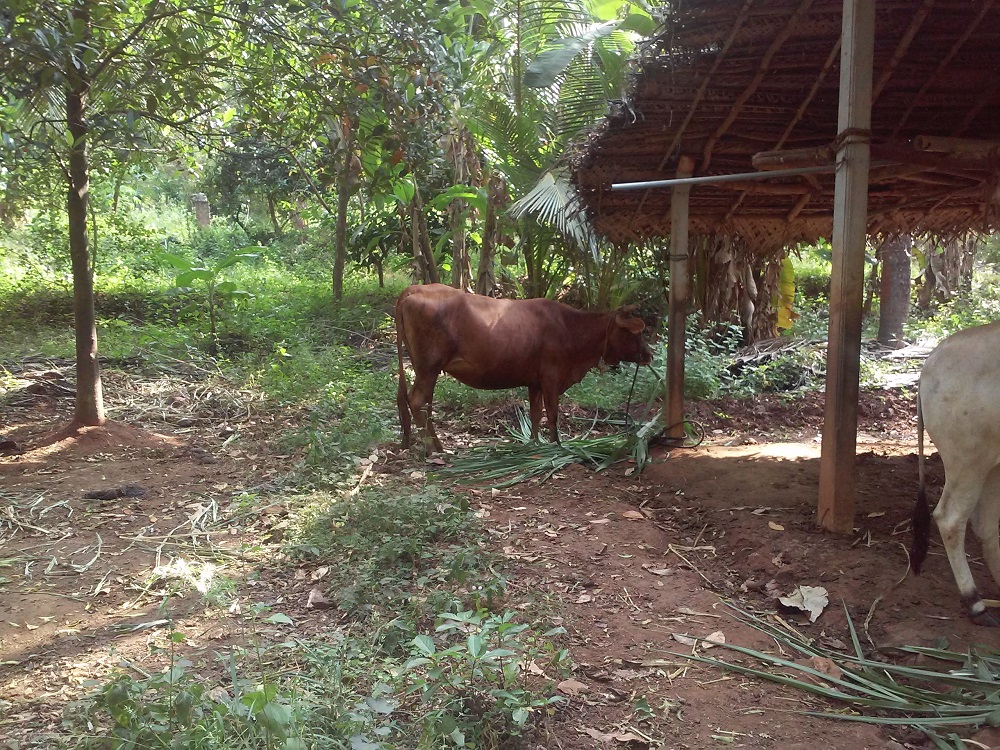 The red cow has given birth to male calf. My kids were excited to see him and initially the calf was uncomfortable with us, later he became good friend. 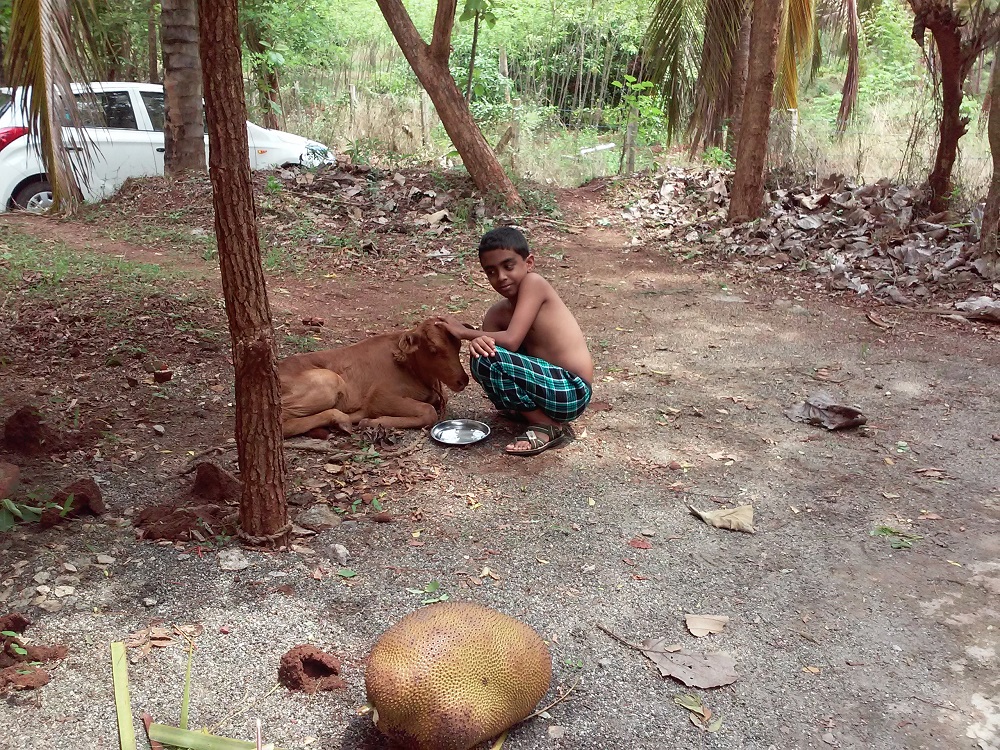 White cow also has given birth to a male calf....She is quite concerned about his son...when moved to another place for grazing, she just looks for him and does not eat any thing..if you touch the calf, she makes some sound.... 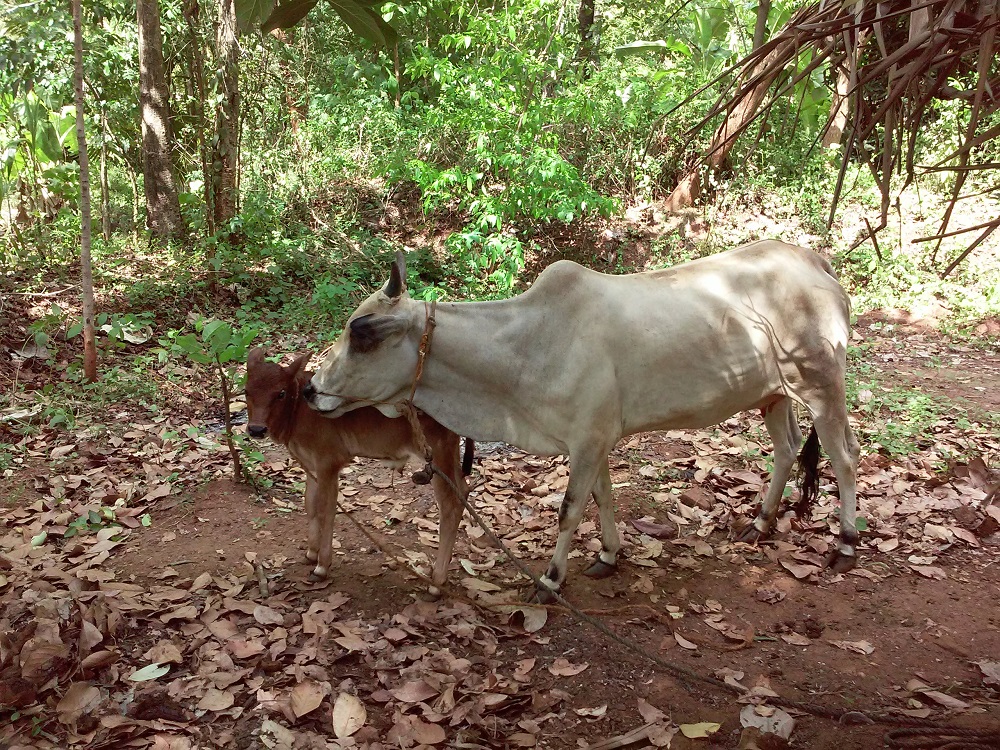 
Our cow (Ammini) was finally sold to Radhakrishnan an organic farmer in Palakkad. She was not getting pregnant and finally as per expert advise, she may need a bull nearby and artificial insemination is not working. I wanted to sell her to an organic farmer who can take care of her, so sold at a price of 12000/ rupees which is much less than the market price. She gave her some good memories to cherish, especially for my kids.

Posted by Nandakumar at 3:02 AM

I fell the indigenous breed is also not pure. It has fur like hair coat and hump is not that prominent.

they both need deworming.

Thanks Anoop. True, that may not be a pure indigenous breed. Pure indigenous breeds like Vechur, Kasarkod kullan etc are costly so went for the cheaper option. But at least it is able to manage the hot climate and eats whatever grass is available.

Yes, will do deworming for them.

I am aware of exorbitant prices for vechur. What are the approx price of kasaragod in Palakkad area.
I own a kasaragod cow. check the below link.

Yes cows are like scavengers in rural India, it is all about surviving. they can eat a lot of stuff when fresh grass is unavailable.

I know a farmer from palakkad, not sure you may be aware of him. He should be able to source you a umblachery cow.

I don't know the exact price of Kasargod in Palakkad area, since it is rare, farmers charge a premium. The Kasargod cow looks really good.

Right now I won't go for the rare breeds since I don't live on the farm. My cattles will be alone at night without anyone to take care of them.

Give the details of the farmer in Palakkd, will meet him some times.

Where are you located?

Firstly Thank you for all updates, its been good learning experience for me. I like all the posts and mostly the images you upload.

I have question out of curiosity, do you have fence around the farm. how will the calves manage or wont they graze paddy fields. since I understand that you only visit during weekends. Is there some one to look after ??

Thanks. Yes, I have one person to look after the cows and he is my main worker. Paddy field does not have a fence, but he manages that. Some other crops gets eaten once in a while, so I am seriously thinking to sell them, but I have some attachments with them now. It gives a good feeling when there are around.

I just started to read your blogs .It is very motivating and inspiring .I hVe doubt here heard artificial injected in cow for calves will spoil its true ness.Is that true

It is difficult to get a bull, that is why we go for artificial insemination..the time has changed, we have to go with what we have, not much options..

Loved the pictures of the cows. you can differentiate the indigenous one from the cross bred, lust look at the top of their hip portion. the way they are curved.