I wanted to construct a small house in the farm for staying in the farm on weekends and also when more work is there and also for accomodating some guests. As part of this, 3 years back I started the work of an open well. In one summer it was dugged to a depth of 19 feet and there was no water and work was dropped. There was rocks at the bottom and it had to be blasted, so the work was stopped. Next year, got another team of labourers and brought one team for blasting the rocks. They bring the compressor in the tractor and make holes in the rock and put the explosives and then apply some eletric trigger and blasts the rock. The explosive is put at a depth of 2 feet and hence each blasting clears a depth of 2 feet.

Again after reaching a depth of 25 feet, there was no water ...and neighboring wells have water. They just dig another 2 feet in just one place to see if there is water, but there was no water, except that soil was little bit moist. In the 2nd year also the work was stopped.  I brought a person who uses some sticks and see the presence of water. In the well position, he didn't show any possibility of water and he suggested another area, but he also suggested since I have reached this depth, it is better to try another few feets.

This year, in the third attempt, we digged further with blasting rocks with explosives. And after reaching a depth of 30 feet, there was water !!!. I was so happy to see the water dripping from inside...We blasted twice again and now reached a depth of 33 feet and there is around 2 feet water inside the well. Hope there will be water till May and after that rain starts.

The farm has complete mulch every where and earth worm castings are also seen in lot of places. So I am assuming, there is lot of water going inside, but still planning to do a recharge using small pits made here and there so water can get recharged easily.

After couple of days, when we measured the depth of water, it was 4feet+, it is unbelievable and felt so happy.

Here are some photos... 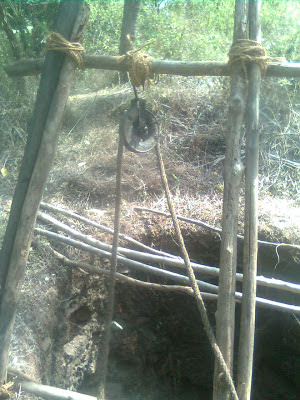 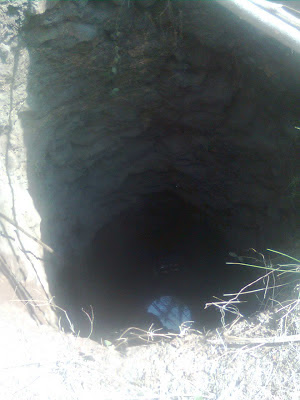 2013 rain was good and open well had recharged nicely. But 2014 summer is also going strong and open well at my house has gone dry and I could see nearby ponds also are going dry. But to my surprise well at the farm has still some water, at least 3-4 feets. I am planning to put more recharging pits around the well this time.

2017-May
2016 rain was bad and estimated to be less by 40-50% and summer is very severe, most of the ponds dried, lot of coconut trees have dried. Well dried up in September, also it never recharged fully. I have to carefully tap all the rain water and put into sub soil. Planning to make trenches to redirect rain water and evaporation loss by sun and wind will be minimal and humas formation will be maximum at this condition, and humas holds lot of water, so trees will have more water available.

Posted by Nandakumar at 9:35 PM

I am in process of digging a well, but before getting into thought of clarifying few tasks

How did you choose the location? with water diviners help? If so scientific or manual?

How much it cost approximately?

two inch water is sufficient for one day?

Well does not have water on this summer !!!. Last year rain was less...

I didn't use any diviner, just a carpenter showed the place for well, which is adjacent to the house.

Later I brought a diviner and he said, there could be water....and he showed another place, but didn't try it being expensive.

Hi please suggest technique to remove hard rock from well with water. We are in trouble. We cannot use blasting since the building foundation is nearby

nijuk, even i am struck, after digging 10feet, its completely rocky zone, didnt have any idea, so i made it as big pond kind of stuff after calling jcb,

U can put panai maram on the top of the well...

How does that help manikandan.S?

Sorry being late to reply, but I was not having any solution