This year monsoon started by around June 6th and some pre-monsoon showers were there by May 2nd week. But monsoon is not picking up the speed, it is just one or two rains, but climate is coludy and cool. It is raining well in South, but in Palakkad heavy rains are missing....what could be the reason???

While talking to some lady workers they mentioned about a farmer in nearby location who uses a machine to put seeds in straight line and it works very well for him. His name was Appukuttan and locality was Kurukkan Kulumbu, and could locate him easily. Saw the drum seeder and later asked him if he can rent it for a day, and he has agreed.

According to his advice, put seeds in water for 36 hours and then leave it for germination for a day.  Field is readied by using tractor, same old Mohanan came and did the ploughing using gauge wheel. 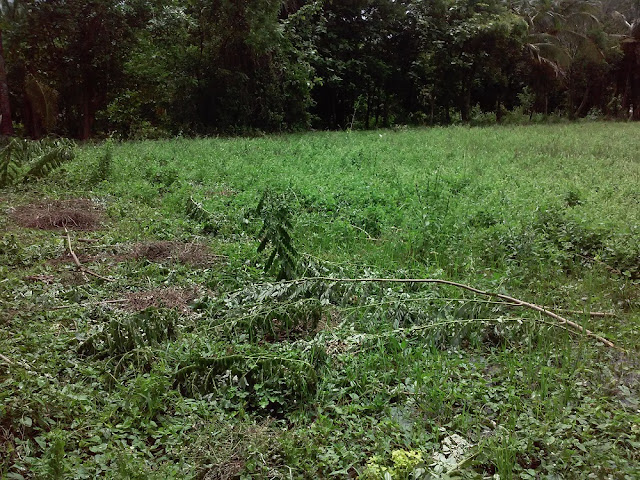 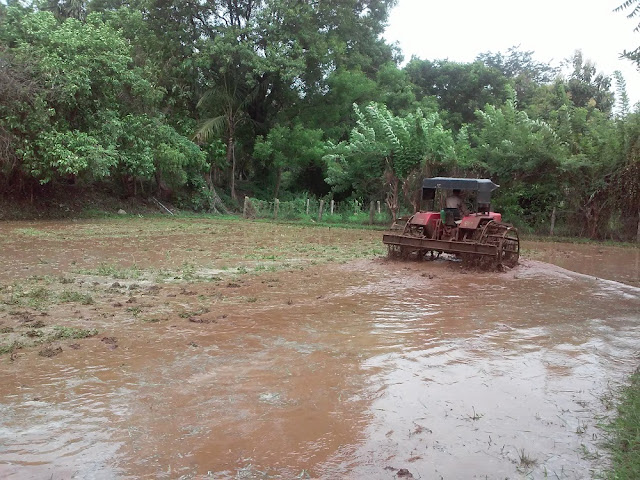 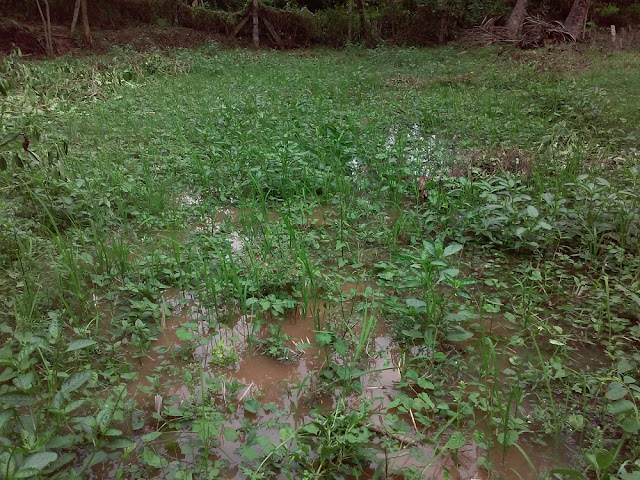 In one part of the field, rice from previous harvest is growing...may be this can be nurtured to a crop? 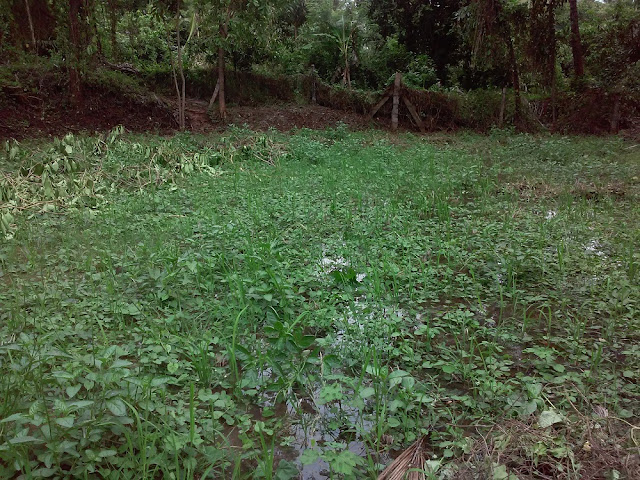 Seeded using a drum seeder given by the neighbor for this trial. Line distance becomes 20 cm and in each line around 8-10 seeds fall at around 10cm. There should not be water in the field, but this condition was not met in all parts, water had to be drained in advance, taking small channels from where ever water had collected. The operation is quite smooth, and looks to be the ideal way for sowing seeds. Also there should not be rain for couple of days, so it looks like, this should be attempted before the heavy rain starts. 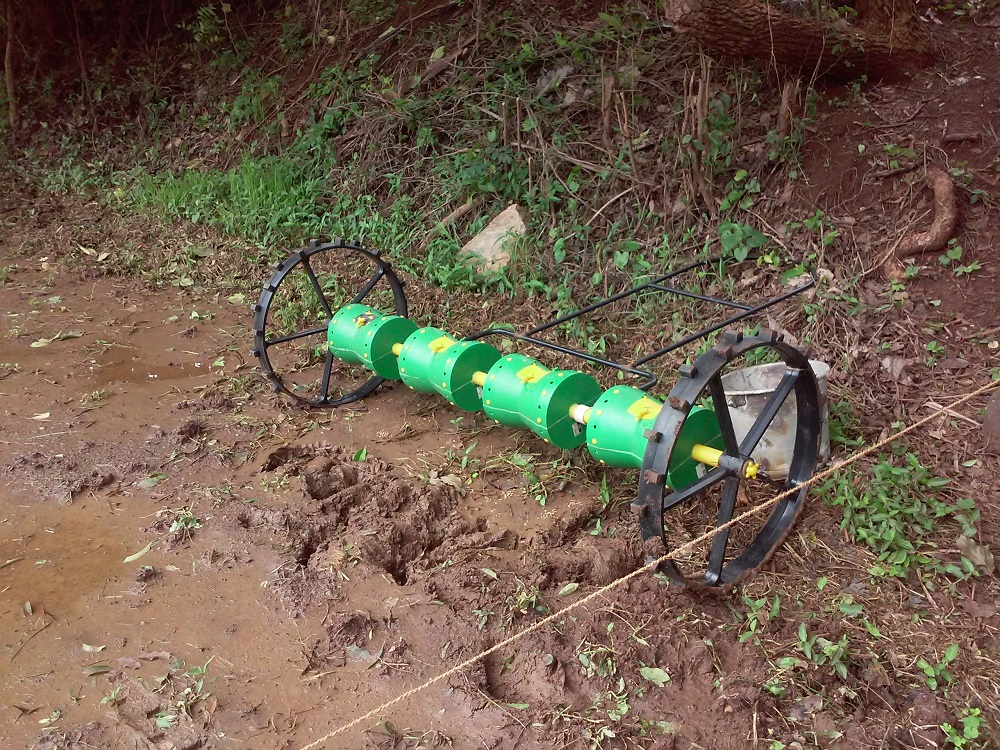 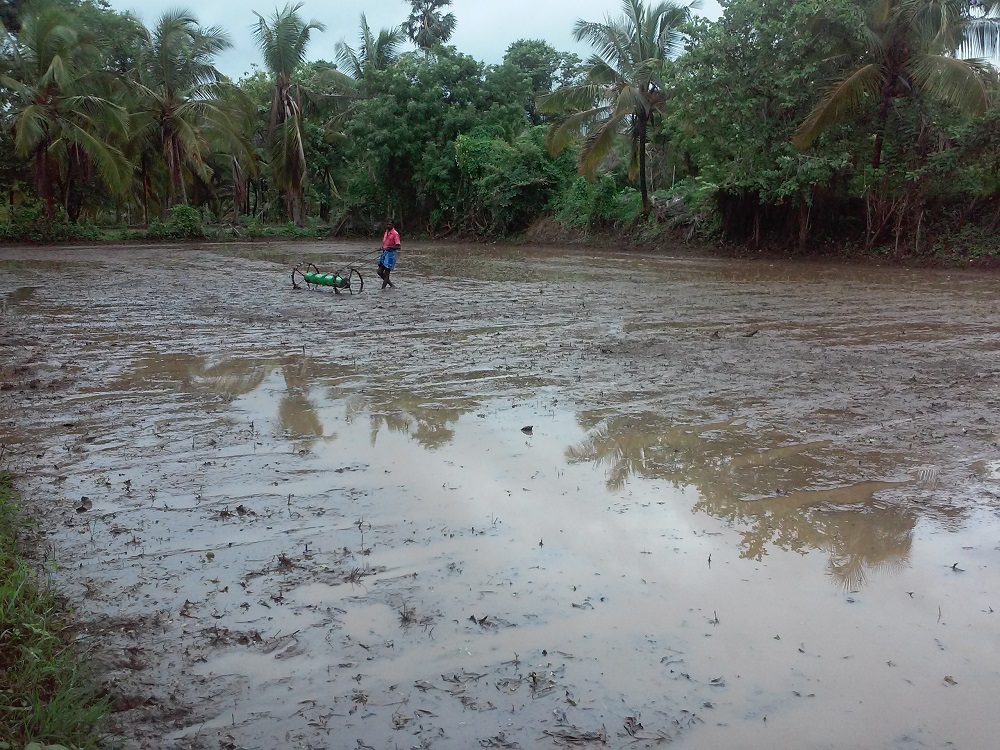 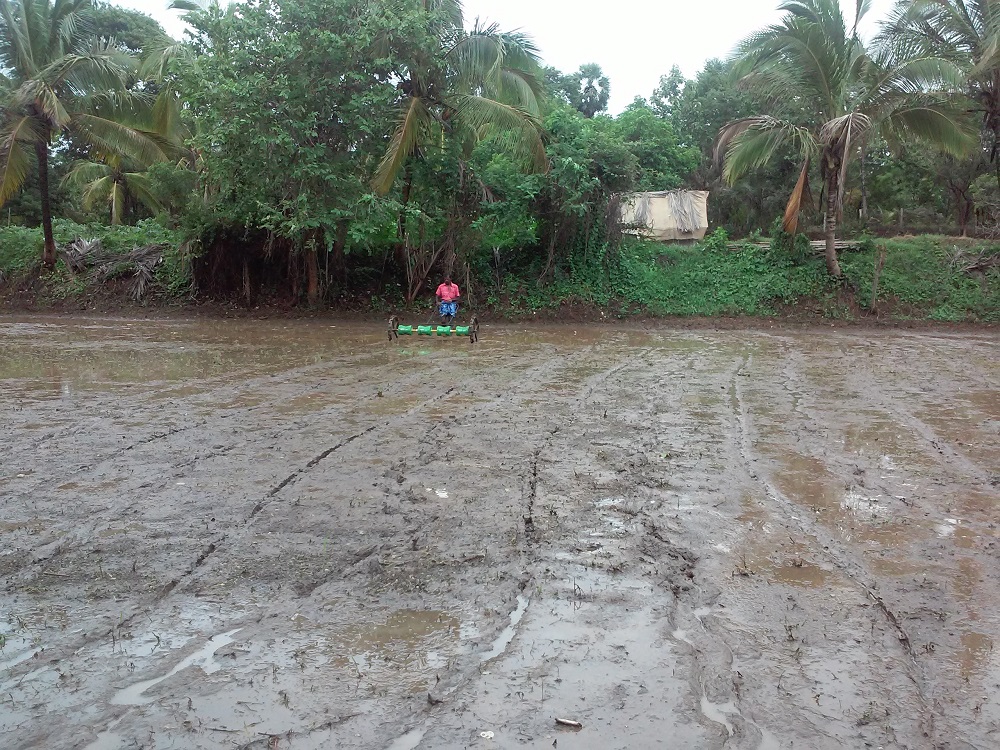 Rice seedlings are growing....germination rate is good and line is also fine, except some areas...water had to be drained completely before sowing...weeds started growing..next challenge is weed control... 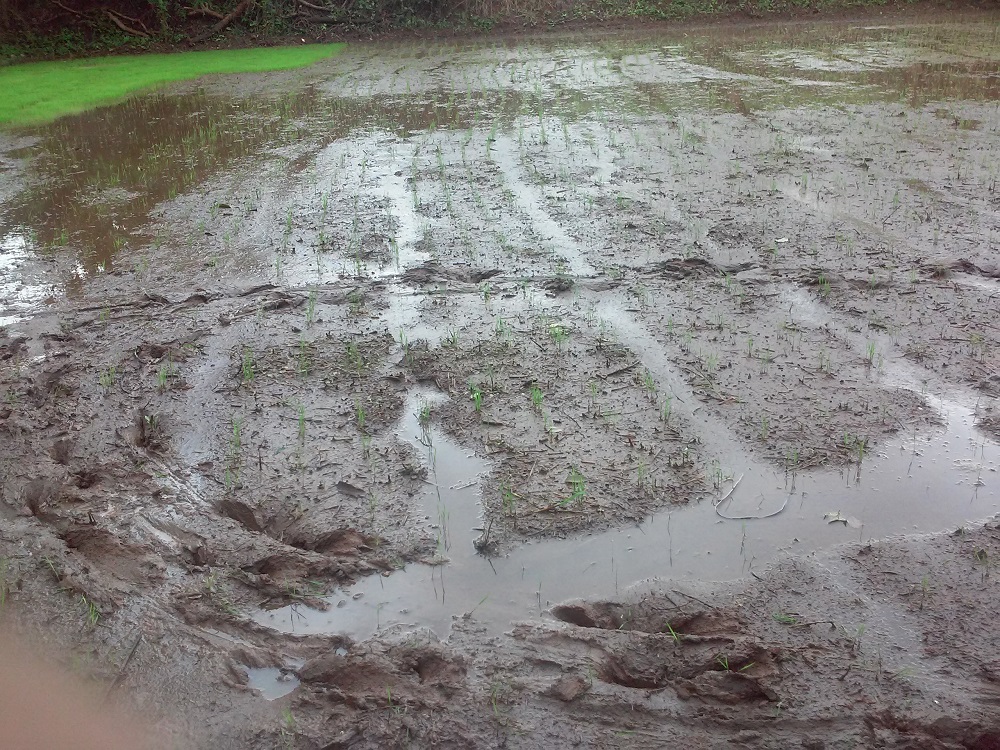 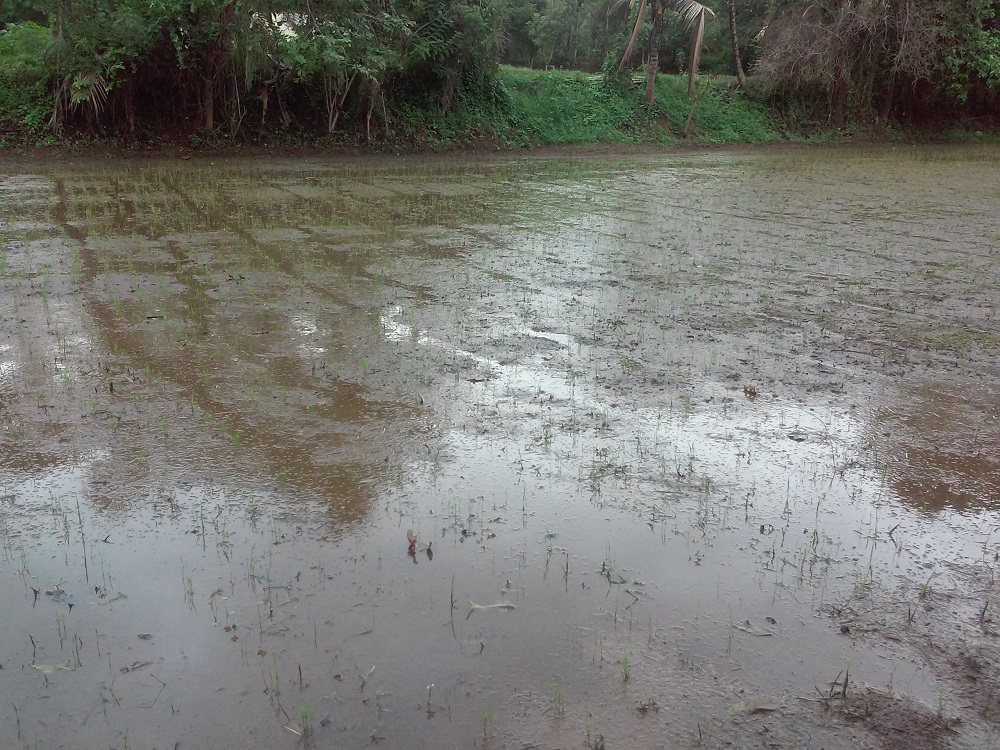 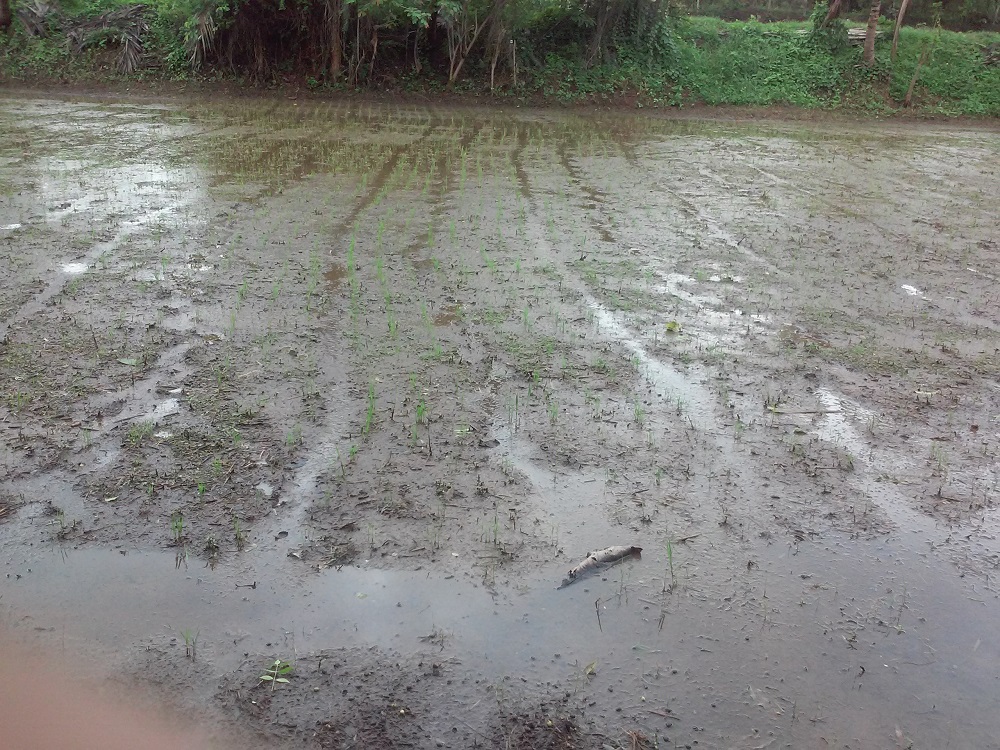 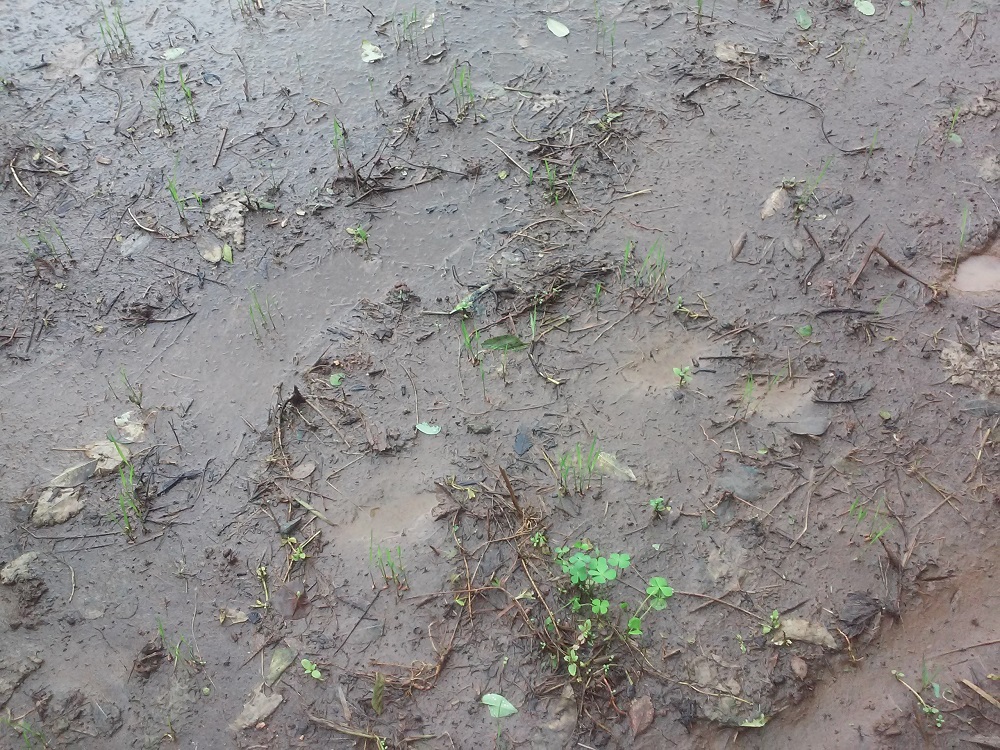 Lines are becoming more visible...some places rice plants are missing, they will be repaired from a nursery maintained.... 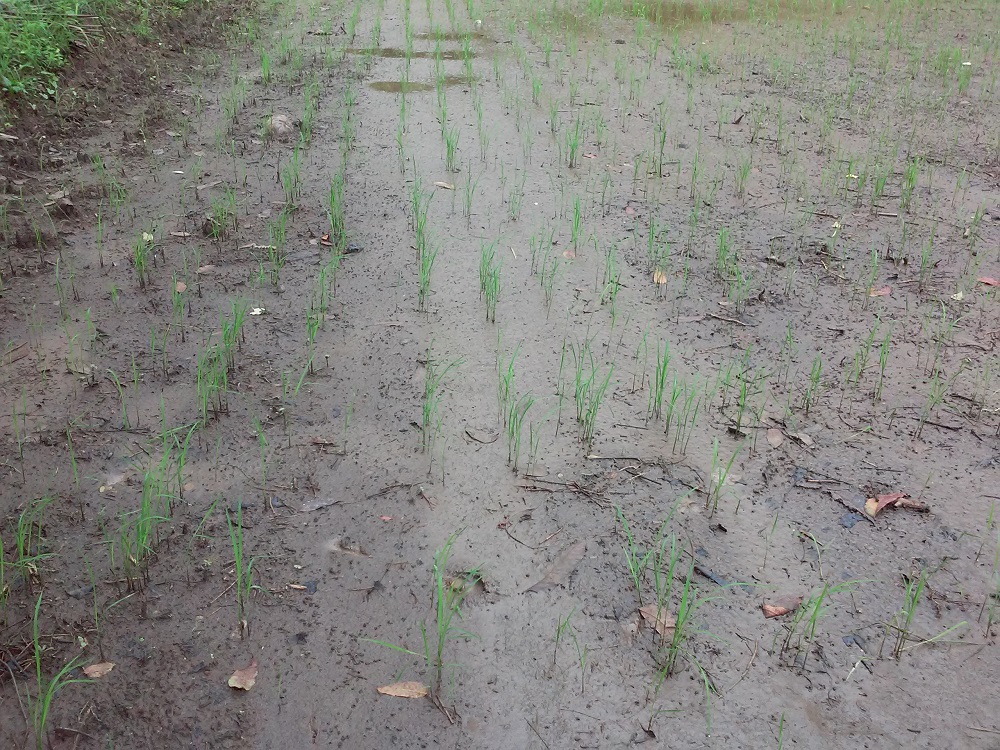 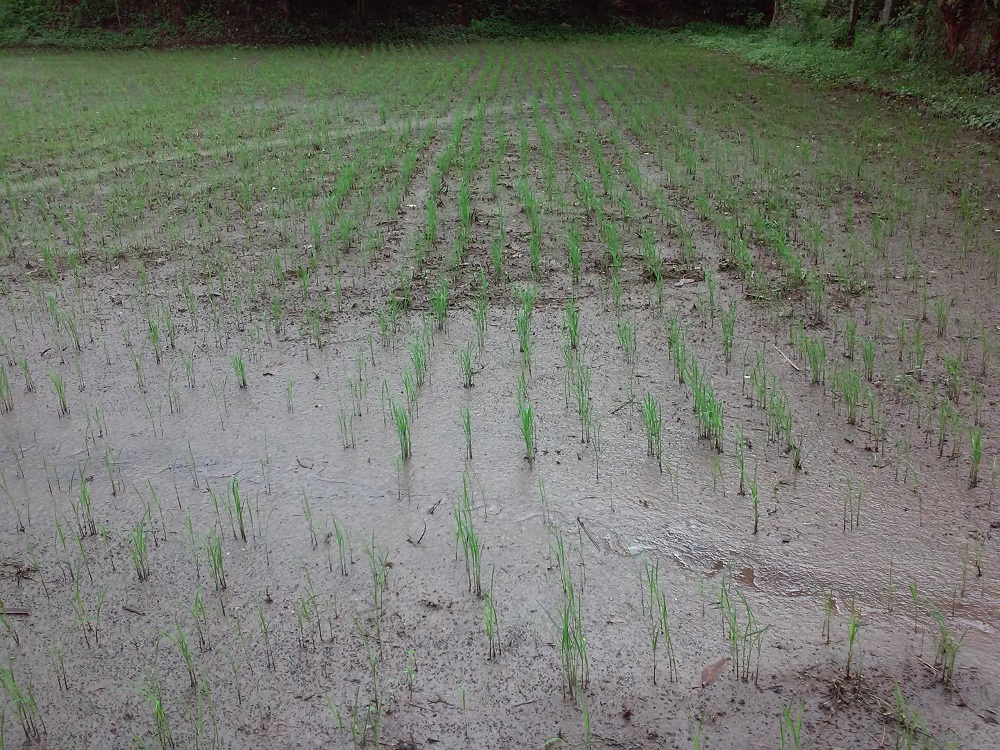 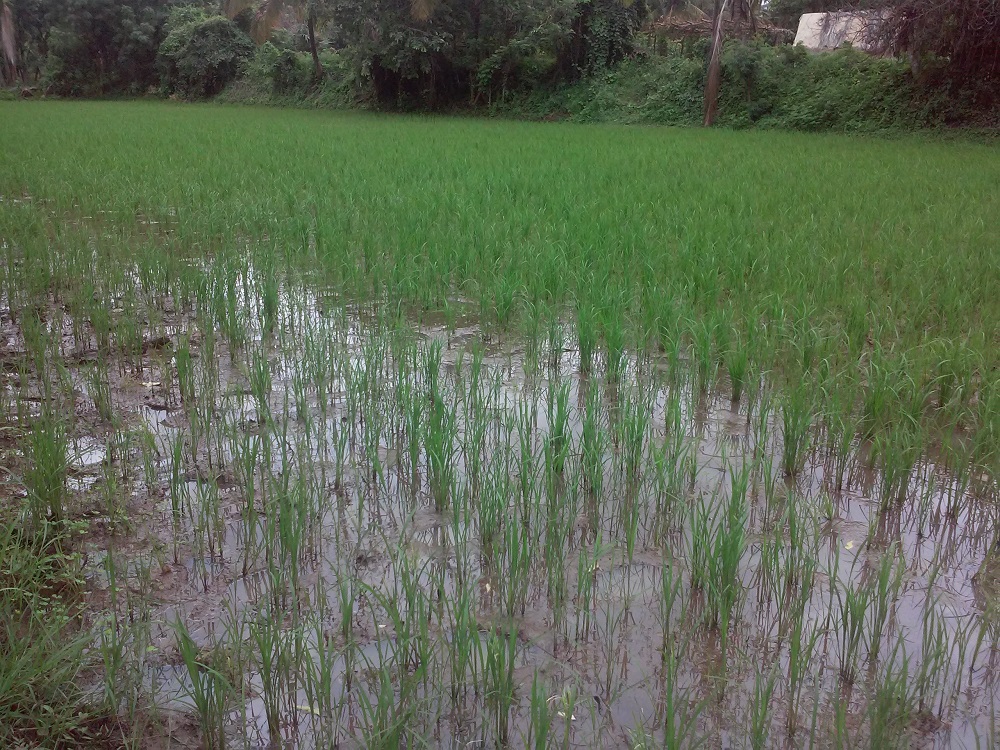 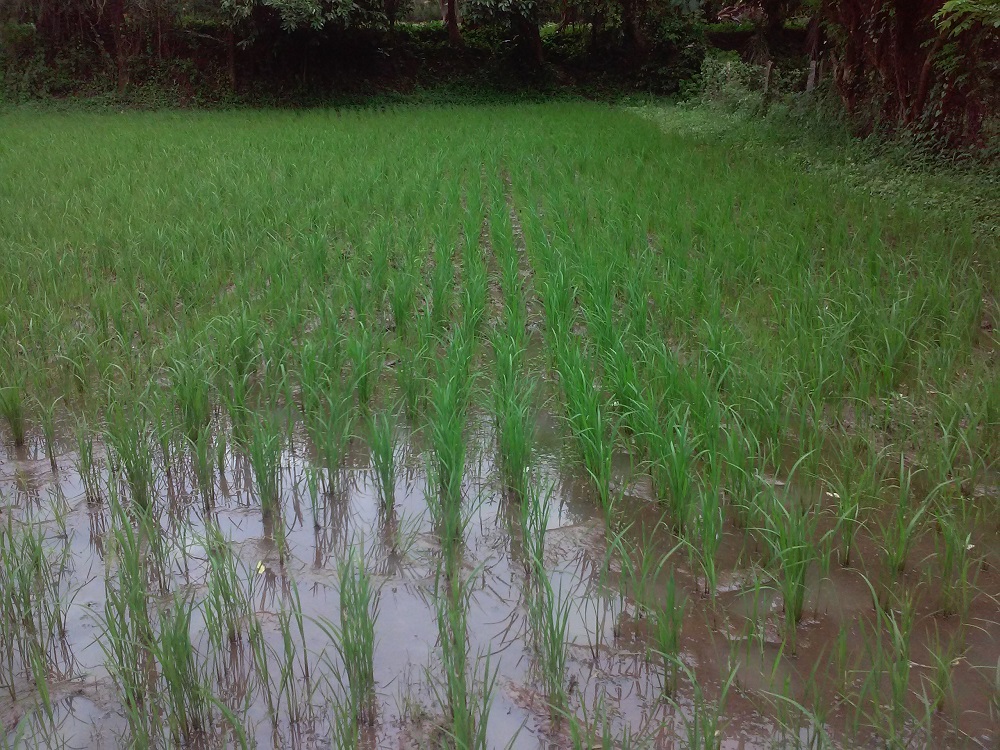 weeding completed..not much rain, so watering from pond on alternate days... 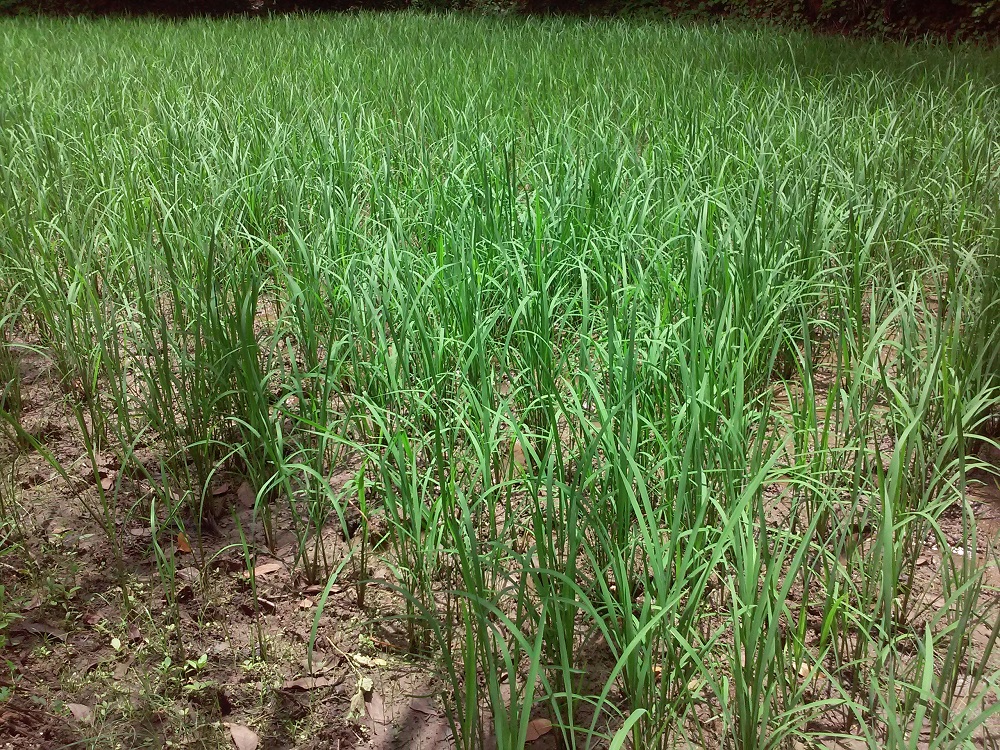 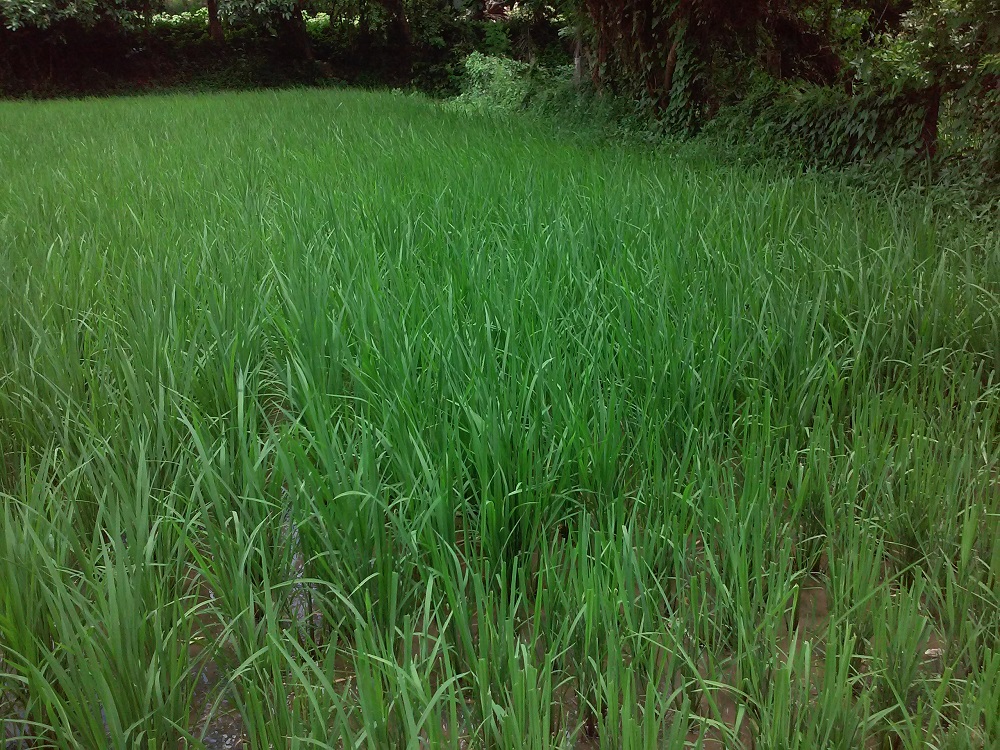 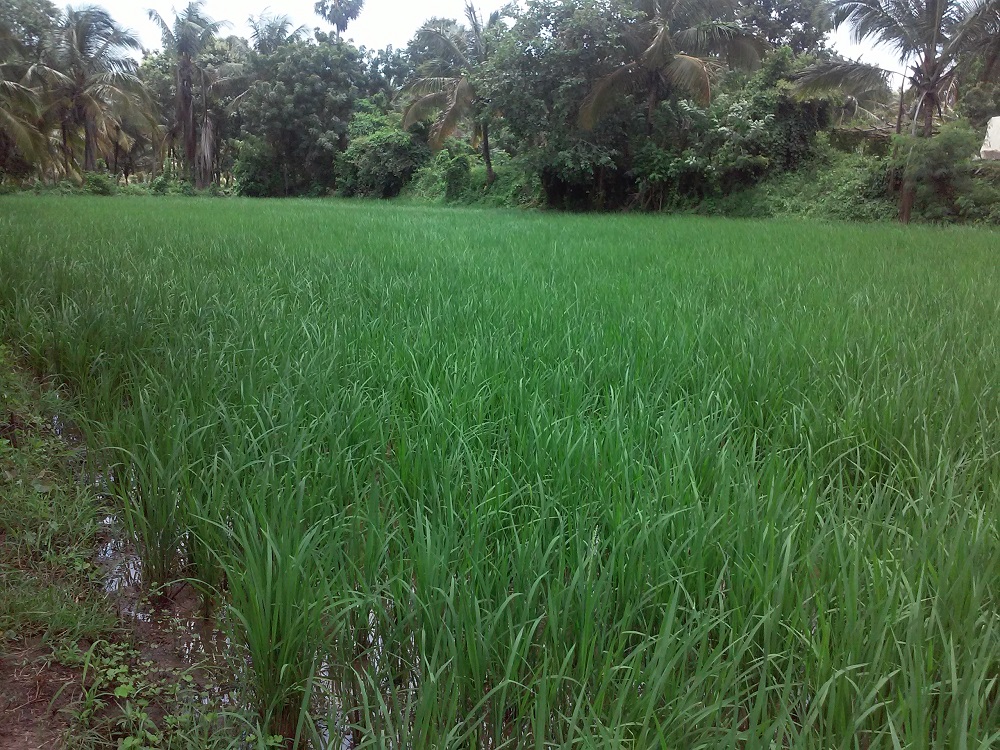 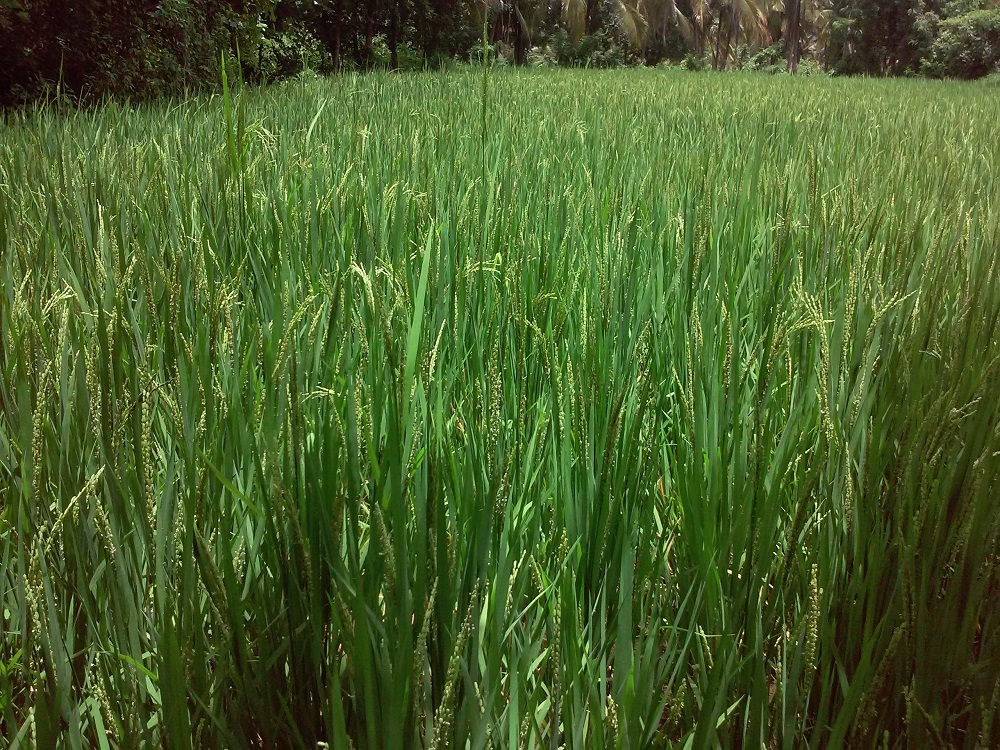 Flowering is completed...tillers are less and hence field is not very thick...but reasonable...cowdung slurry application was done, just once.

Harvesting completed on 8th October...Yield is not so good, got around 450Kgs of paddy. The straw was spread on the field, I did it all by myself, it was a complete day job.
Posted by Nandakumar at 9:24 AM

Which seed this time?

Which seed this time?

Forgot to mention that, it is Kunjukunjuu this time....

Looks like you had good quality seeds. the paddy appears uniform.
Have you processed the paddy and eaten the Kunjoonju rice? I love the taste of it especially newly harvested. As it gets old it can become a little hard to cook.
Have you saved any seeds?
We are doing njavara this time. There was severe water shortage due to lack of rains. so just about 15 cents of land, half of what i've got. now it is the flowering time. This time I am planning to save the seeds, not sure if we can do next crop, again due to water shortage. we used only the cow dung and urine from my kasargod dwarf. For chazhi we have used 50 kilos of veppin pinnakku.....hmmmmm... bit expensive. If it doesnt work we will spray veppenna.
Obtained the seeds from Wayanad 1000 rs for 2.5 kilos.Looks like lots of people are interested in it.