I had two cows in the farm and the traditional one was brought to home recently since looking after them became difficult after they gave birth. It was excitement at home to receive them, since this is the first time we are having cow/calf at home. We were not well prepared, since shed was having problems, sides were open, ground had no slope, no place for them to feed the grass/hay...

Slowly all of these problems got solved..Finally milking was a problem, since she does not allow and just kicks, some times sideways. I was scared how to handle it...finally put a bamboo pole and then tied her one leg and my wife calmed her by holding and I could milk..Suddenly we had lot of cowdung at home..instead of piling it, thought of using it completely so that premises will remain clean. Made slurry by mixing water and applied to all the vegetables ..and they are growing quite nicely...Initially almost daily I put the cowdung slurry, later reduced the frequency. People say, the microbes in the cowdung makes the land fertile, anyway the effect is magical. Here are some photos.. 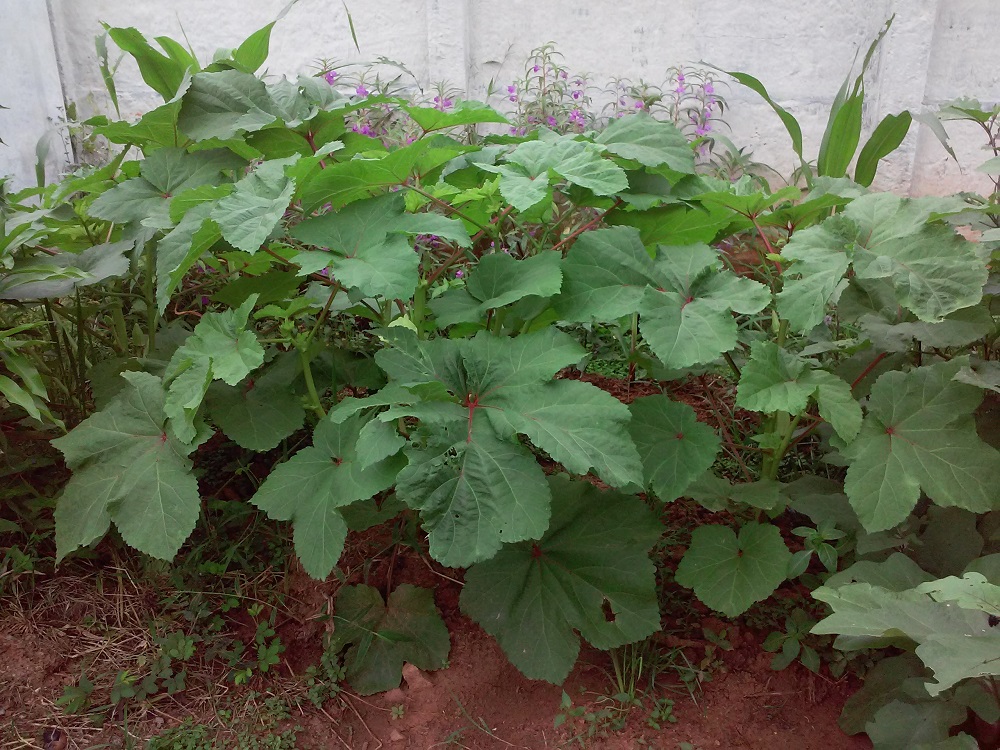 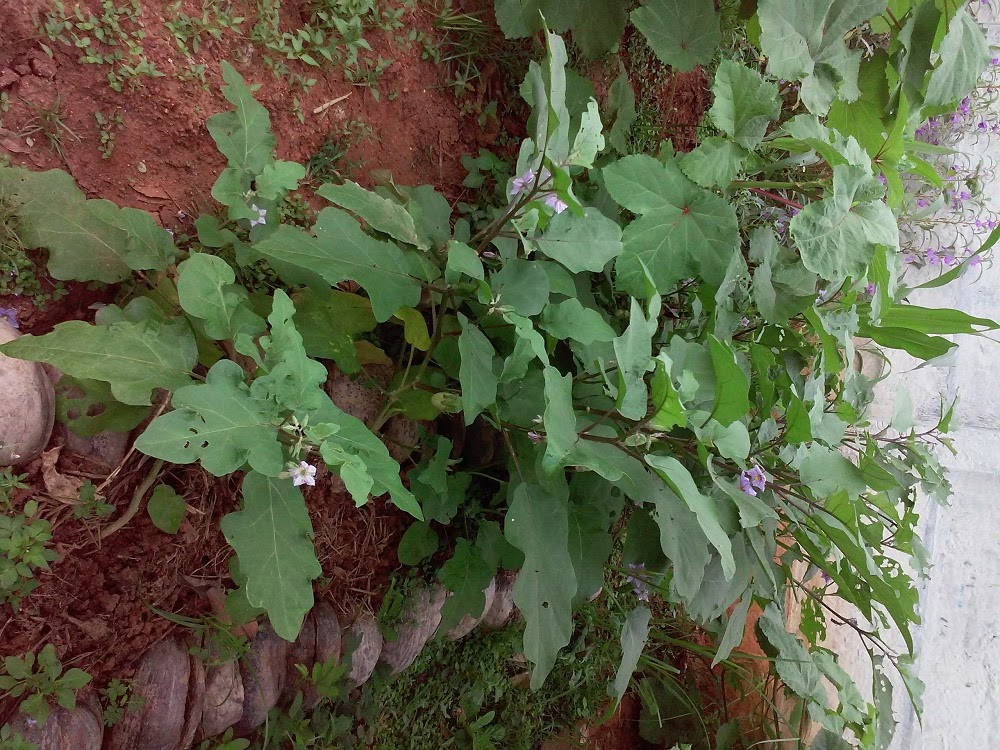 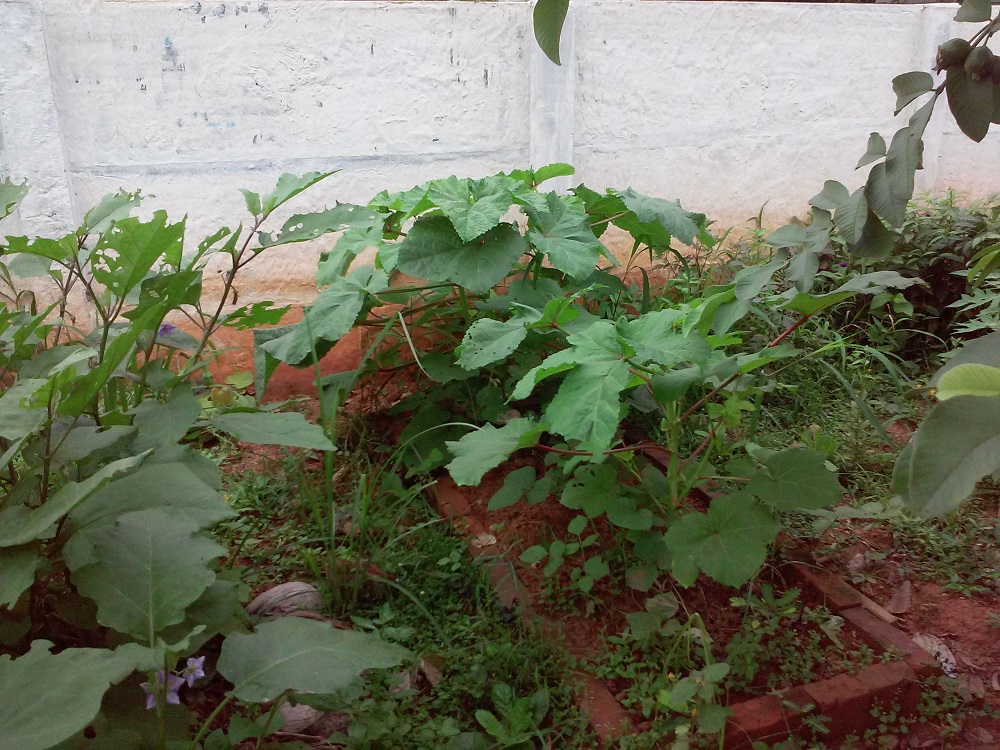 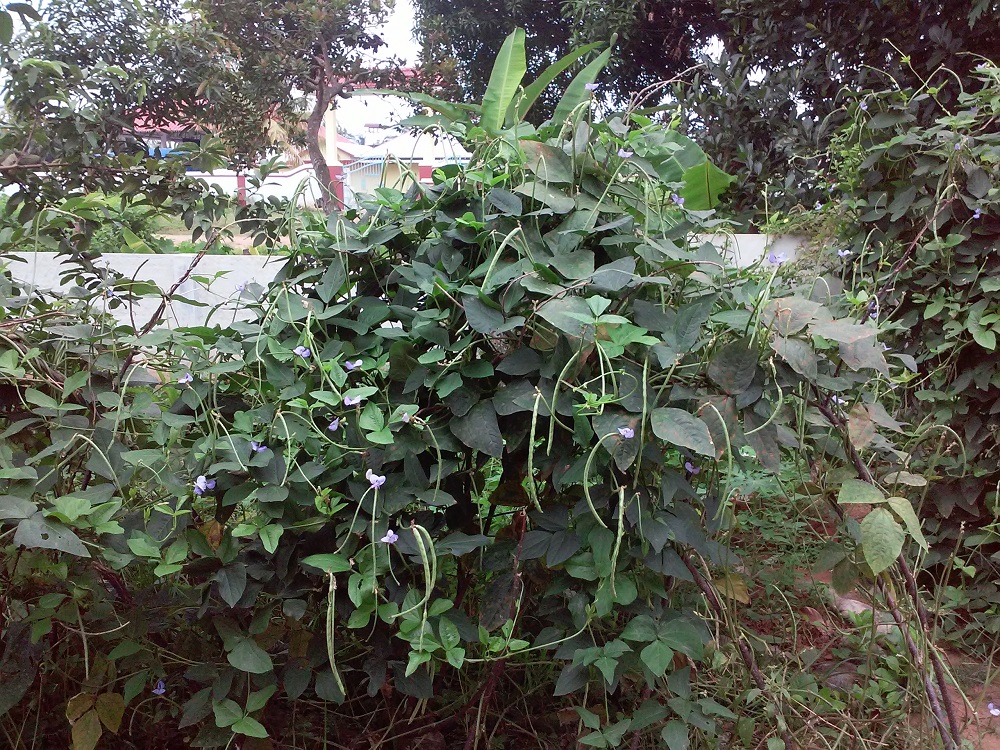 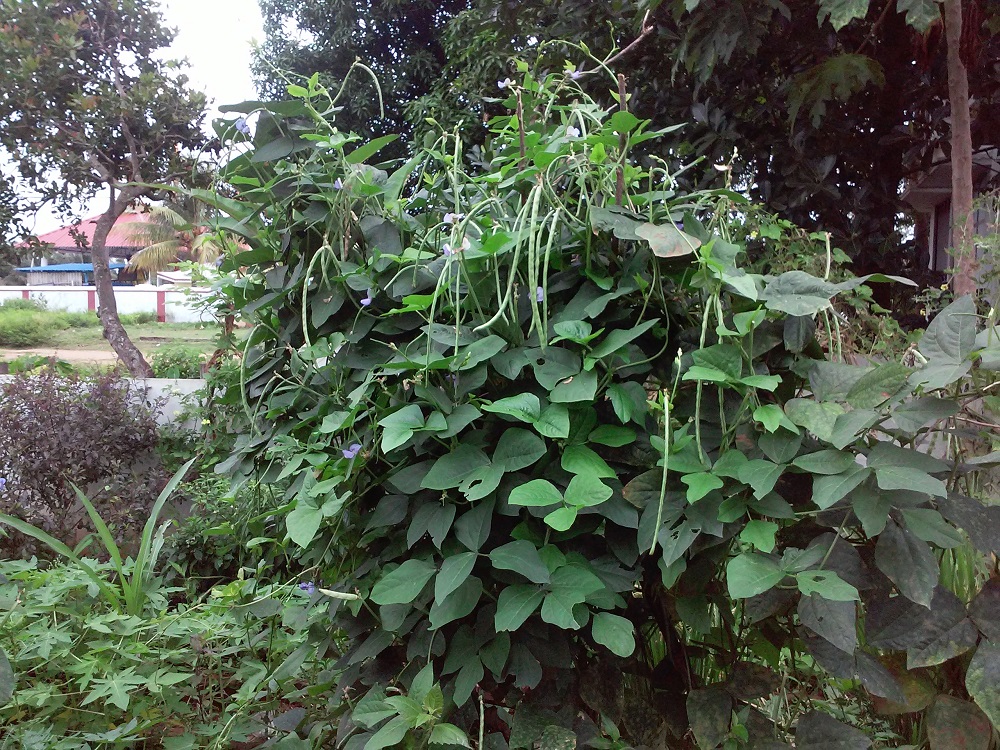 She was scared of us even after 3 years at the farm, but our interactions were limited. When she came home, it continued, she will move back when we approach her, slowly it changed. Now she is at ease with us, when others come, she will move near to us. She has been named 'Ammini' and her boy is named 'Appu'. 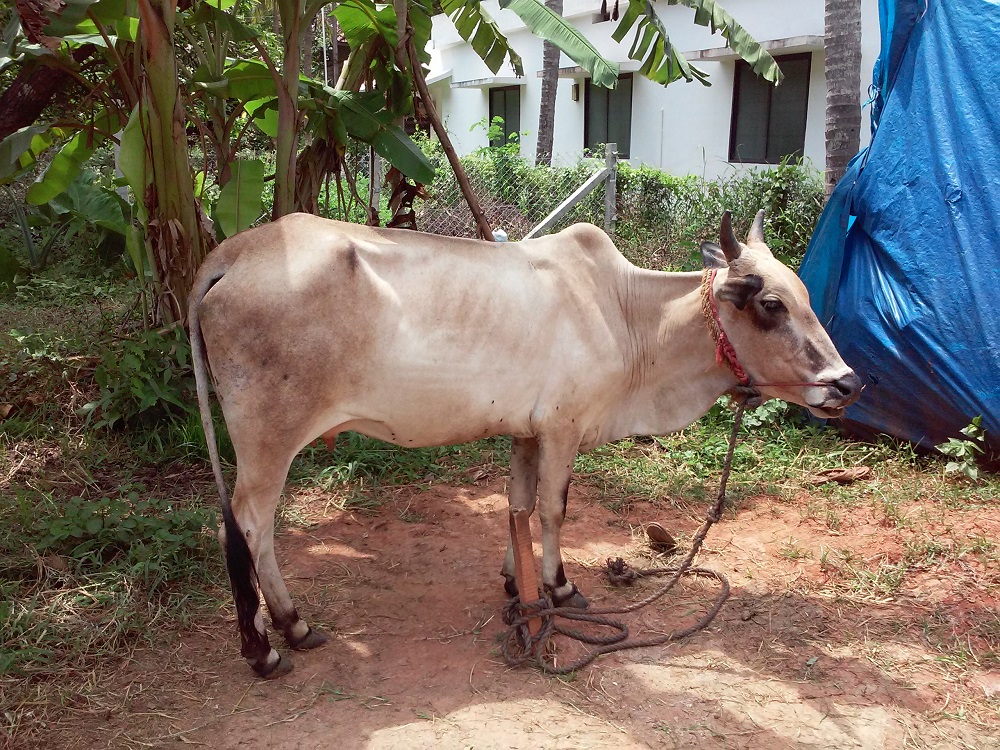 He is quite strong, has to be very careful when we are near him, he just pushes with his head. Once he jumped a fence of 4.5 feet height without any issues. He is bubbling with energy. We can not handle him longer, so ready to donate him to some one free of charges, provided they take care of him. 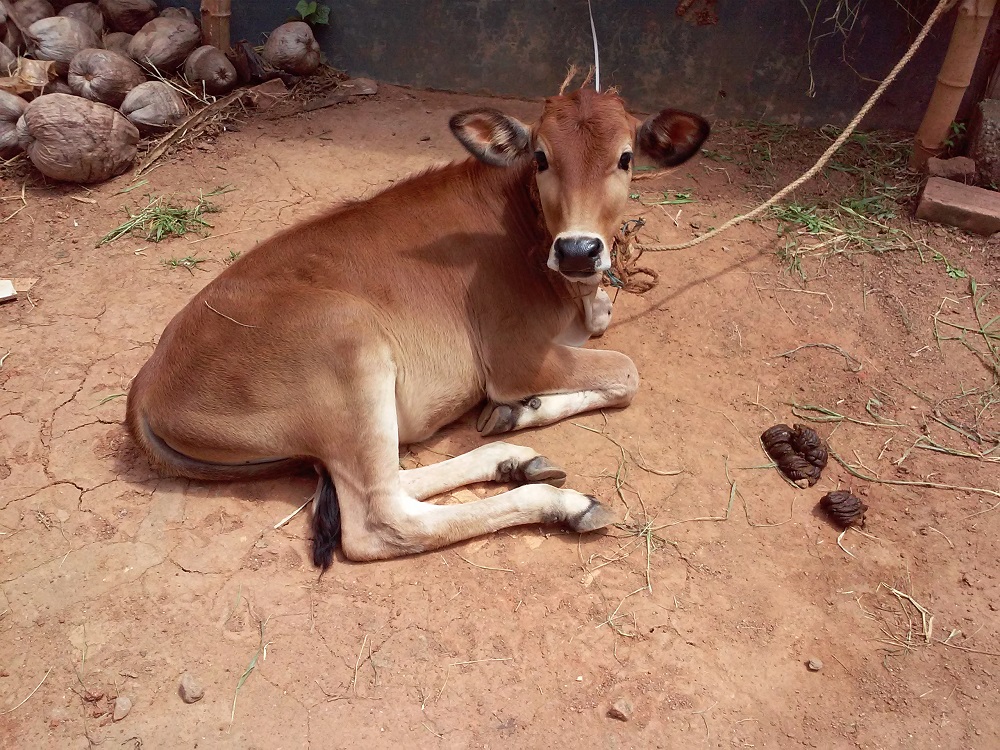 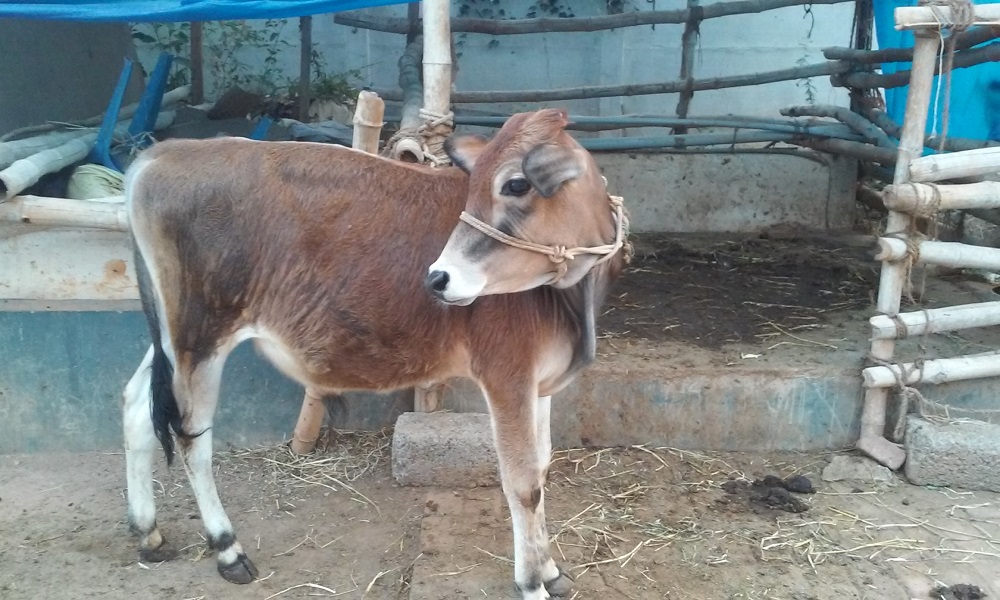 He was sent to an orphanage called Abhayam, they will take care of it. 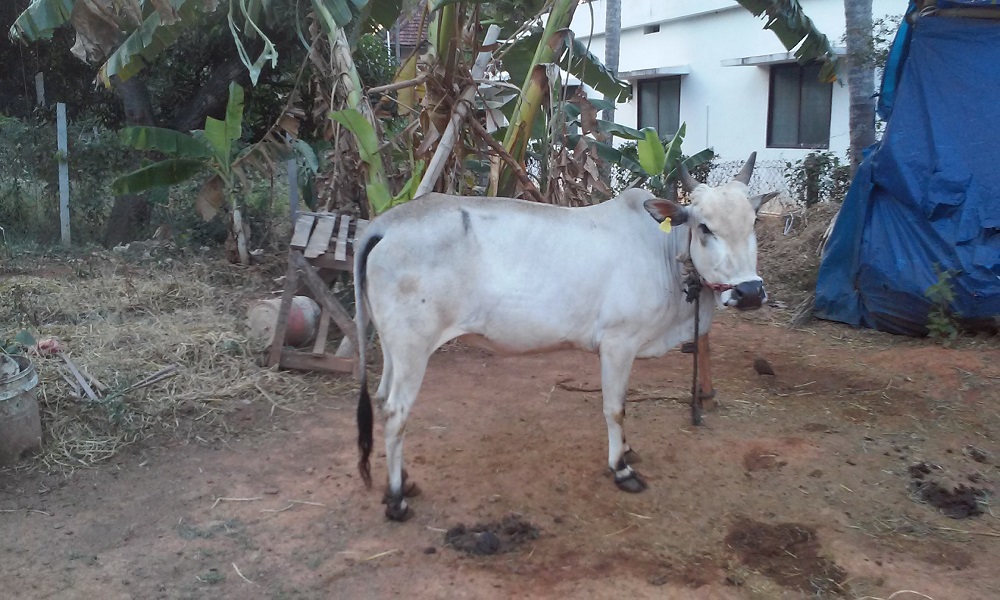 Posted by Nandakumar at 9:28 AM

Thanks for sharing. Good to hear you have your cow under control :) Looking forward to see pics of the cow too sometime soon. Good luck on your farming endeavors.

We learnt to tie our highly energetic 1 month calf (female) to tie a separate rope - neck & front leg tied together until 6 months. Got her nose pierced after that, and that makes a huge difference then...

Our local hill cow (when she came she was only a year old) is much better after her 2nd delivery now. Still we need to tie her legs while milking. She is been with us more than 3 years now. Except milking time, she is good to us :P

Super.. glad to see the naadan cow. i had bought a cow in 2015 july-kasargod dwarf. At that time she was 5 months pregnant, but to our horror, she had a miscarriage after 8 months. We struggled and by luck and with the help of an expert vet we could save the cow. We do not know why this happened. again she was artificially impregnated with vechur semen. By this time she became so affectionate with my mother. Horrifyingly again... she had troubles at delivery. the cervix wouldnt expand. this time the doctor could save the calf, a beautiful male calf with all the features of vechur. This was a month ago. However the vet recommends not to impregnate the cow anymore, unfortunately. We are now milking her, same way you mentioned, we have to put a barricade and tie her legs to escape the kicks.

The quality of milk is splendid. although only 1.5 litres a day the curd made from that milk is tasting so delicious, i recollect those days 30 years ago when we had pure local cows at home.

Highly disappointed the way things turned around in terms of the cow's pregnancy and delivery. It is extremely rare to have such issues with a local breed cow. Anyway if could get another similar cow for a reasonable price i would be glad to buy.

Thanks for the comments..

For the male calf, we haven't pierced the nose yet, but have put a rope between his face and neck, little better after that. Anyway, can not keep the male calf for long, trying to find some one who would take care of him and planning to give him freely.

Subith - Sad to hear the complications with pregrancy of the kasargod dwarf. Now a days, Kasargod dwarf is there in plenty....you should be able to buy one.