Measured this area once again, it is 0.1acre. Preparing the filed for rice cultivation in the monsoon. Wanted to establish a leguminous cover before rice.

After the sesame crops, there are weeds growing in the field. Sown Alfalfa seeds and cut and mulched the weeds using Scythe, after this field was irrigated.

Could see many of the alfalfa seeds germinated and growing, it is quite fast, just in 2 days. 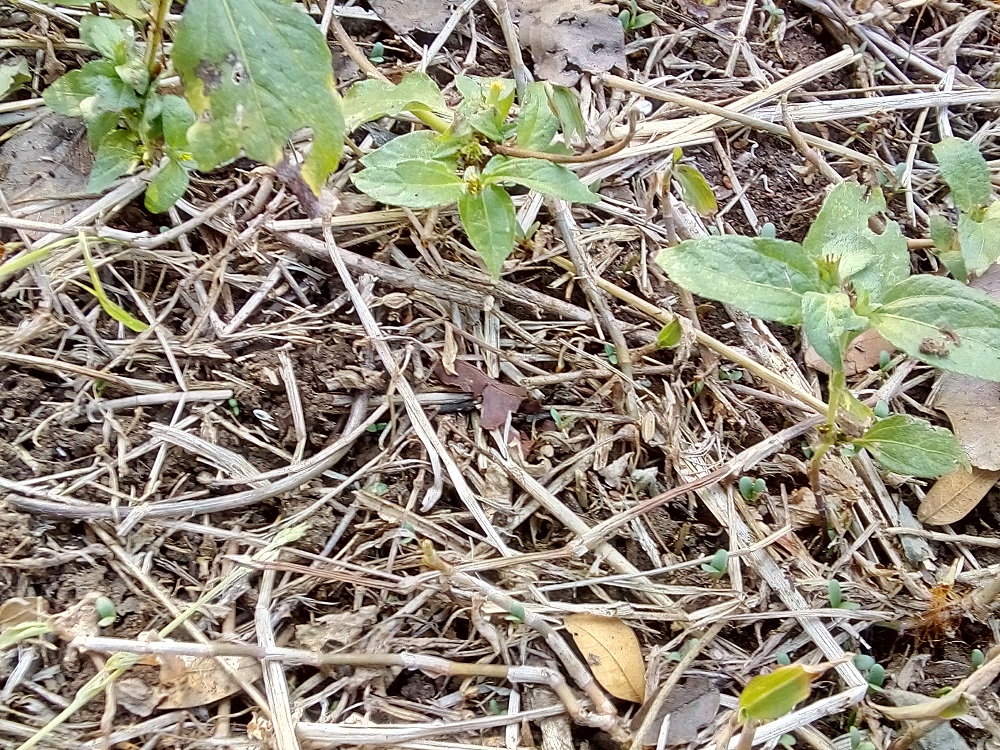 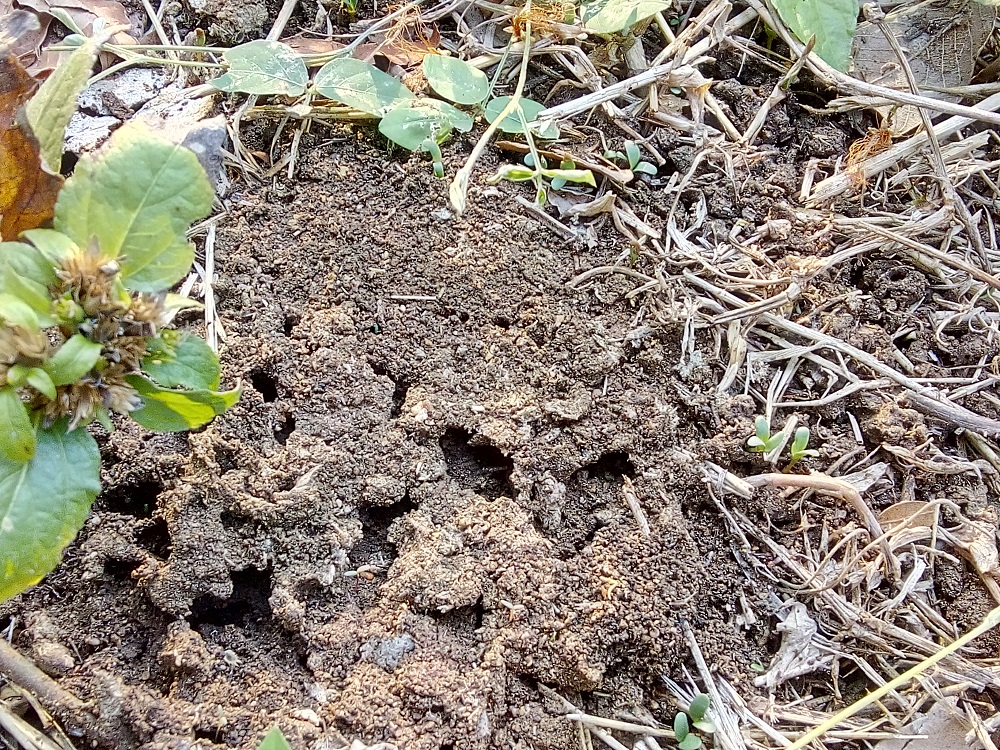 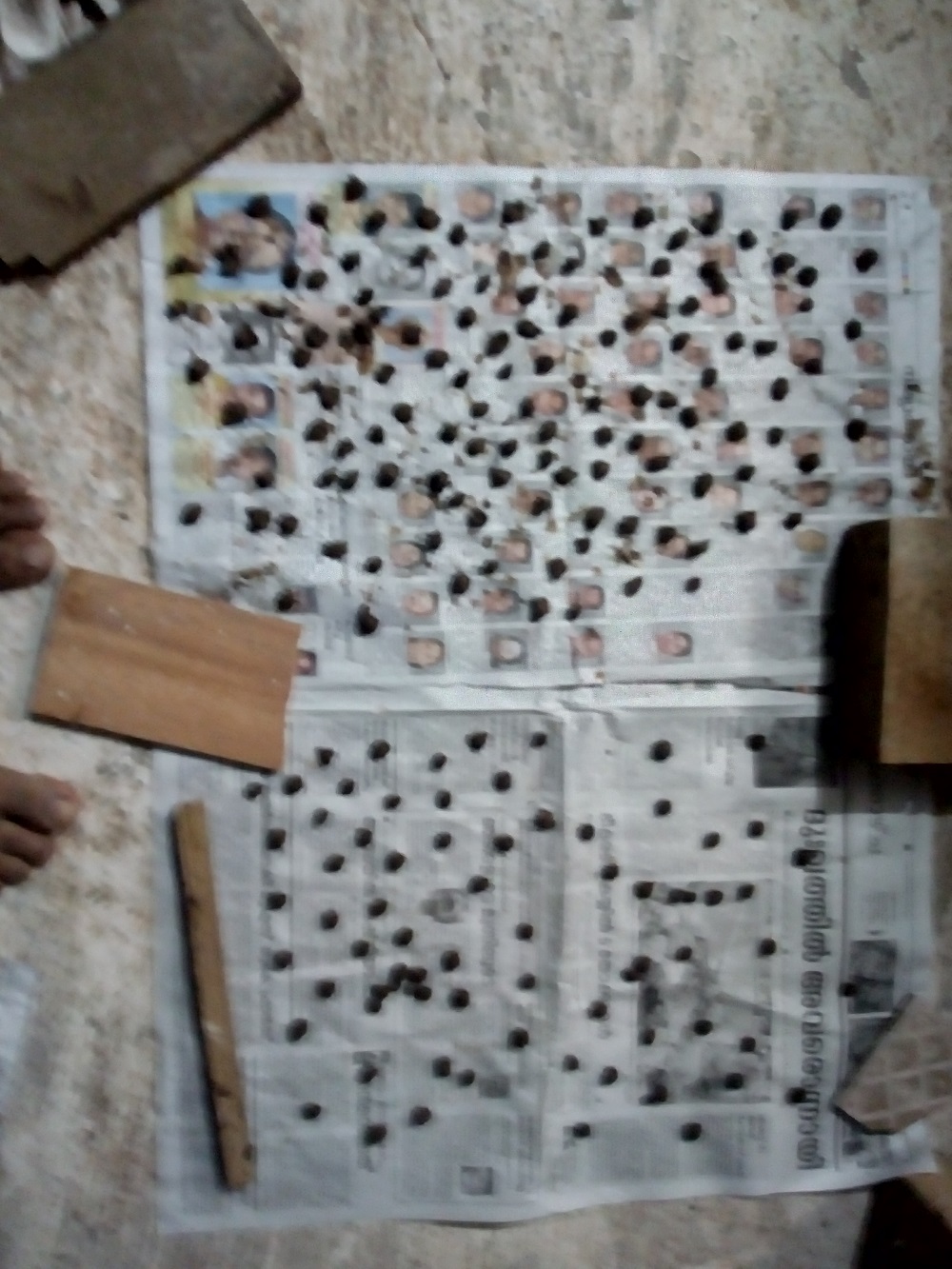 Since alfalfa is not establishing uniformly all around, thought of controlling strong grass with other cover crop, so also putting Desmodium Scorpiurus here and there.Collected some seeds of this and made seed balls. This time used clay soil from paddy field and also mixed cowdung, but the clay soil makes it very hard, after drying. Any way put it and will be irrigating it soon. In places where one particular cover crop does not work, it may be worth trying out multiple cover crops and that also perenials so even if it is not established in single round, after a while a thick stand will be established.

Cut the grass in the entire field using brush cutter, took around 6 hours, done in 2 days. Used string as well as metal blade. But the grass is growing again, may have to cut again and mulch it with mango leaves which is present nearby. If there is strong grass growing,cutting and controlling them is difficult, after cutting them heavy mulching may help.

Meanwhile made seed balls of a traditional variety rice called 'Kuruva'. This time fertilised big seed balls were made on inspiration from 'Kettinatti' of Aji Thomas. Could not follow the method he follows, since the hollow rubber mat, does not give well formed seed pellets. May be some mixing combination.

Total requirement for 1 acre is 64000 seed balls, so 0.1 acre needs 6400 seedballs. Took rice seeds in a bottle cap and it is around 200 numbers, put 3 such caps so totally around 600 seeds, and a small bowl was taken which contains 17 bottle caps. For 3 bottle caps, 10 bowls of soil, compost, coir compost and cowdung was used. Soil,compost and coir compost is well mixed with seeds and then fresh cowdung is added and mixed with water and a solid form is made. This is spread in a platform with around 0.5cm thick and cut into pieces of around 2 cm sizes. May be I can make a small holder to hold this mixture, so that it can be spread at a uniform thickness and then some mechanism to cut into 2 cm size.

A week back field was cut using honda brush cutter, and seed balls were sown and watered it on the same day. The field still has some crab grass and similar strong grasses which grows back even after multiple cutting, but still wanted to try out no-till. Now the only option to control heavy grass seems to be cover crop or tree. 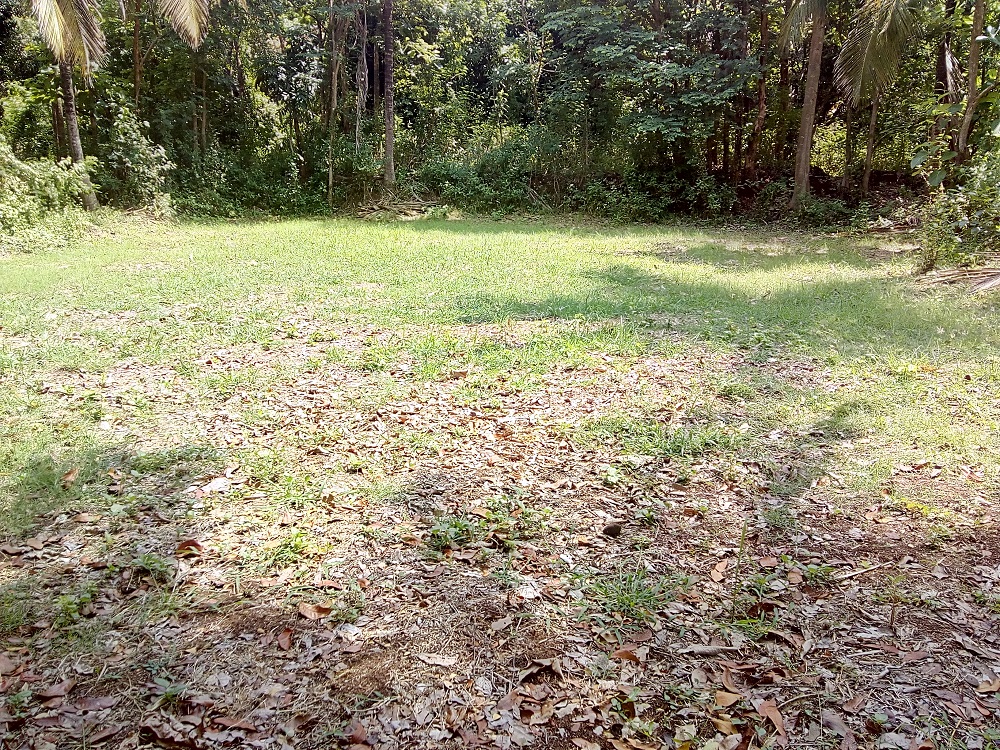 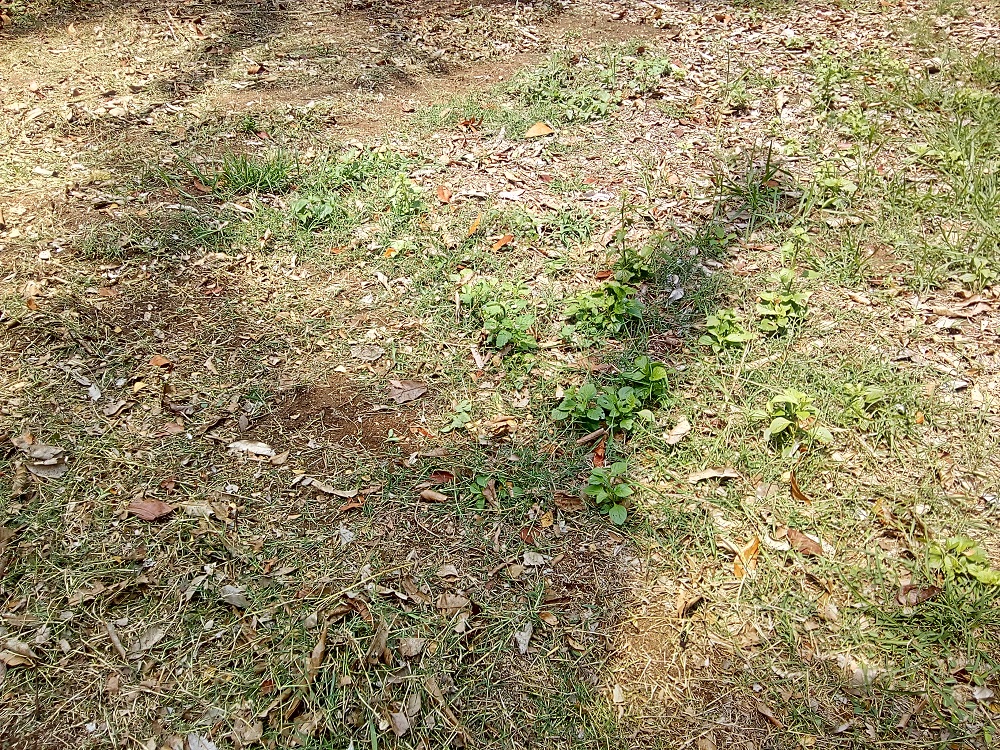 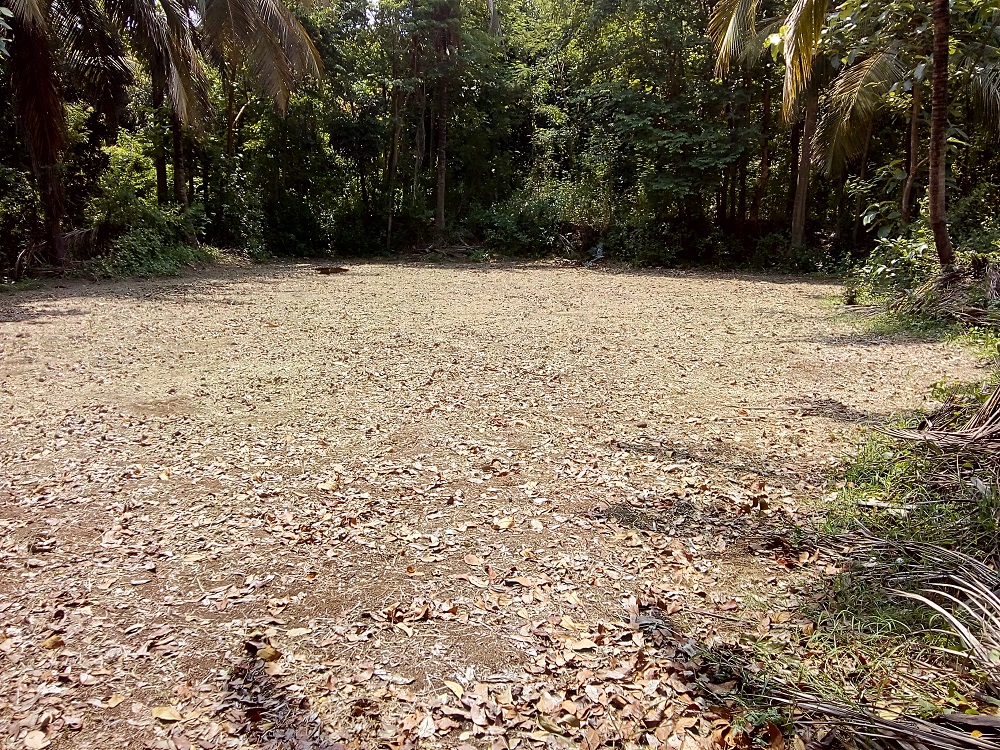 Even though field looks nice after cutting, still there are strong grass which is ready for growing when wet 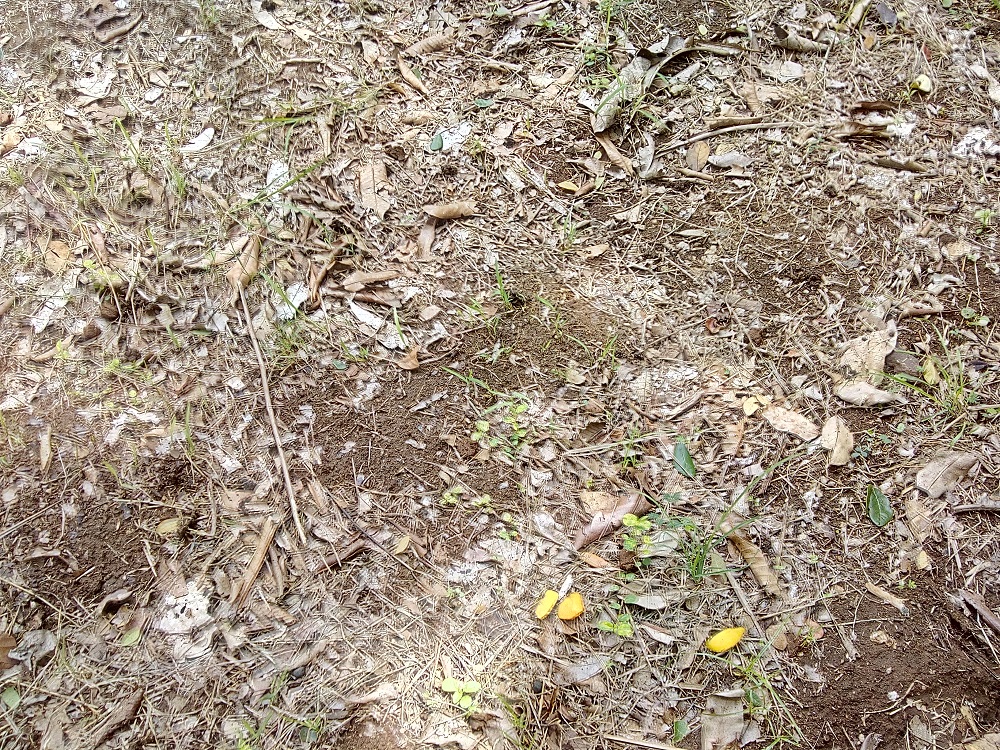 seeds germinating from seedballs. Big fertilised seed balls are good, even after getting wet from rain, seeds are not exposed and not eaten by ants or rodents, so provides maximum protection.

Since in some areas, there are no rice seedlings seen,germinated some seeds and broadcasted them. Seeds were kept in water for 24 hours and then kept in wet cloth and they germinated readily. At times, feels, broadcasting germinated seeds is better, once land is reasonably wet. But have to watch for birds. Conventionally farmers sow germinated seeds while planting nursery. 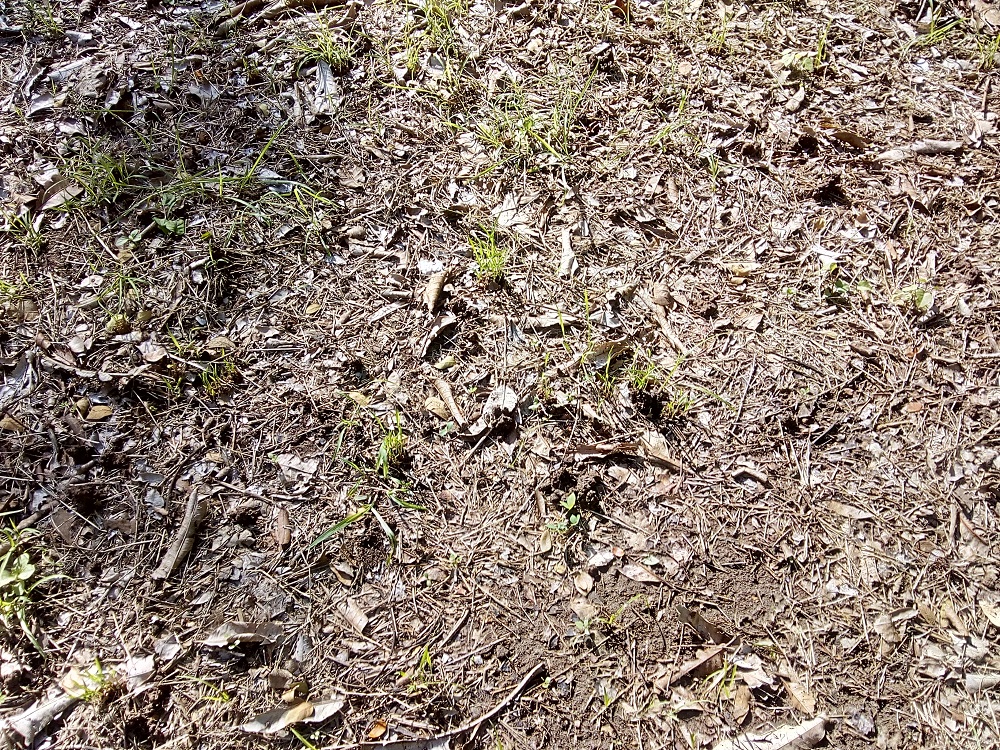 Seedlings coming out from seed balls.

Seedlings germination were not uniform and grasses has taken over. It is always a problem ,by the time seeds germinate and establish, grasses would grow. One solution for this looks to be using pre-germinated seeds, but the land should be wet enough for the roots to take, so either we have to irrigate or sow after a good heavy rain so that moisture remain in the field for a week. 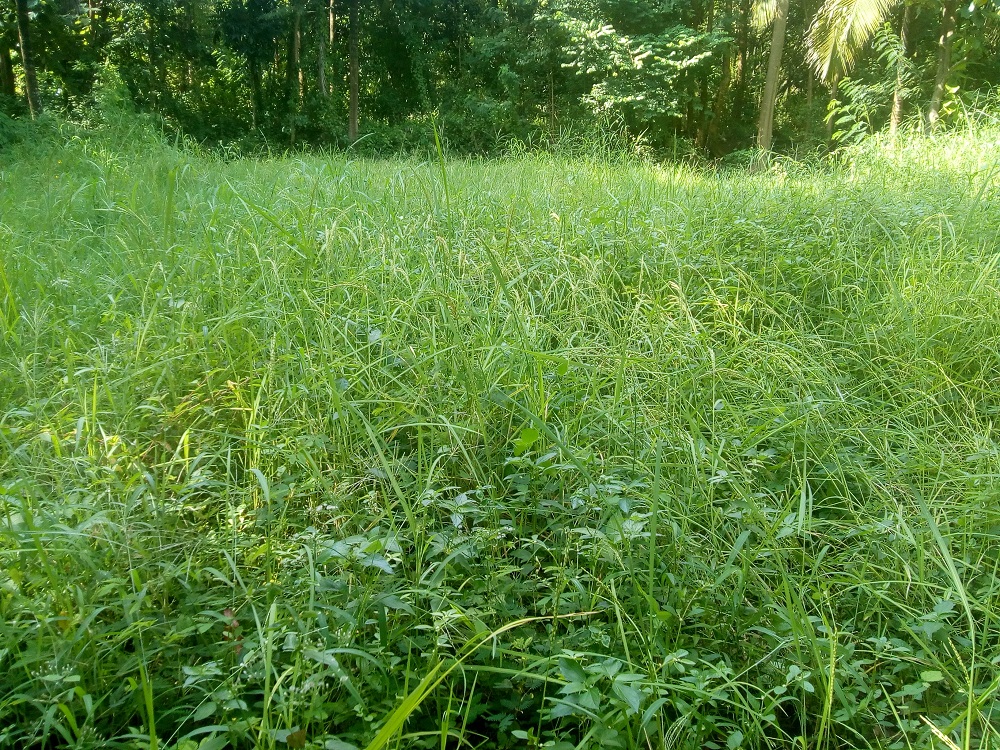 Posted by Nandakumar at 9:36 PM