I have been hearing about Hugelkulture, recently I constructed couple of beds by burying wood, husk and wood clips, yet to be seen its effectiveness. According to sources, if it is built properly with enough wood logs, then no need of watering. Some information compiled from internet.

Hugelkultur” is a German word and means hill culture. It’s an ancient practice of creating raised garden beds by covering wood with soil. Hugelkultur has been practiced by permaculture practioner Sepp Holzer for many years.Masanobu Fukuoka also talks about burying wood to increase fertility
while establishing orchard.

Hugelkultur has been practiced in Europe for a long time and it is considered to be a very sustainable method of gardening. The buried wood acts like a sponge capturing water and produces lots of nutrients. As it decomposes, the wood draws in beneficial fungi and quickly turns into rich soil. As a result of this decomposition it creates the most amazing,fertile, and self-hydrating raised beds.

A hugelkultur bed imitates a forest floor.When trees and branches fall to the floor of a forest, they act like a sponge as they decay. By covering wood with sod, soil, and/or compost, you create a moist environment perfect for fungi to colonize. It’s a permanent bed and gets better with age.

Simply mound logs, branches, leaves, grass clippings, straw, cardboard, petroleum-free newspaper, manure, compost or whatever other biomass you have available, top with soil and plant your veggies. Some sources says they only have to water established beds a couple times per summer. Soil aeration increases as those branches  and logs break down... meaning the bed will be no till, long term.

The logs and branches act like a sponge. Rainwater is stored and then released during drier times. Actually you may never need to water your hugel bed again after the first year (except during long term droughts).

Building a hugelkultur bed can be as simple or as involved as you want. You can make small, 60cm mounds of rotting wood right on the ground. Place the wood like a puzzle, allowing as few gaps as possible. Add grass clippings and other finer nitrogen-rich organic matter to fill the gaps left
between the logs. Lastly cover the whole heap with 5cm of top soil and plant on and around it.

A 60cm tall,above ground, hugelkultur bed can maintain a usable level of moisture for about 3 weeks after it is saturated. Larger beds of 1.8m can hold enough  water for an entire growing season.

Some photos of my beds... 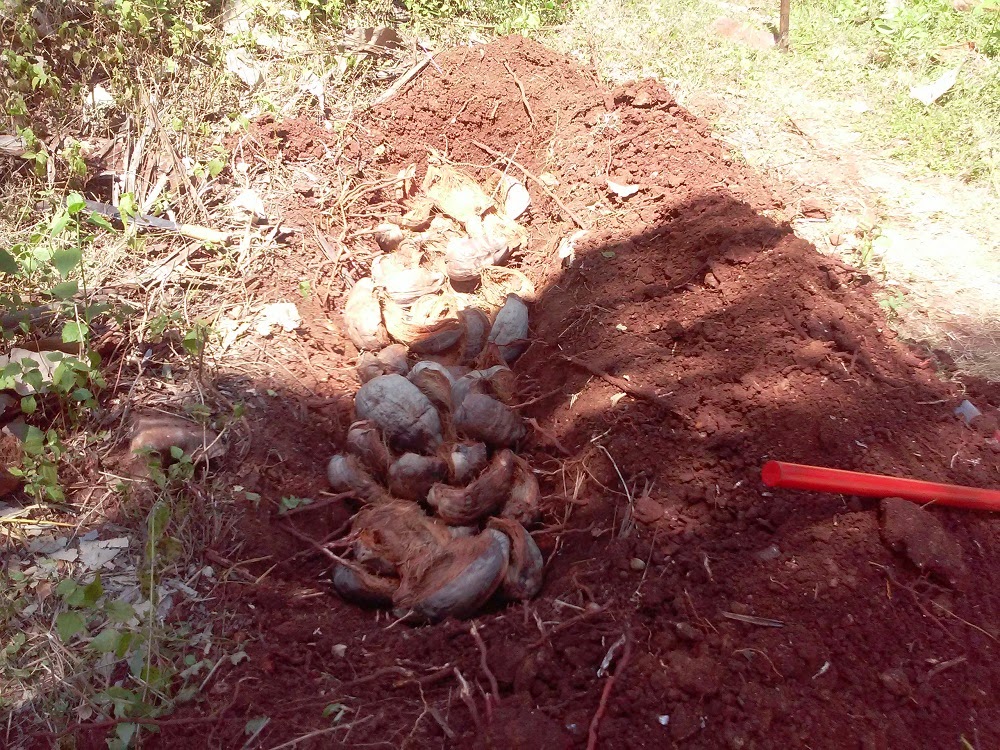 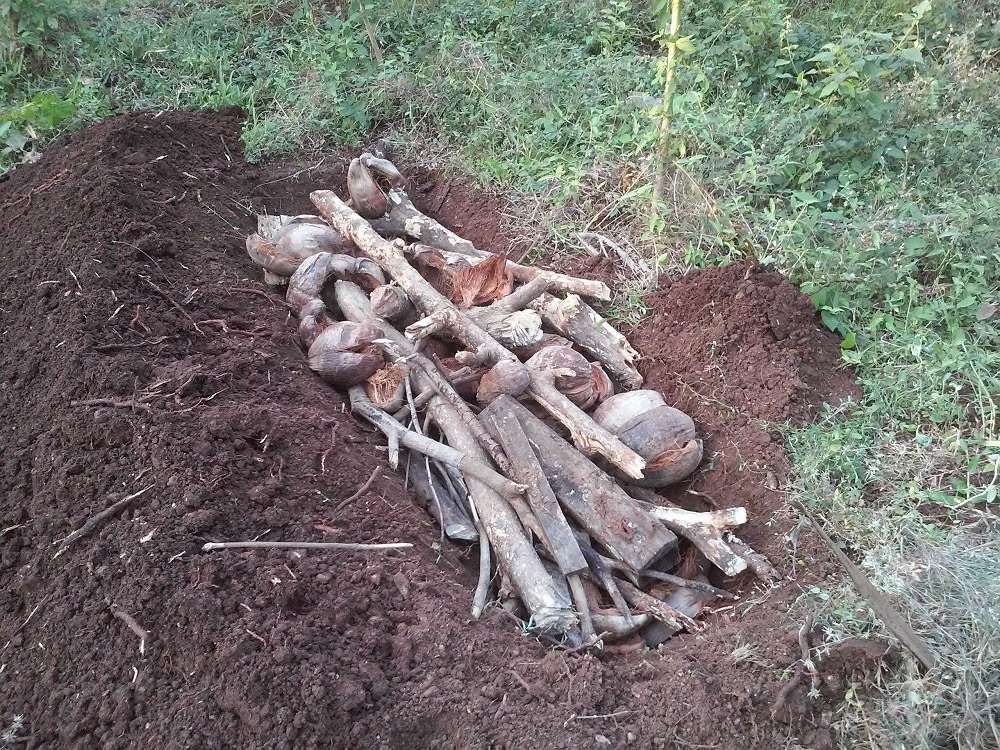 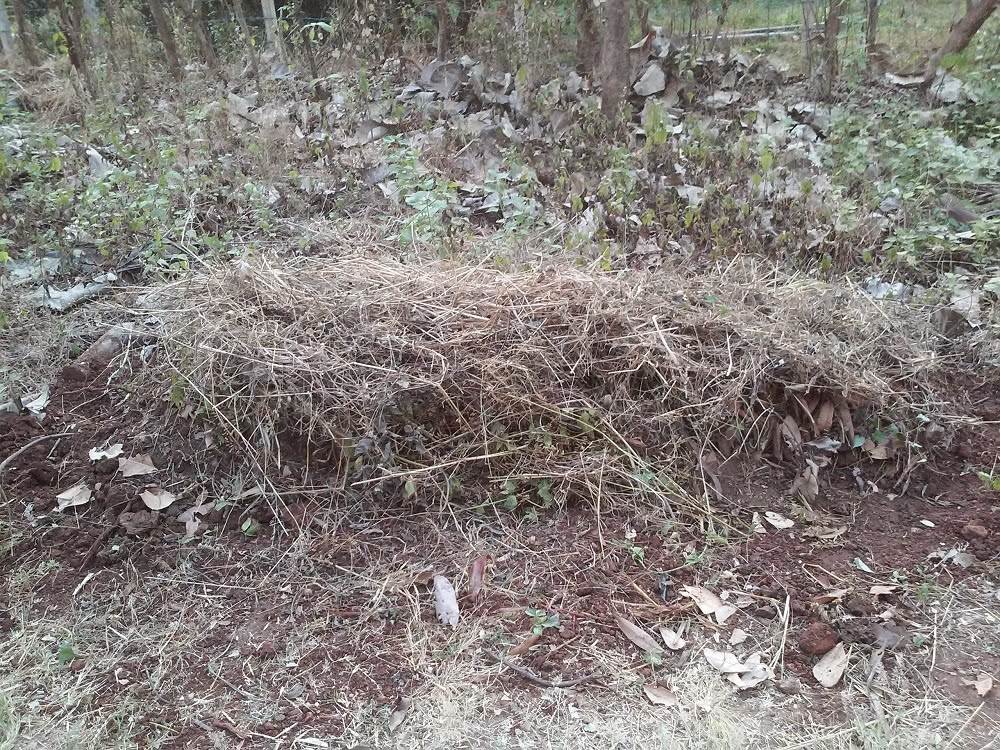 Lady's finger on Hugelkulture bed, with watering on weekly once/twice. 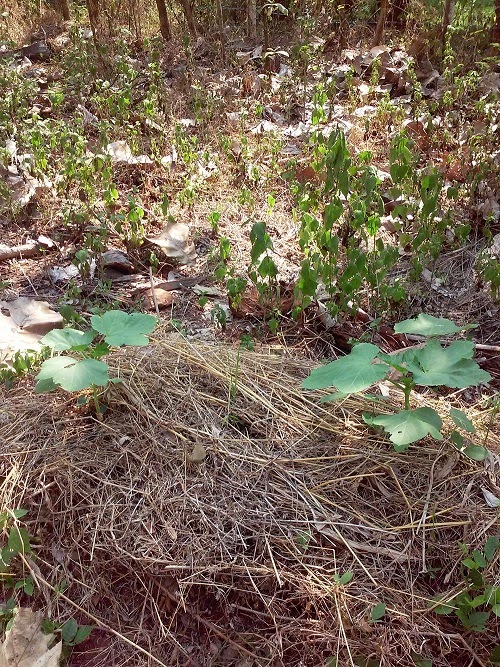 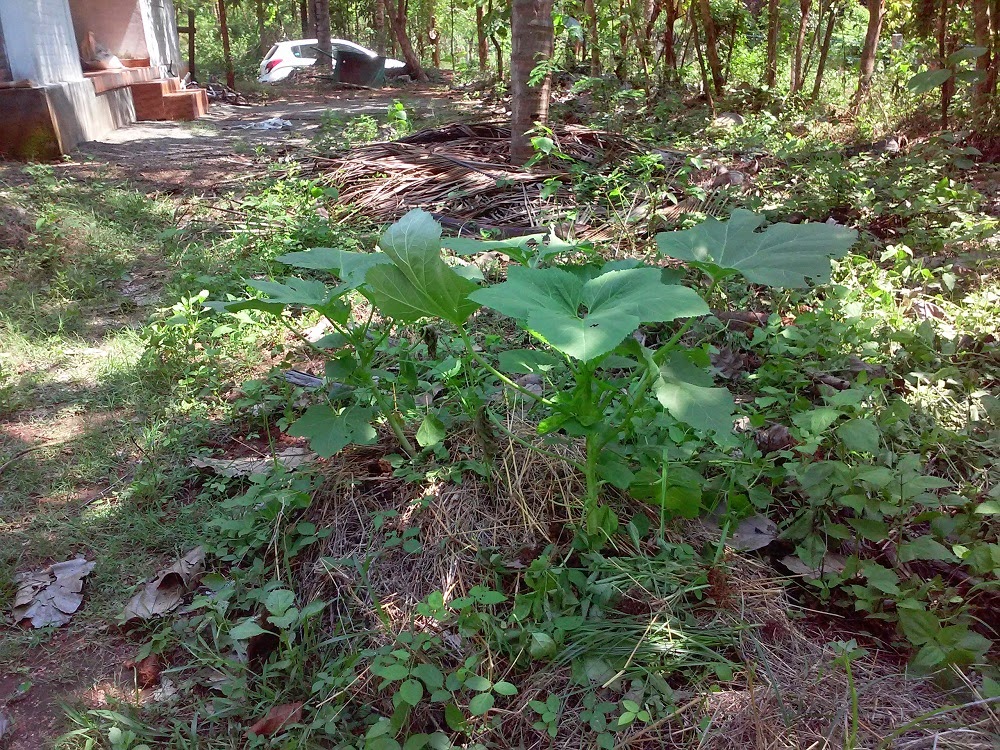 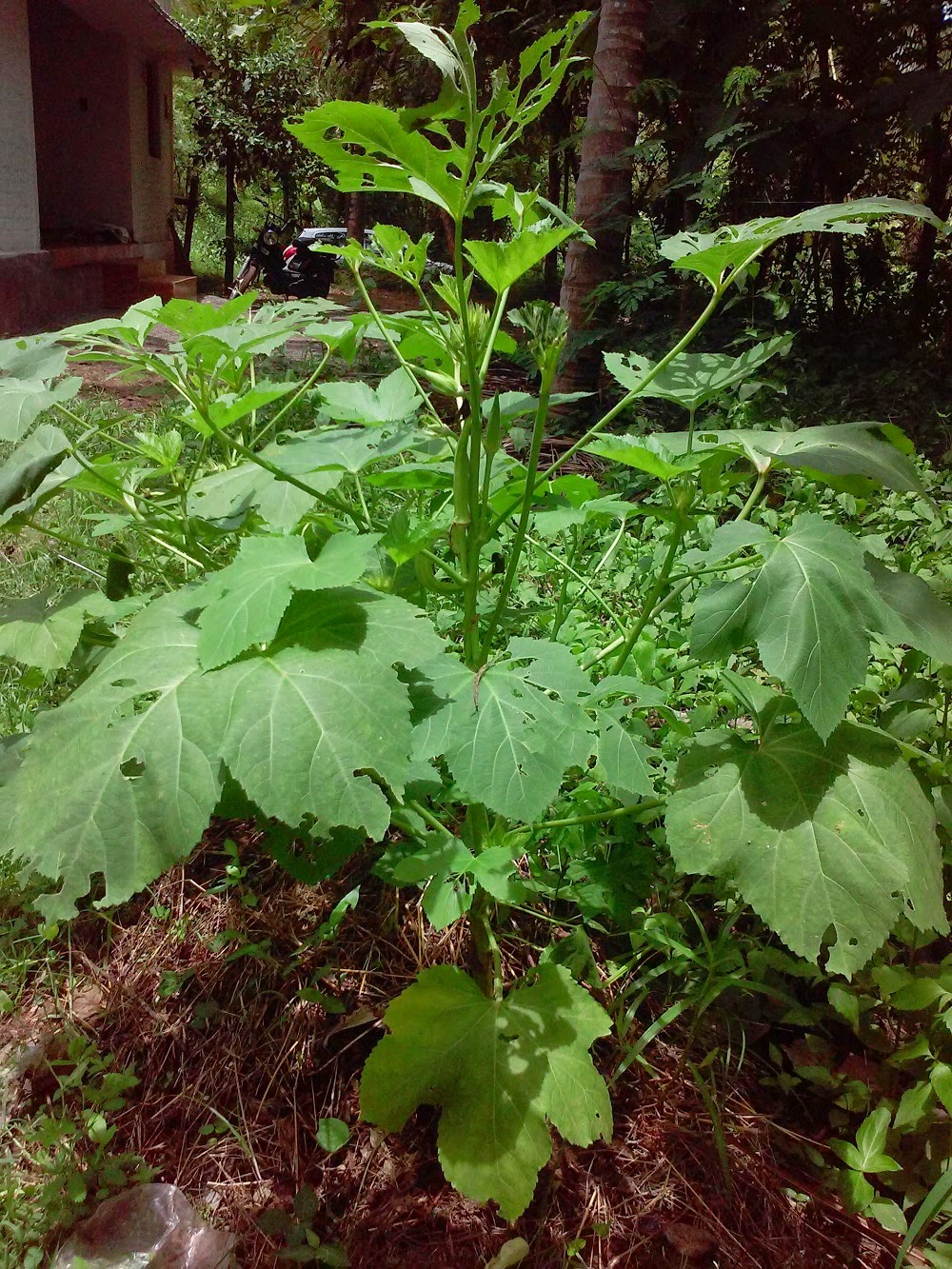 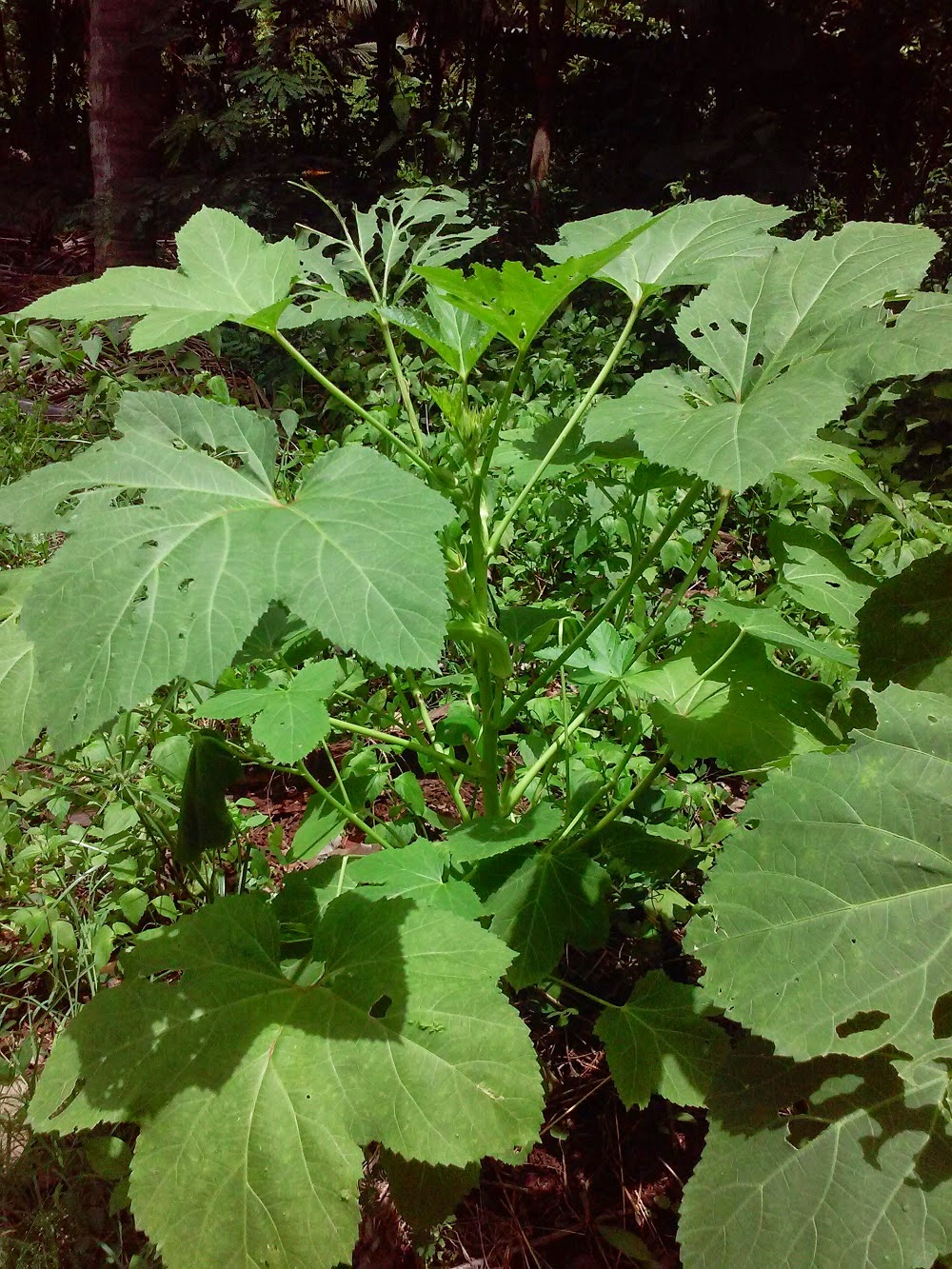 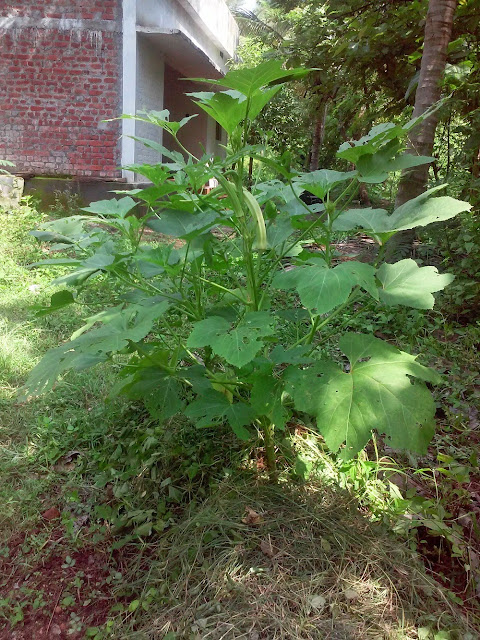 After the rain there is lot of grass growing, cut and mulched..it is easier work in farming. After that place also looks neat...

Lady's finger plants started yielding..this is very tasty traditional variety called 'Anakomban' in malayalam, meaning elephant tusks, fully grown vegetable looks like that.Thanks to Gopu Kodungallur who gave these seeds. The leaves are eaten by some insects, didn't do anything for that, plants are yielding and looks healthy and they will take care.

Some more beds are getting ready... 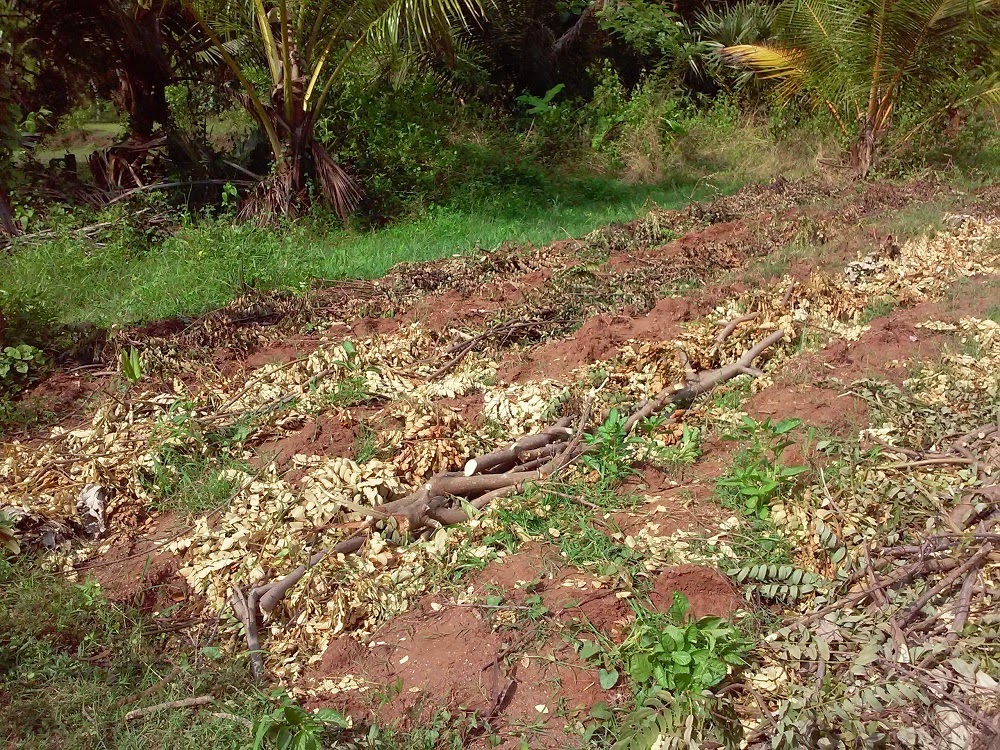 Workers kept trunks/leaves very loose, so need some rework to pack them. 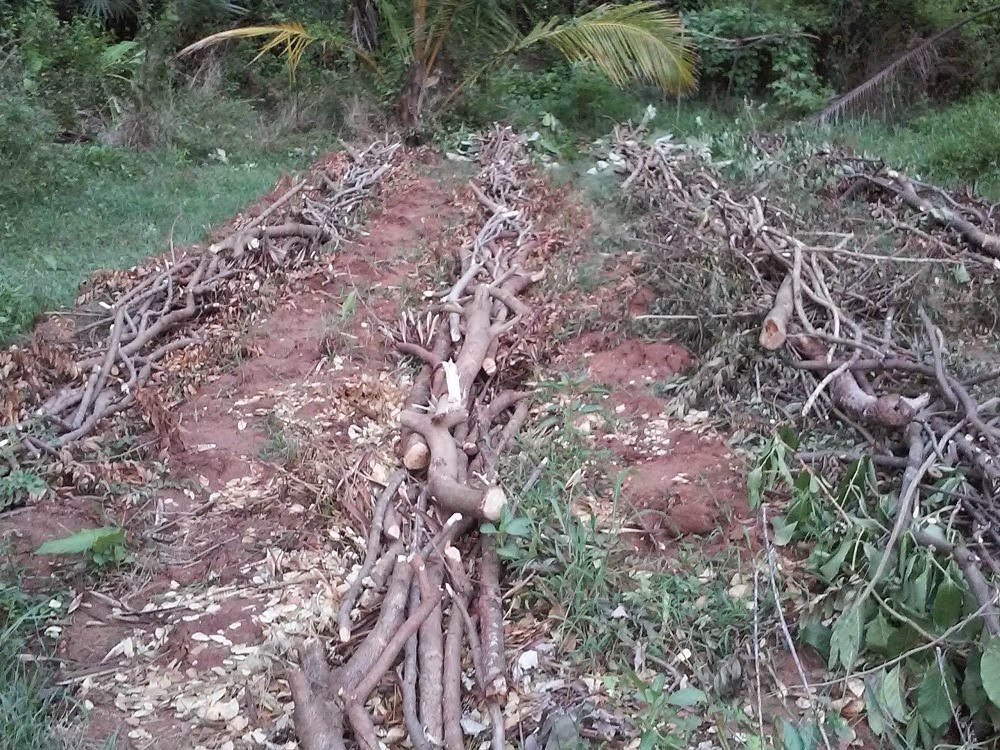 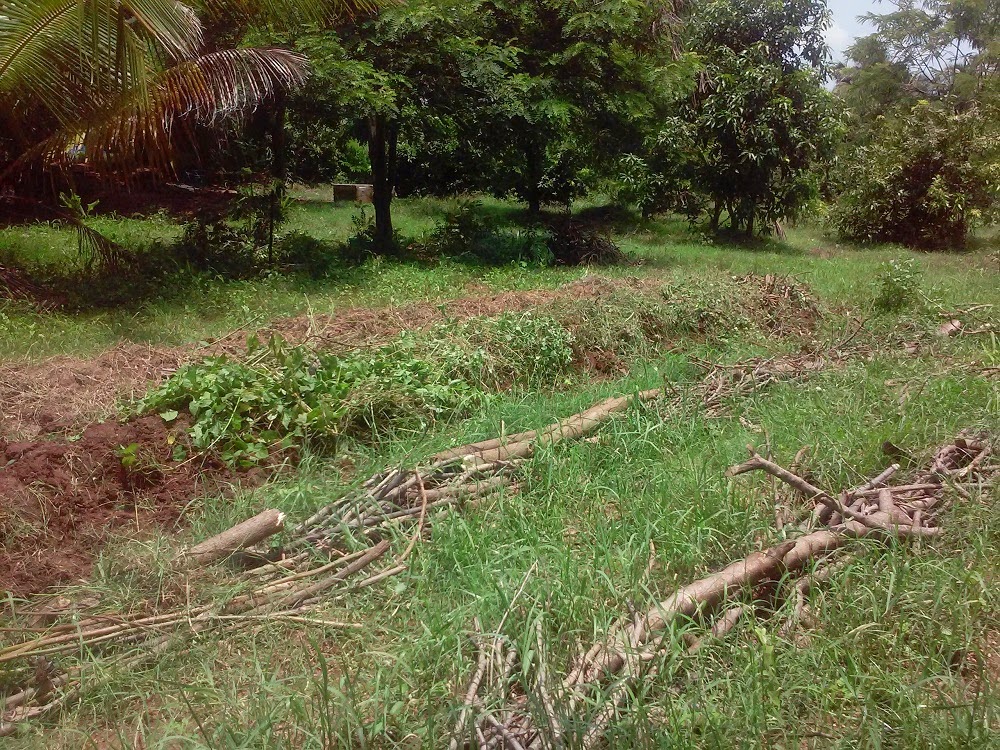 Two more beds are completed..for this I had dug 0.75 feet under the ground and put logs..and piled logs around 0.75 feet above ground. But while putting soil from both side, it looked to me the soil is not sufficient. The total height of the bed comes around 1.5 feet above ground. When the height of the bed increases, it takes a conical shape and covering the sides is difficult. Thinking best way is to dig more, probably around 2 feet and fill it with logs and then cover it so that just bed height from ground is just 0.75 feet.

Lady's finger on beds..no rain for close to a month, still they are surviving and producing some vegetables...have to establish all the beds fully now..watering may be required, initially was thinking about sprinkler or drip, later Jacob sir on last visit suggested to irrigate between beds, thought that will be more practical. 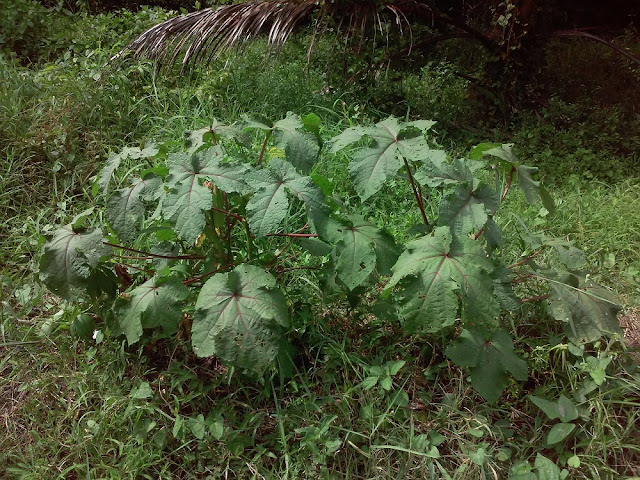 This lady's finger is growing well...even though kept a tank ready for watering, but not used so far.. 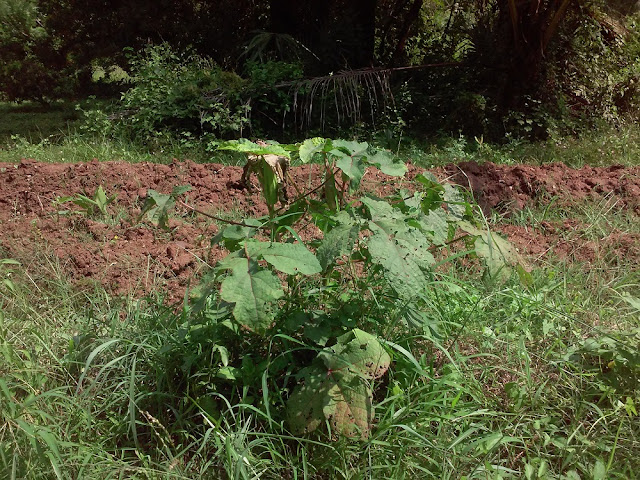 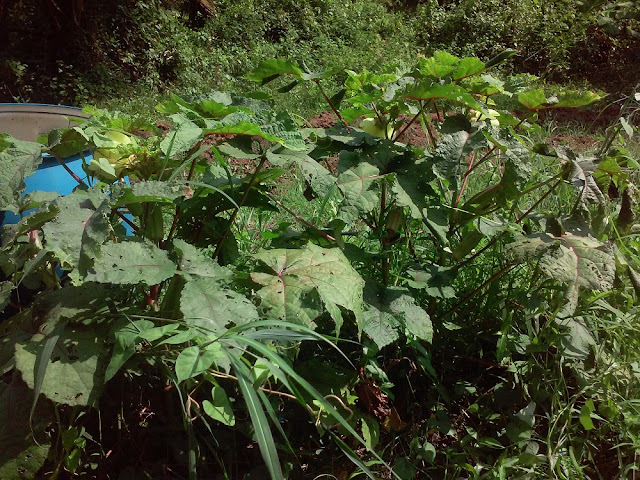 After the lady's finger a few tapioca cuttings were planted and harvested. When it is left fallow, grass takes over and also mud was moving to sides since there was not enough mulch. Just cut the grass and piling up some more soil and planning to mulch again. In one bed, lady's finger seeds were put. This time rain is very poor, but in southern parts of  Kerala it is raining well. 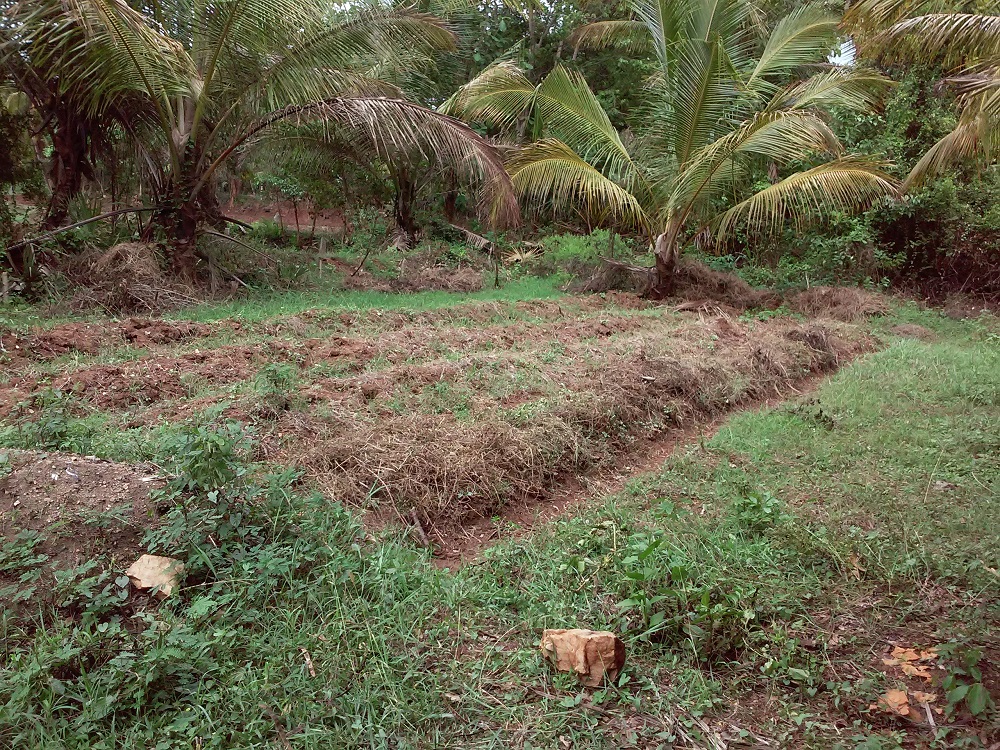 Posted by Nandakumar at 1:47 AM

How did your later experiments with the Happy Hill rice of Masanobu Fukuoka go?

Those paddy seeds are not germinating..I kept them for an year without cultivating..had distributed it to couple of people, have to ping them and check, if they have the seeds. I had given it to Dr.Debal Deb, who preserves many rice varieties, at least he should be still having it.

Did you create Hugel bed and planted seeds immediately?
I understand it absorbs nitrogen from soil while degrading and second year onwards they supply nutrients.
To avoid this they spread coffee grind on wood to supply nitrogen. Did you use any compost while covering the soil? Keep posting I am very curious.

I put some dried cowdung on top of the bed, mulched it and planted immediately. On another bed, growth of lady's finger is not so great, but it is a different variety and sunlight is partial on that place, there may be different factors affecting the growth.

Nanda, appreciate your patience for trying new things. Do make record of what works for you and hope you can share these techniques with fellow farmers or make a case study for future reference. You can also start a local seed bank. God bless you.

Thank you very much Raj, will update the progress. Yes, I would like to share the seeds with others, will think about the seed bank.