Even though only few mango trees flowered this time, one moovandan mango tree have enough fruits. When fruits started falling, harvested few and used at home. Today harvested remaining ones. It was around 200Kgs, so where to sell was a big question. While my farm help, Palani was harvesting, I made few calls and some suggested, it should be brought in trays which I was not having. To collect trays first I have to go there and then it has to be packed in tray and again taken to the shop.

Later I decided that, I will just take it in the car and will see what happens. I took it to a place called 'Kamrathchalla'. They confirmed mango is of good quality and matured enough and offered 25/ per kg which was less, so went to the next shop which had ample parking space. They also told it is good quality and offered 35/ per kg. This shop's name is P.K.Haneefa,Pallam,Muthalamada (it is on the way to Kambrathchalla). They graded it and good ones were 153 Kgs and 3nd quality was 30Kgs, totally earned 5955/ good money considering a single tree. 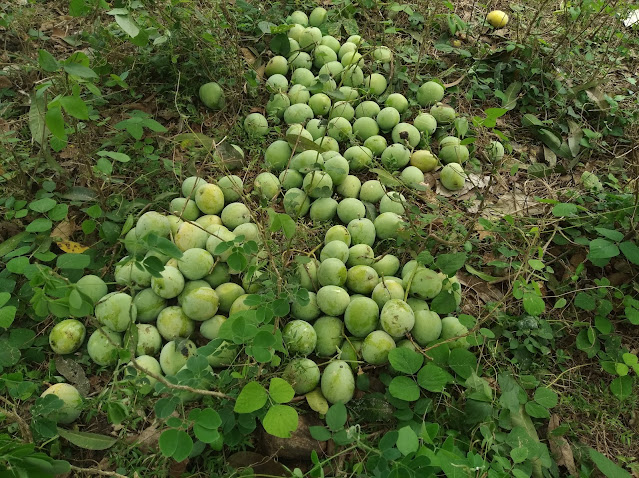 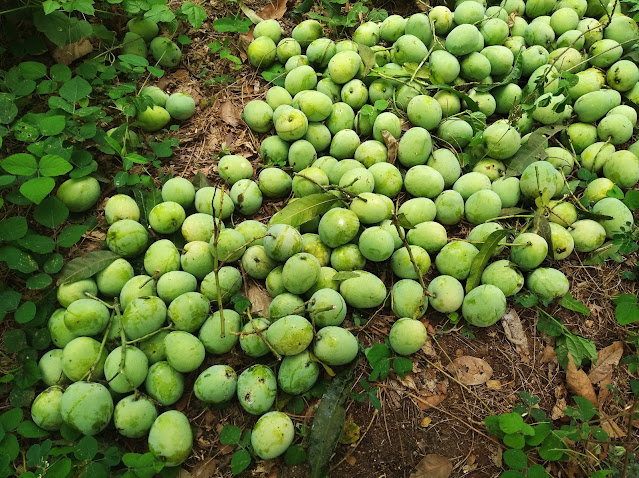 Posted by Nandakumar at 7:01 AM No comments:

My existing scythe handle was locally made, it was working nice, but after the snath saver had gone bad, handle started breaking when the blade hits a hard object. Ordered a new wooden handle with mini-cradle from Vikalp, costed 1800/- totally and they shipped it promptly and it arrived without any issues. 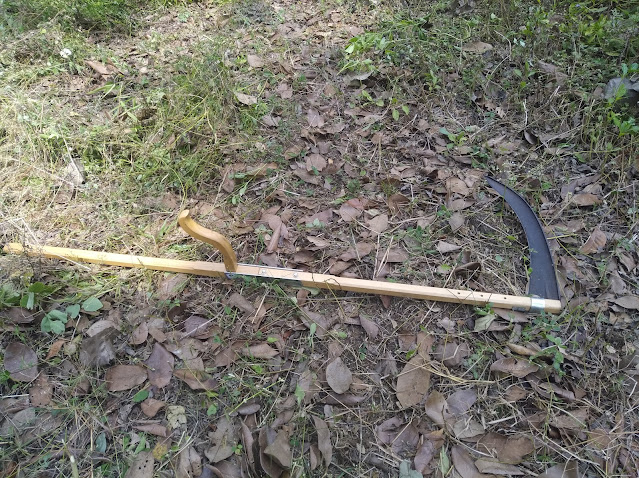 Cutting is much easier now...grip is quite good and makes cutting much easier
Posted by Nandakumar at 9:43 AM No comments:

I have been hearing that Attapadi tribal people cultivates upland rice in hills just based on rain water. Few years back a friend had given few seeds, saying it is 'arie nell' from Attapadi and it tillers heavily, but those seeds didn't germinate.

During an agriculture online meet one x-navy person who is a farmer now, brought out that they cultivate upland rice, this retriggered my curiosity. Called him and he promised to give some rice seeds. Since depending on a single contact to get these seeds is bit risky since when you are going there, they may not be there or some such situations can arise. Contacted one more friend called Kunju chettan who was in Attapadi and he gave another agriculture officer Ambu's phone number and this office was very prompt and he gave Doraisswamy's contact. He used to pick up phone every time and he promised to give 1 kg of seed.

Another friend whose contact number I had collected from internet, also promised to give some seeds. So myself and another friend Paulettan started the Attapadi journey. I travelled to Mannarkkad by bus from there we started on Paulettan's bike, it was nice to see around while travelling in bike. We collected some cashew nuts seeds also on the way.

Two contacts gave the seeds while one person was not reachable on the phone. Doraiswamy didn't take money for the seeds, even though we compelled him. To my surprise both seeds were different...One given by Doraiswamy was slightly blackish in color and it was 4 months duration, and they started cultivating this between June and July after there is good rain. Unlike in the olden days, where they start the rice with first rain, they wait for rain to establish then sow the seeds. With good rain, soil will be more fertile and also for 2 months, it will receive good water and will grow without any problem.

The other seed was of 6 months duration, and still it is started in June after getting good rain. 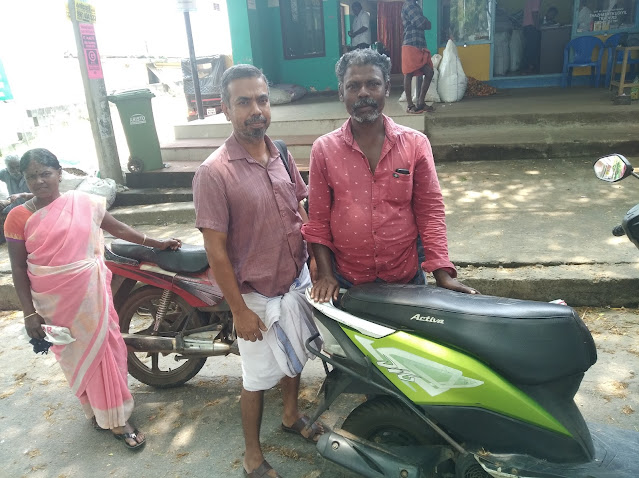 Doraiswamy and his wife with me 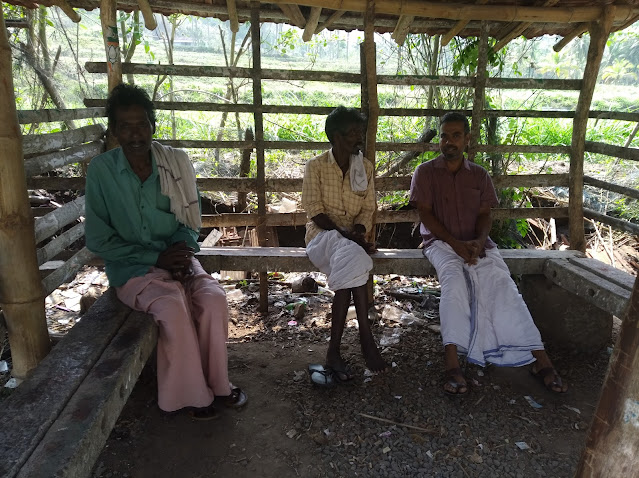 Met two persons..Rangan and Konan...they were saying people lost interest in agriculture after government started supplying rice through ration shops. Also to our surprise they could identify the seeds which is 6 months and which is 4 months 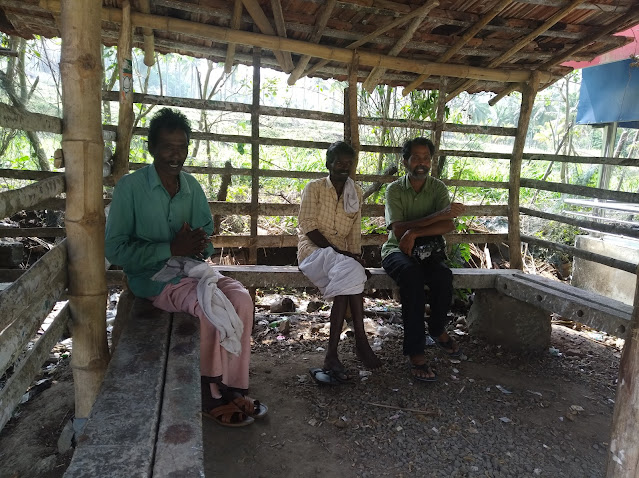 Posted by Nandakumar at 9:37 AM No comments:

I have many mango varieties in the farm, but most of them does not yield regularly. I have Baganapilly, Salem (Locally called Kilimookk),Gudadath, Jeeri, Sindooram,Neelam,Chandrakkaran,Kolumbu etc...Lots of mango varieties yield on alternate years and also since trees are pruned from the beginning and I haven't pruned them after and they yield much less. But I could see that one variety called Kolumbu yield every year and there are no worms in this variety after ripening. While varietis like Baganapilly and Salem is infected with worms. Since I don't use any pesticide or any chemicals, yield and income from mangoes is much less.
This year started research on local varieties which yield good, Kolombu was the role model. This mango is very tasty and has good demand in organic shops. I came across a facebook group called 'Nadan Mavukal' (നാടൻ മാവുകൾ ) and could see there are many local varieties being discussed here, talked to S.T.Ravi administrator of this group and could get some interesting local varieties.
Here are some local varieties which yield every year, tasty, no worm infestations and polyembryonic (saplings grown from seeds shows similar properties of parent tree)
1. Kolombu (കൊളമ്പ്)
A variety from Sreelanka, lots of people from Kerala used to work in Sreelanka in olden days and they call the place as 'Kolombu' . Also internet searches reveal that this mango exists as 'Vella Kolomban' in Sreelanka, there is another variety 'Karutha Kolomban' and this is also supposed to be very tasty and is found in Gulf super markets. This is seen mostly in Trichur and Ernakulam districts in Kerala and is spreading fast to other areas.
This is extremely tasty variety and no insects attack even when it is ripe on trees and bears fruit in every year. Seed is polyembrionic.
Nadan-mavukal-kolombu
2. Kuttiattor (കുറ്റ്യാട്ടോർ)
This variety is famous in Kannur and there is a place called 'Kuttiattor' where this is found in plenty, it is  also called as 'Nambiar Mango'. This has received GI (Geographical Indication) tag. This is also a very tasty variety ,less insect attack and seed is poly embrionic.
https://www.youtube.com/watch?v=jHQoyWId4RI
3. Chelan (ചേലൻ)
This variety is famous in Calicut area and is a tasty variety
https://www.facebook.com/groups/326549171395987/permalink/777807759603457/
4. Thrissurkkaran (തൃശ്ശൂർക്കാരൻ)
This is a variety found in Trichur and is named by the Facebook group
https://www.facebook.com/groups/326549171395987/posts/802513390466227
5. Ponnus (പൊന്നൂസ്)
6. Kunjus (കുഞ്ഞൂസ്)
7. Kannan (കണ്ണൻ)
8. Chenkulayan Madhuram (ചെങ്കുലയൻ മധുരം)
9. Neela Moovandan (Kurukkan Mavu)
10. Komavu (Vattamavu)
11. Avokkaran (അവോക്കാരൻ )
12. Alikutty (ആലിക്കുട്ടി )
13. Cheriya Kilichundan (ചെറിയ കിളിച്ചുണ്ടൻ )
14. Tholikaippan(തൊലികയ്പ്പൻ )
15. Aarya (ആര്യ)
16. Chuvanna Moovandan (ചുവന്ന മൂവാണ്ടൻ )
17. Sarkkar (സർക്കാർ മാമ്പഴം)
Posted by Nandakumar at 12:05 AM No comments:

Saving Ginger/Taro for next season

Ginger is harvested in February and next crop will be put in June/July after rain starts. Till this time seed has to be saved, last time kept harvested ginger in rubber basket with soil, but all were spoiled by the time it had to be planted.

This time, wanted to keep in a pit made in the soil, and covered with soil and also in between it can be kept moist by watering slightly. 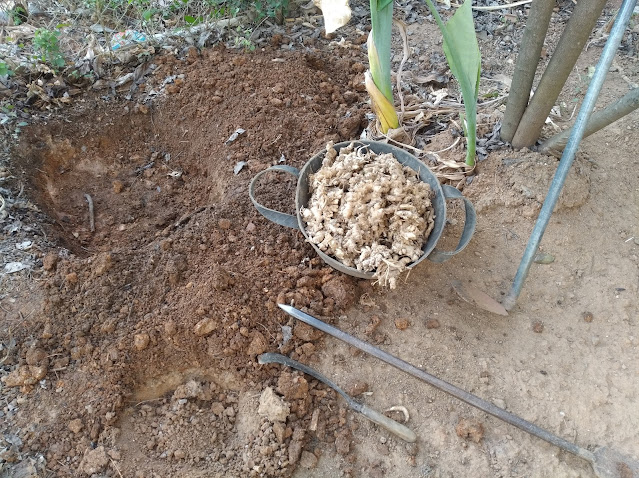 Posted by Nandakumar at 1:31 AM No comments:

Harvested turmeric which was planted in the last rainy season. In some areas where there was good gap between plants ,weeded and piled soil around the base of plants, those areas yield was good. At the time of harvesting, put some seeds back at those places since that reduces work drastically. This is Fukuoka San's idea of root vegetable cultivation. Also mulched these area's well. 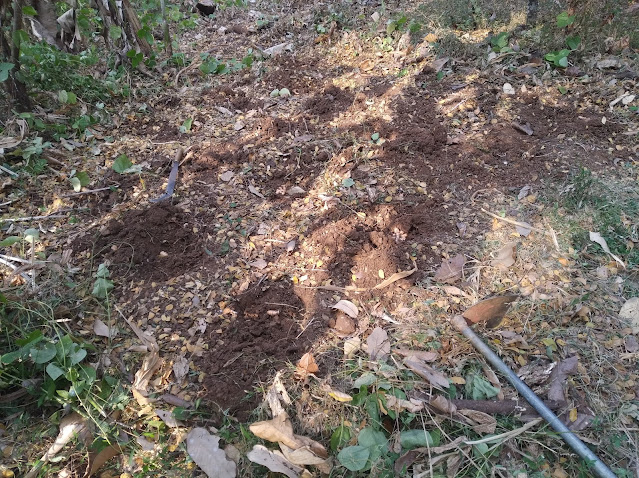 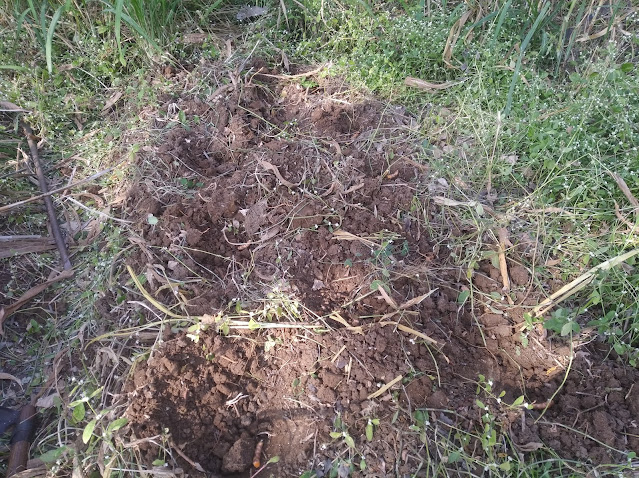 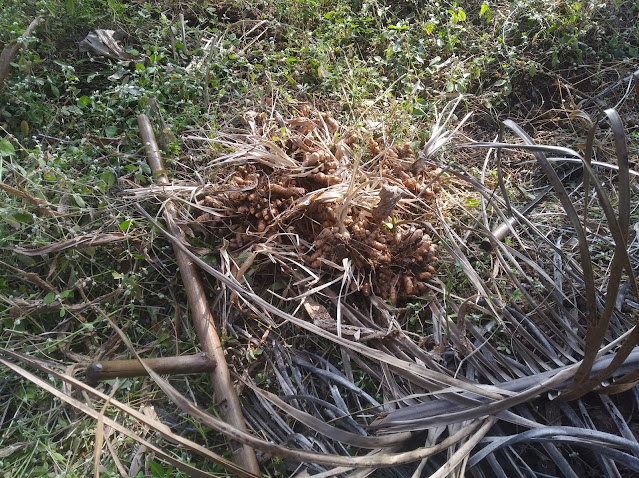 Posted by Nandakumar at 1:26 AM No comments:

Another abandoned dog to home

This is a bit delayed post...It has been more than 6 months since we have a new dog at home...

Opposite to our farm, a new person came as caretaker with a female dog, a cute dog, he called her 'Pennu'.She was initially a bit hostile to me, but as usual gave her couple of biscuits and she became very close friend. The new caretaker was a bit away from Palakkad and he was doing such jobs in Palakkad since he was badly in need of money. In his previous job, he got this dog and since no one wanted her since it was a female dog, he took her with him.

She was tied at the farm and only at night she was released for some time and Pennu would warm him of wild boars and snakes well. One day when I went there, he was not there and Pennu was tied to a pillar and neighbor lady told that he had asked her to take care of the dog and he would come back after some time and would take her. Neighbor lady used to give her food at the afternoon and in the evening. Whenever I went there, I also fed her. She used to spend whole day there all alone....

He kept on pushing his date of coming back and finally he told, to give the dog to some one. Neighbor lady also was tired of feeding her and was planning to release her. I told this story at home and showed her photo and family was OK to take her. When we visited next time, my daughter's friend Aagy also was there, she named her as Pinky. We quickly made a cage for her and brought her home, she was calm in the car and got adjusted well.

She is very cute and is very much afraid when we take a stick or shout at her. It looks like previous owner used to hit her. She doesn't enter inside house, obeys commands like sit and bring ball back, if biscuits are there in hand. Also if asked she will get into the cage on command. She is not befriended with other dog and once there was a severe fight between them.

I gave her a surname also, now she is Pinky Joseph, and Joseph is her previous owner who left her. 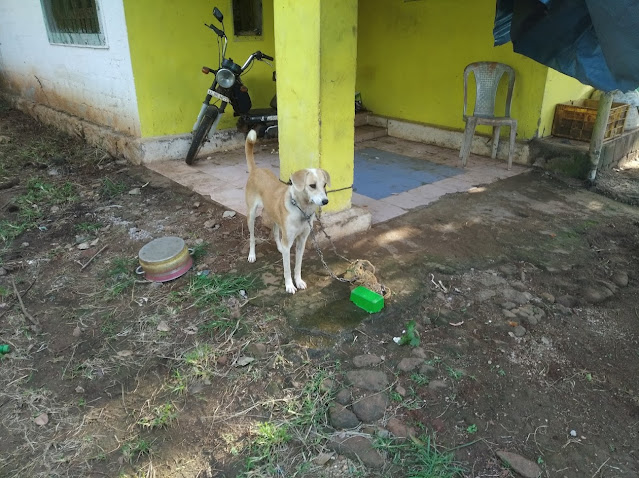 Posted by Nandakumar at 8:49 PM No comments: