I planted about 1000 Njali poovan (Elakki) banana suckers in Aug 2013.Most of the suckers were bought from a near by farm and some where from the farm itself. Planting was done by just making a pit and putting the suckers and covering with soil, no manure was given. Typically people put cow dung, compost or mulching in the pit. I didn't want to invest more money into farming, so thought of taking a minimal expenditure path. Watering was given once in a week and around 750 survived the peak summer but growth was not very good. Typically after 9-10 months I should have be able to harvest them,

During the rainy season, I put some dried cowdung to 10 of them just to see the effect and those were growing some more healthy compared to the other. I employed labor to cut the grasses and but they were not mulching it around the plants.

Later using Scythe I started cutting and mulching and it was a tough job since lot of grass had grown after the rains. But once it was done, maintaining them at the summer was much easier.

Seeing the growth of grass, broadcasted sunhemp through out this area, in some areas, they had established well, but not every where. Later thought of establishing an invasive leguminous cover crop and bought seeds of Pueraria Javanica and broadcasted it some part. But it didn't germinate well or it was covered by grass, so planted them in grow bags and transplanted a few plants and they are coming up well. Hopefully they will establish well in an year throughout this area. Some photos.. 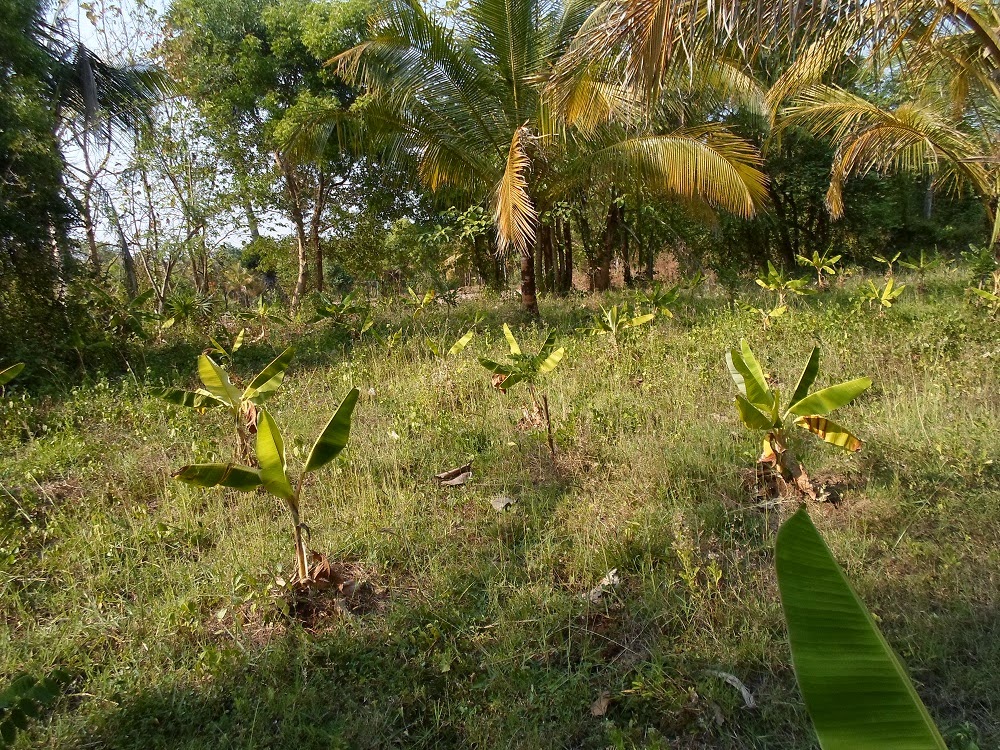 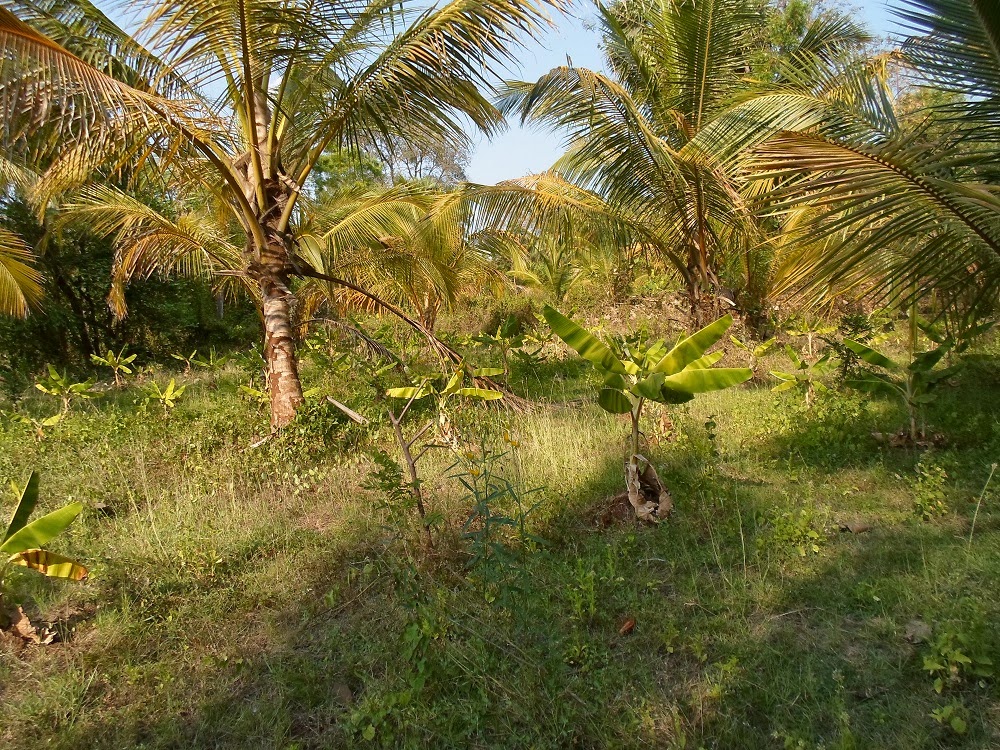 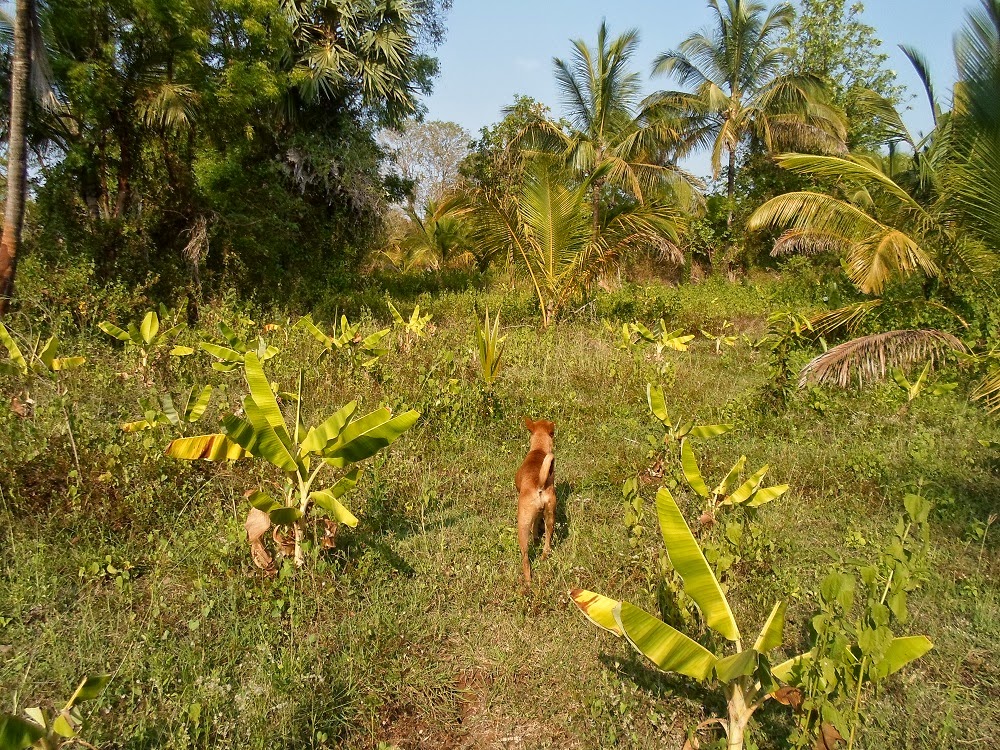 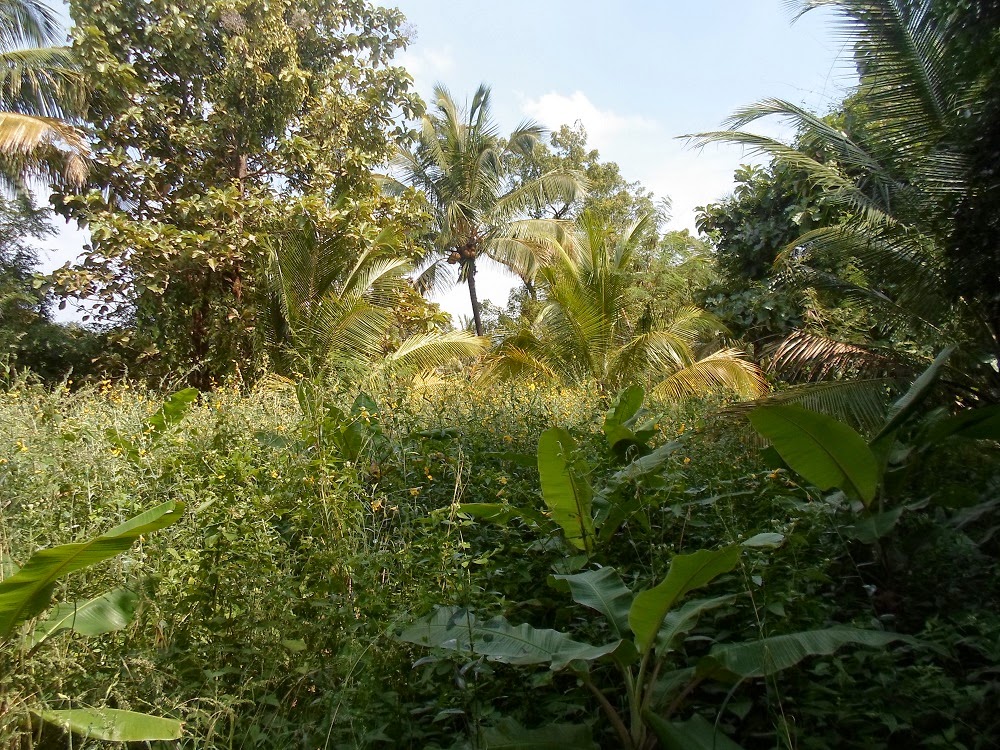 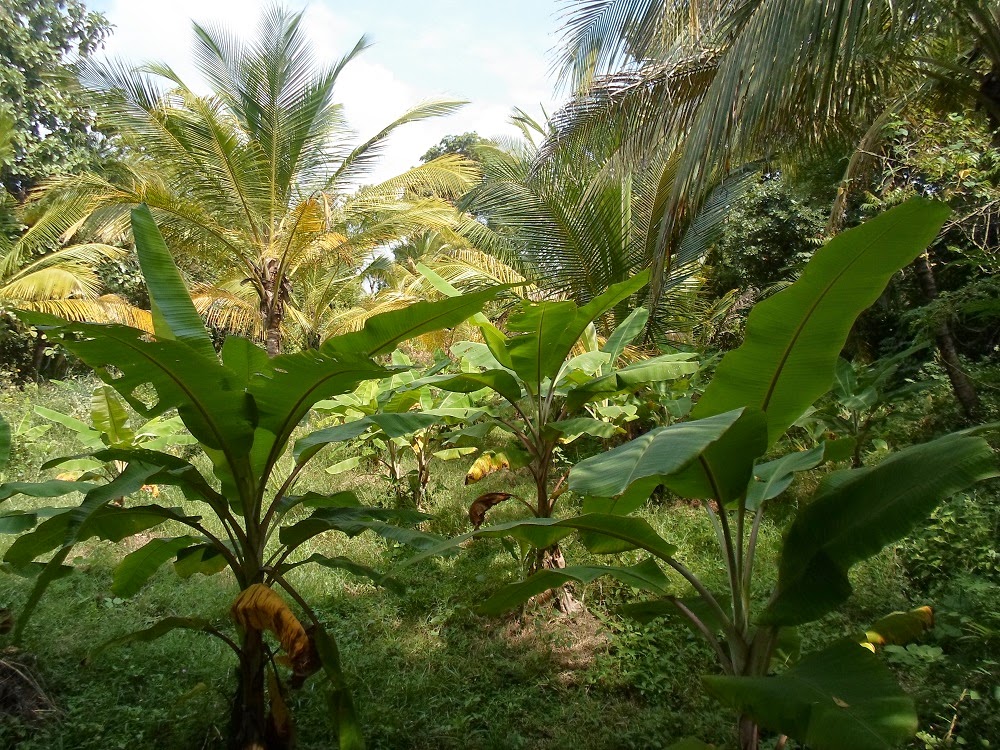 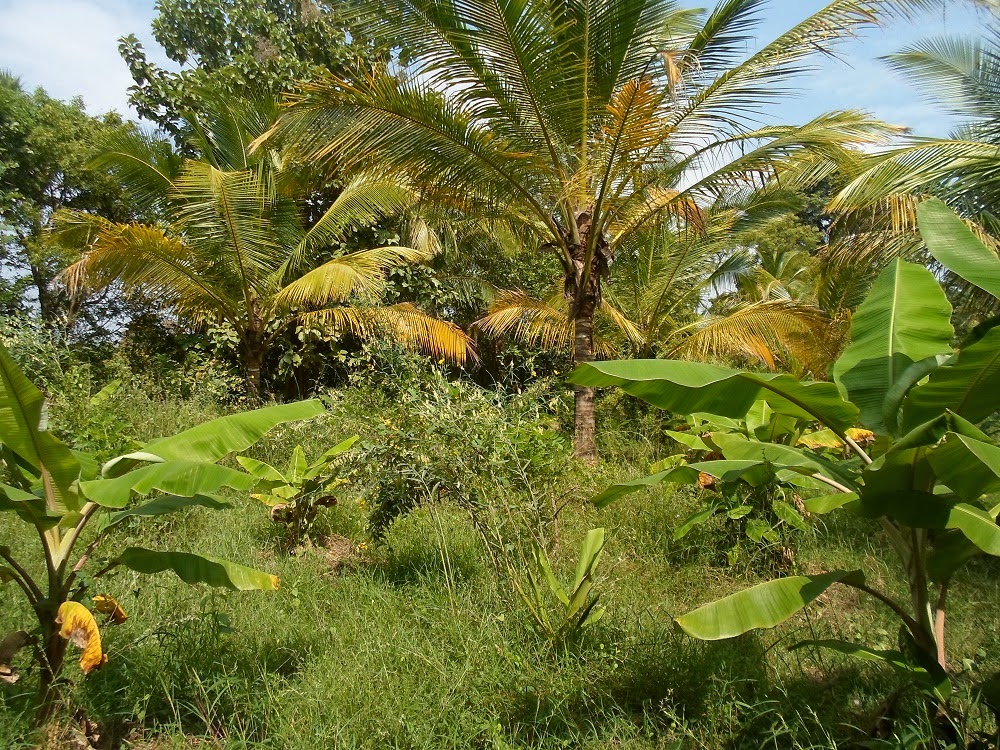 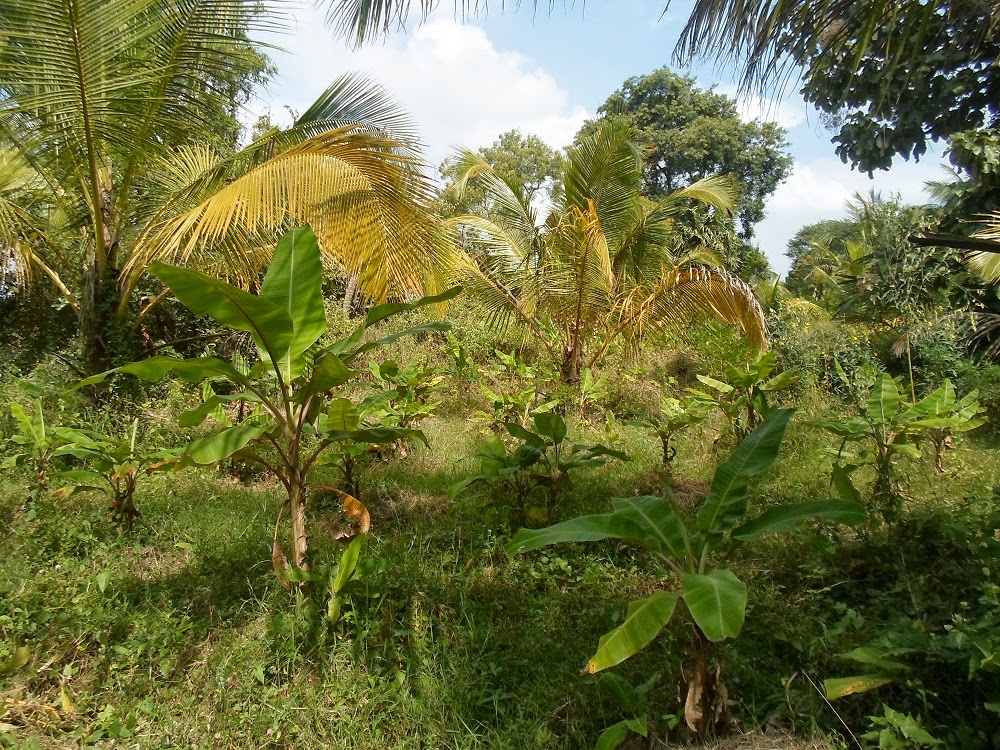 In this area, I had broadcasted sunhemp and it grew well and could see plants are healthy in this area. Cut and mulched one area. 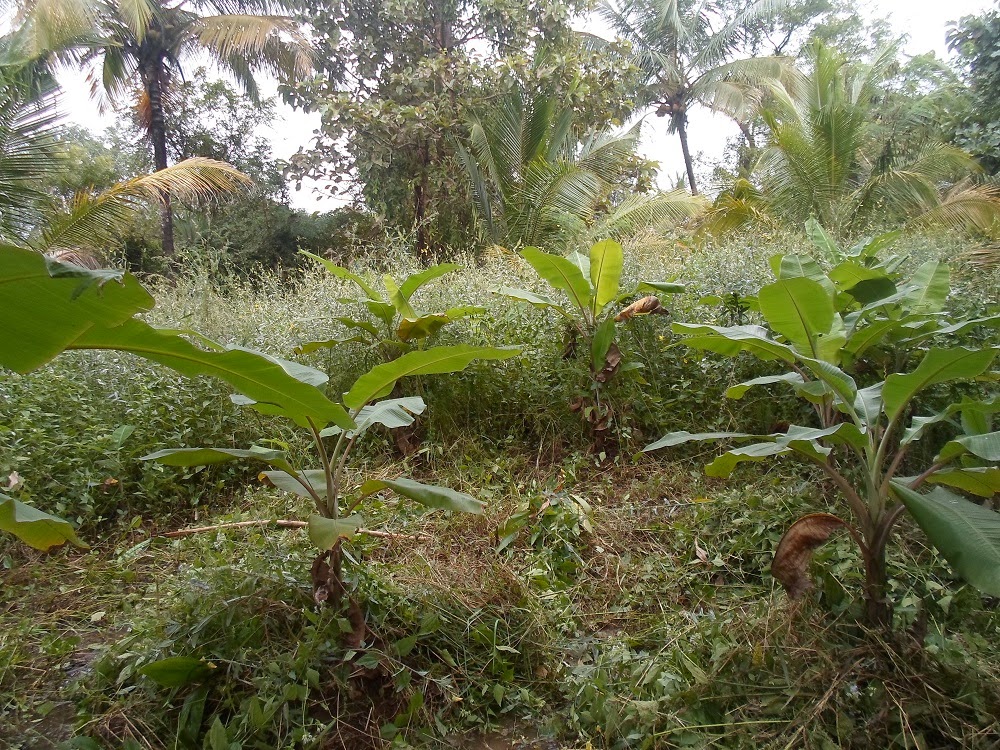 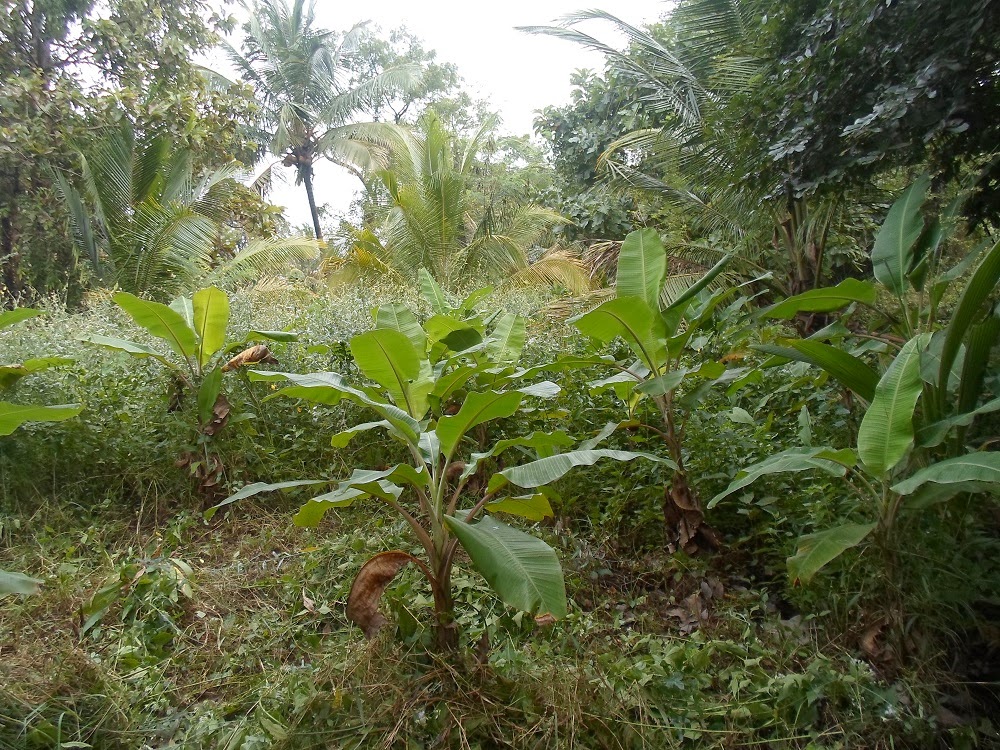 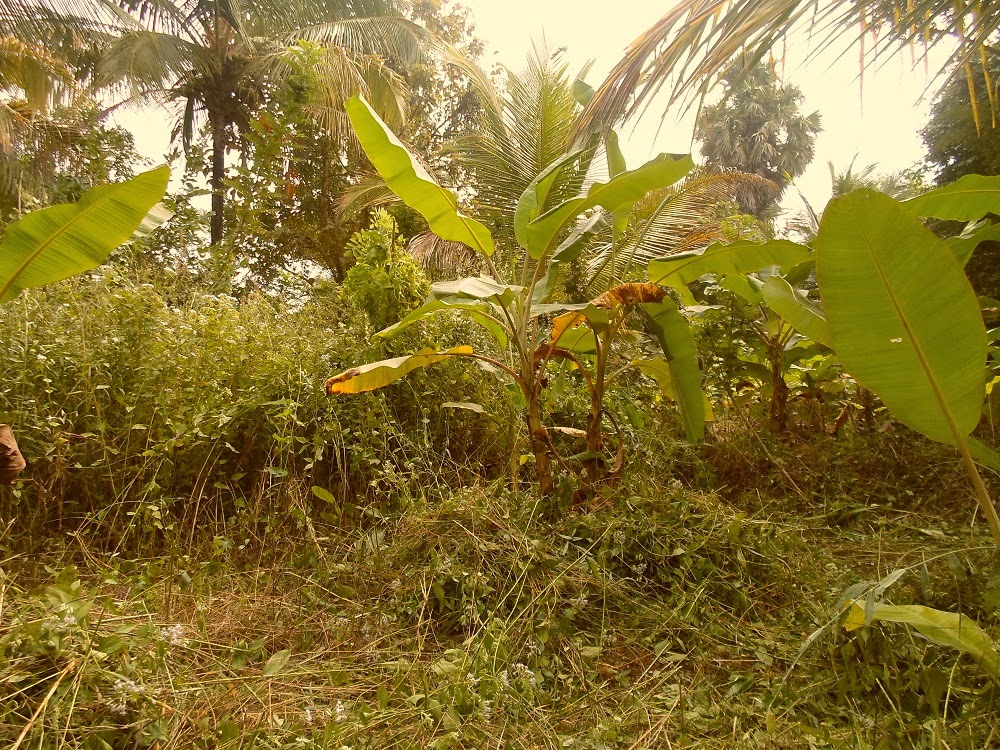 Pureria Javanica growing in some areas...hopefully should give a good cover 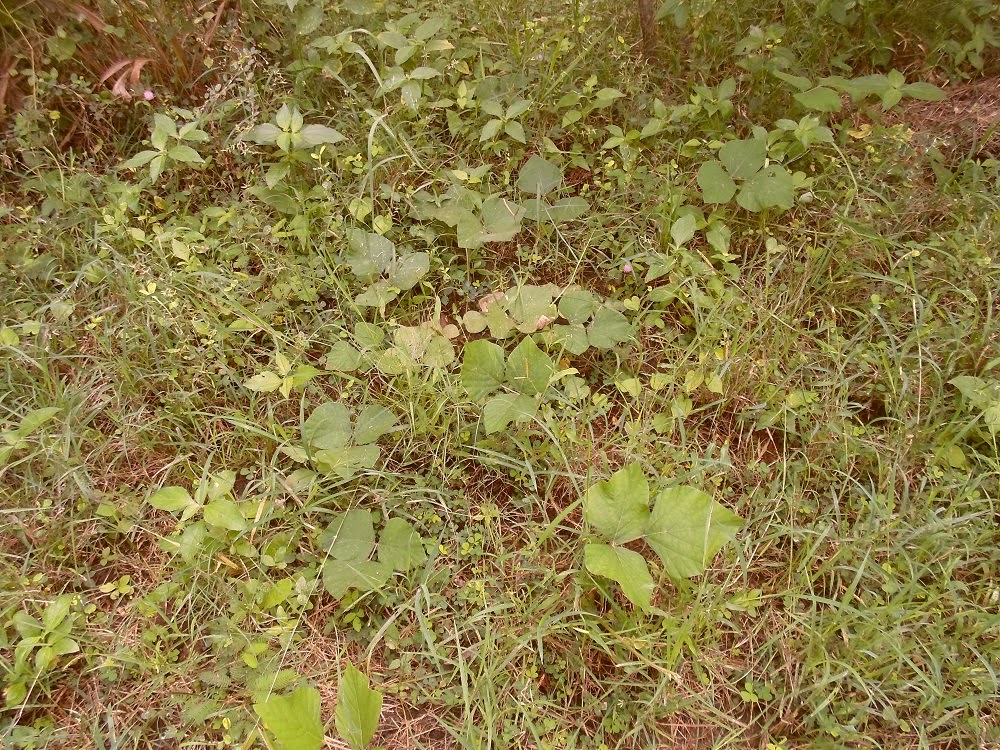 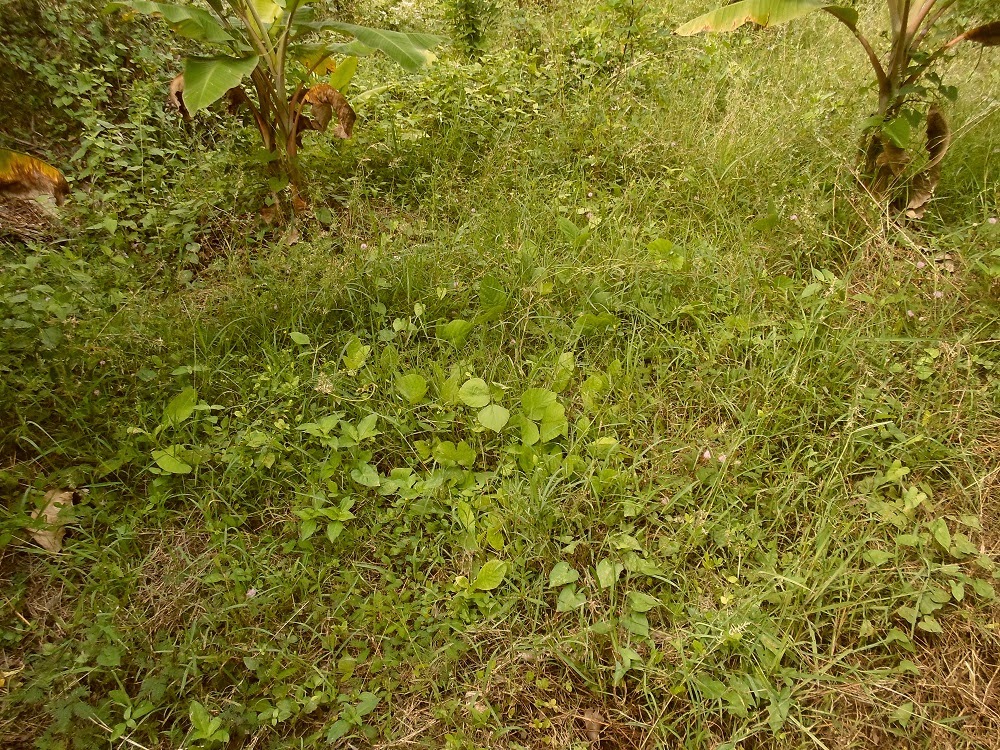 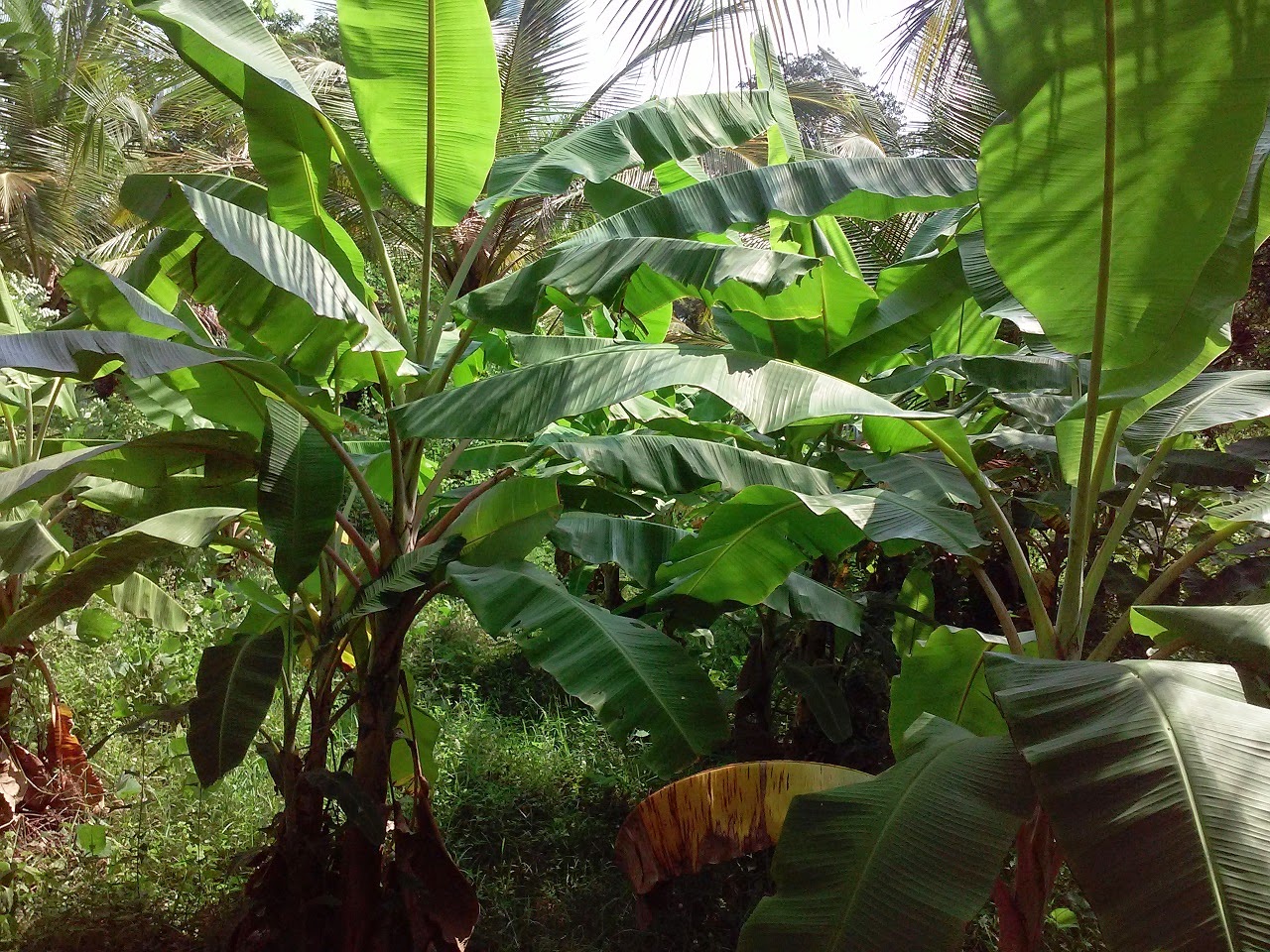 I didn't update this section for a long time now...thought of updating it...bananas has become very dense and need some maintenance of leaving only one or two. Also thought of applying some cowdung... 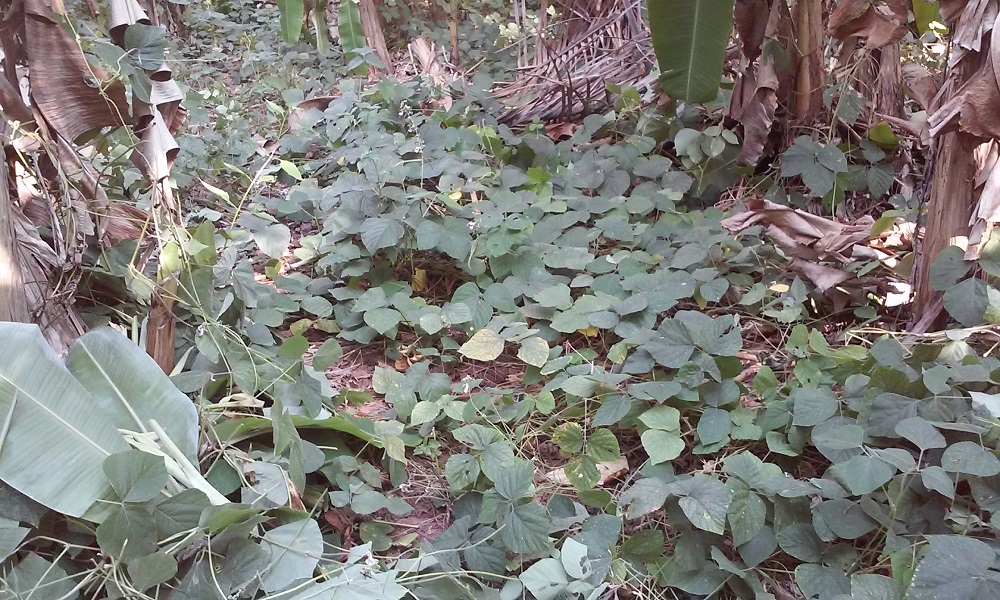 Pureria cover crop established well in some places..Since summer is severe, and rain was less, just left them without cutting. 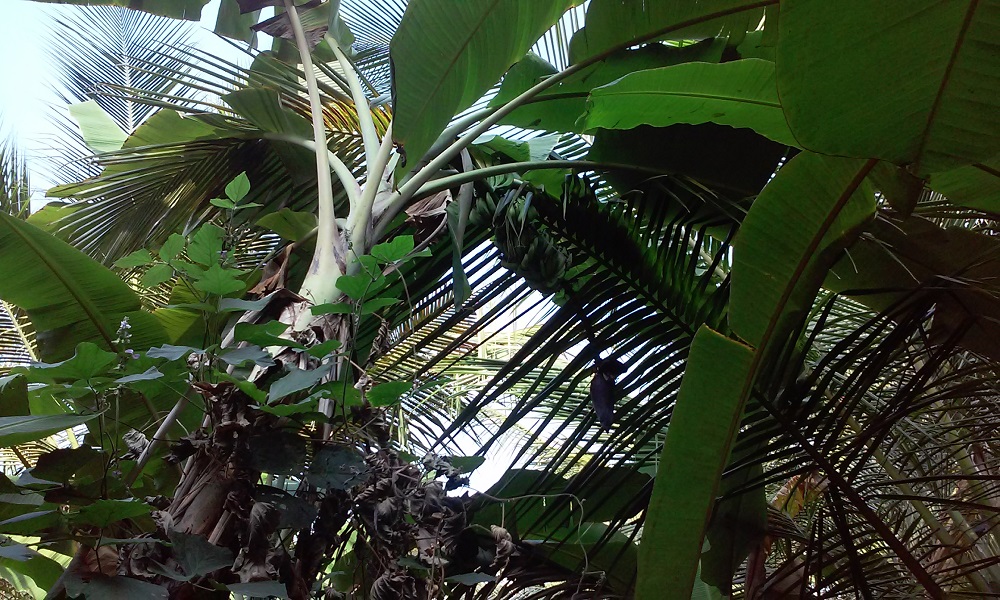 In a group, just maintaining only 2-3 plants, cutting all other, now the remaining ones are doing good. We can leave all without cutting any, provided, land is very fertile and all plants gets enough nutrients, 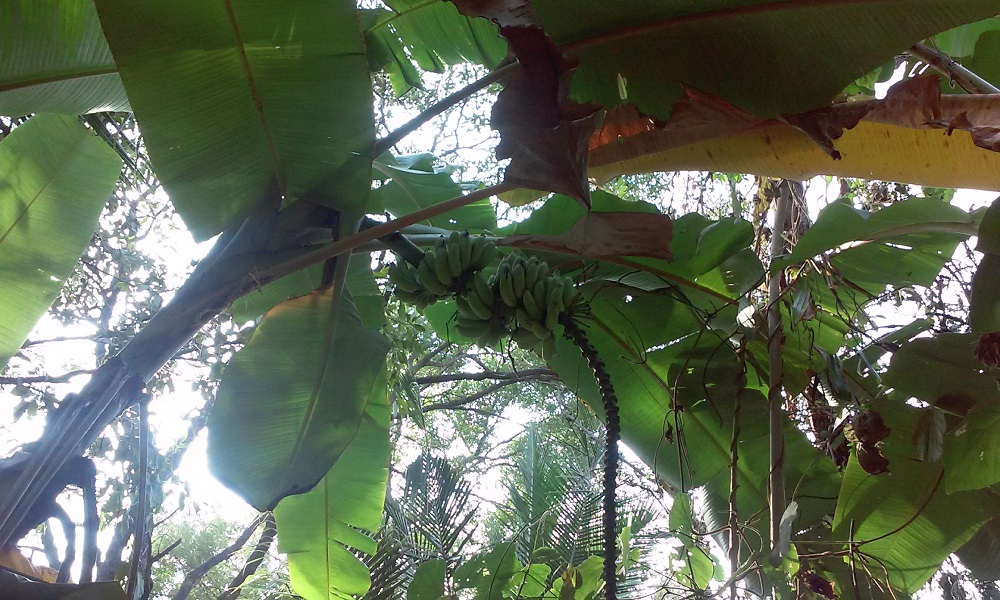 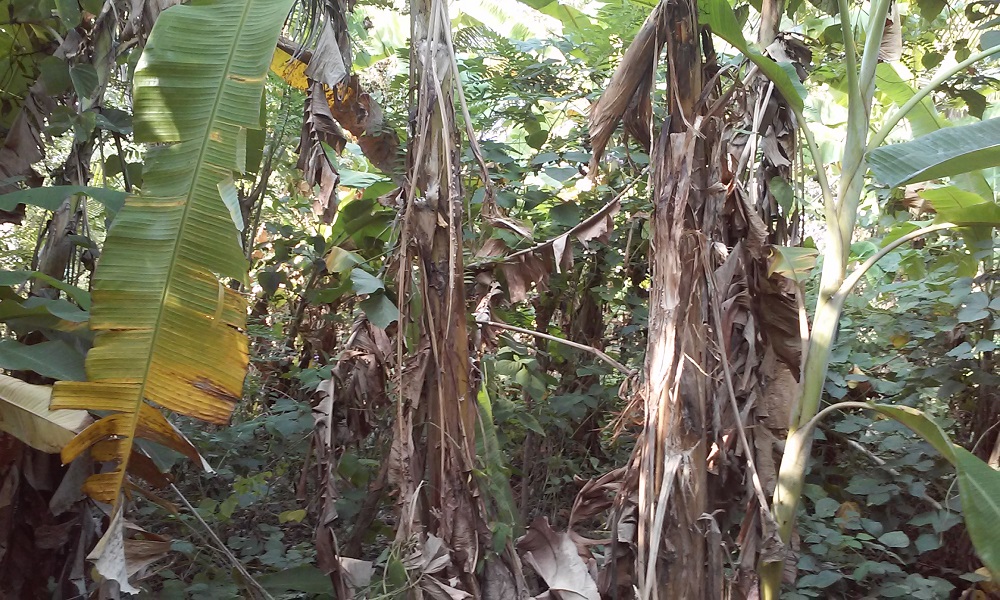