Leguminous cover crops are said to be superior to growing a ground cover of grass.  According to experts, making land fertile with just growing grass take many more years. I don't learn too much of theory which is difficult to understand, but they say Carbon to Nitrogen ratio is important in the mulch, in grass Carbon content is more Nitrogen is less, and in leguminous crop, this is much better. Nitrogen being an important content for healthy crops, leguminous cover crops helps to make crops healthier.

I tried Sunhemp and Velvet beans in coconut area, they are OK, but some time, they don't establish very well. I may have to reseed them again, if germination is bad. As I heard, cover crops like Pueraria Javanica (Tropical Kudzu) and Mucuna Bracteta has to be just established once and after that they will remain for many years, but the problem will be in controlling.

This made me to think about invasive cover crops like - Pueraria Javanica (Tropical Kudzu) and Mucuna Bracteta. Mucuna was seen in rubber plantations in Kerala and they keep a ground cover green even during peak summer. I searched to check if anyone is using in orchards and found two farmers in Kerala. One was a farmer from Kannur, Kerala named Francis and he used Mucuna as cover crop in his pepper crop - www.nif.org.in/upload/pdf_file/francis_pa.pdf. Talked to him and he was recommending Mucuna and even though it is invasive, it can be easily controlled. Another farmer was Jayadevan, Alanellur, Kerala and he was not completely for it, since it just takes over and spreads to different places and it can not be used as fodder. He had used it in one area of coconut farm and that area didn't require any watering, he was planning to replace it. Since there were plenty of red ants, there was no threat of snakes. I talked to Kailashamurthy of Mysore and he suggested to use Pueraria. Pueraria also is used in rubber plantations widely. Later found one farmer in Palakkad who had used Pueraria Javanica in his coconut farm. His name is Anilkumar and he was OK with it, but again it climbs onto everything and even though no snakes are found, it is scary for the laborers to walk through it. He is phasing it out and try to grow other legumes. Some photos of Anil Kumar's farm .. 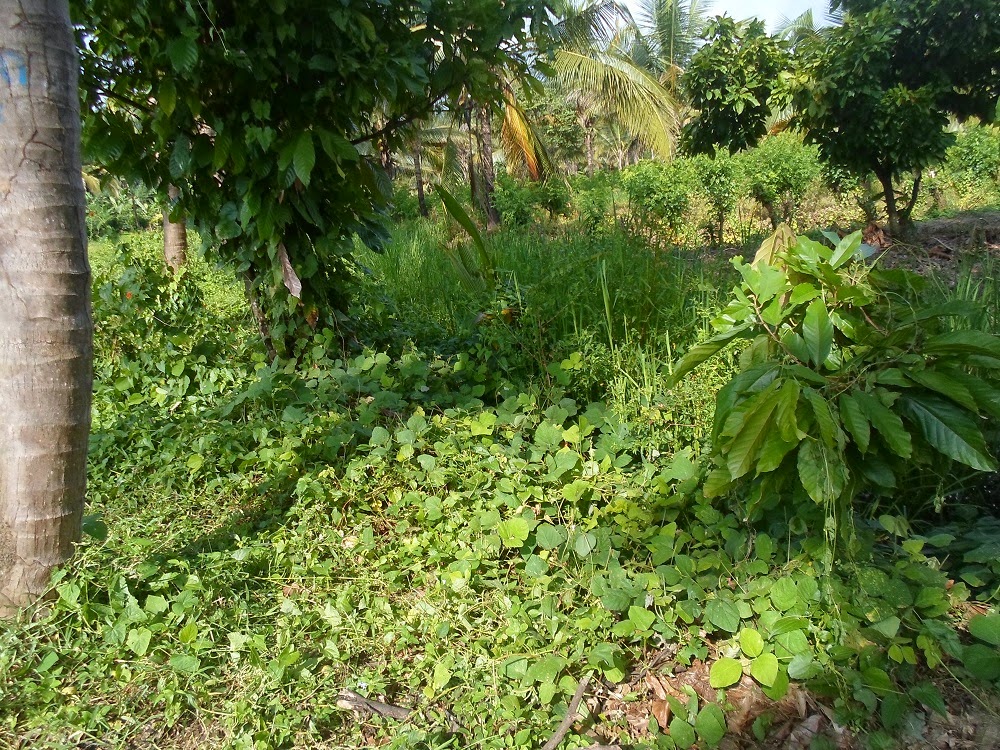 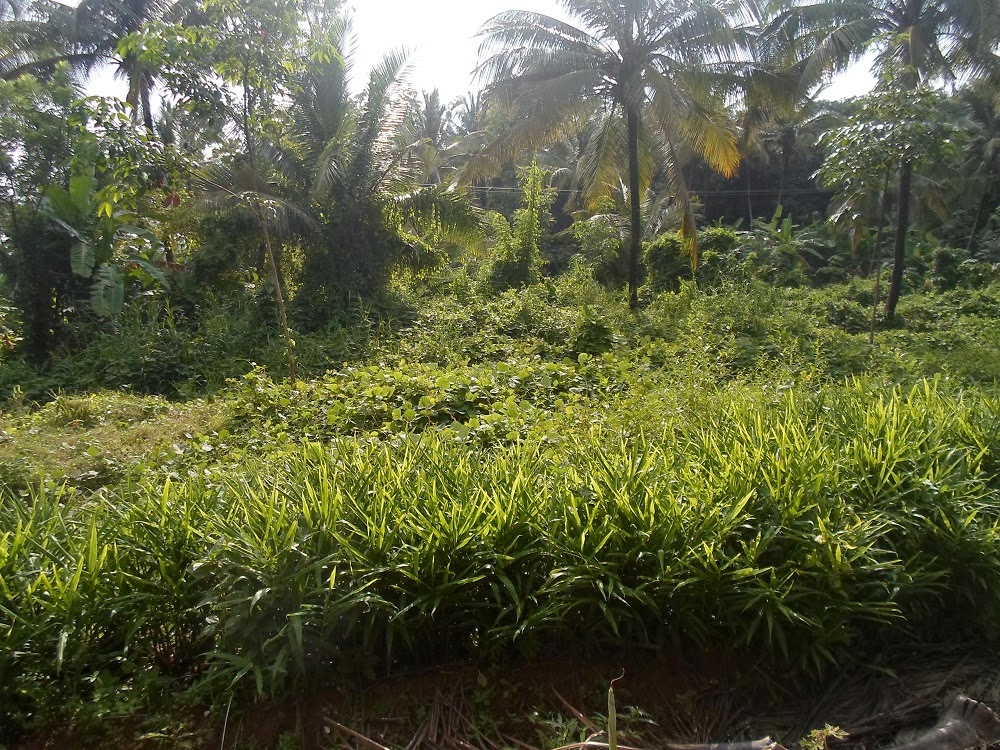 I found some recommendations in Masanobu Fukuoka's natural farming book, about tropical kudzu, so thought of trying it out in one area where I have planted banana. Probably after some 3-4 years, I will also phase it out using grazing or cutting it.

Pueraria Javanica being established in my farm...it is crowding out grass, but climbs on banana,trees etc... 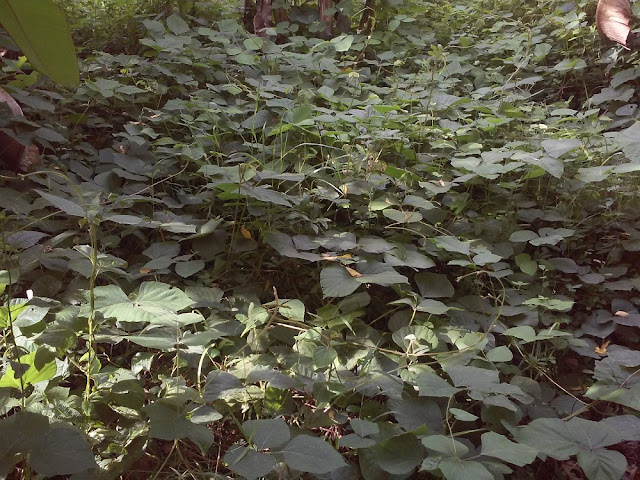 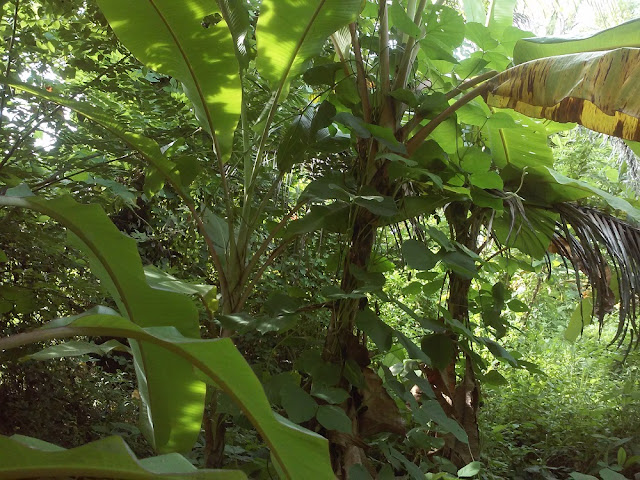 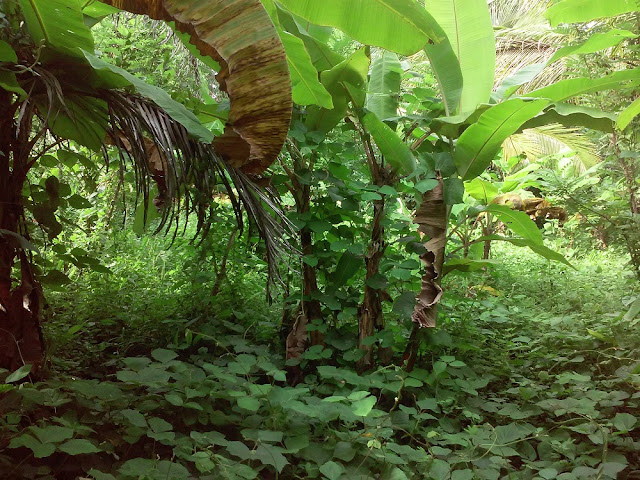