Some time back had visited a farmer called 'Varghese Tharakan' in Trichur who had done a wonderful rain water harvesting in his hilly farm. He had made deep trenches against the slope and directed all the rain water to these trenches. He had planted rubber saplings throughout this farm and also bananas and without any drop of irrigation he could harvest banana and his rubber trees grew well.

Then we hear the news that he cut all the rubber trees and banana and planted a special variety of Jackfruit tree which he named 'Ayurjack'. He discovered this jackfruit tree and it was very tasty and hence propagated it using budding and it gives fruit in 1.5 years. He realised its potential and planted around 1000 jackfruit saplings. Some of his trees have fruited and it looks fascinating and he became famous. He runs a nursery of jackfruit saplings and sells it at rupees 500 onwards and big saplings costs 1500 rupees. Whether this is same as popular Vietnamese early gold jackfruit, not sure?

I visited his farm with my friend and bought two saplings for 600/ rupees each. Even though I am not a fan of budded trees, thought of trying it out. Took around 2x2x2 feet pits and filled with dried cowdung and neem cake (little bit) and then planted it.

Ayurjack saplings in my backyard 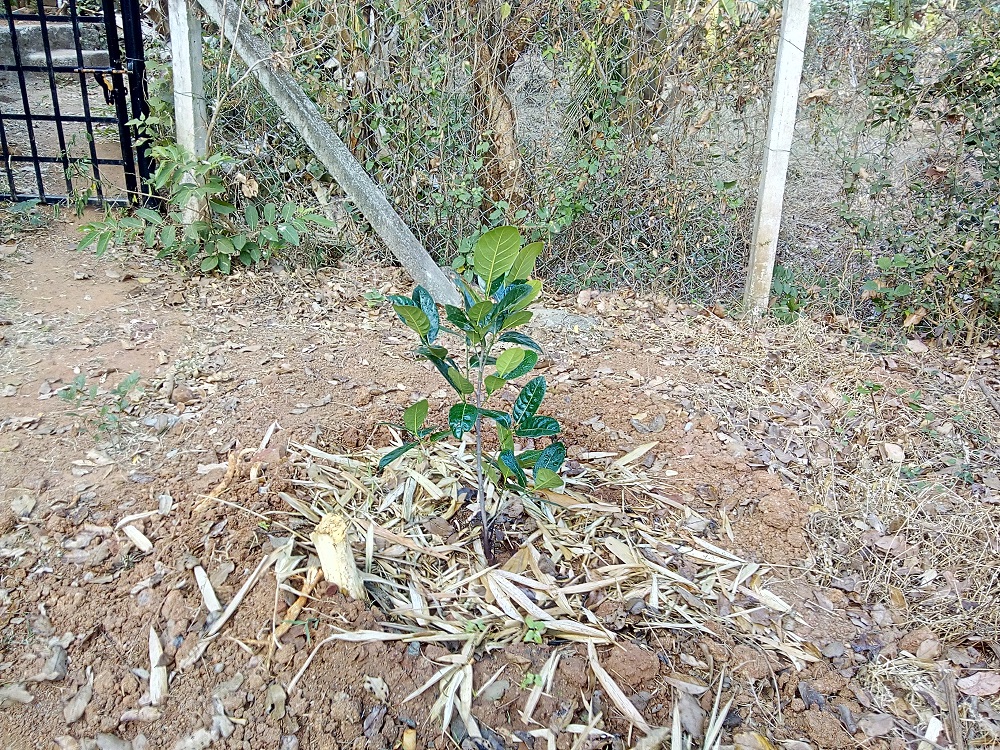 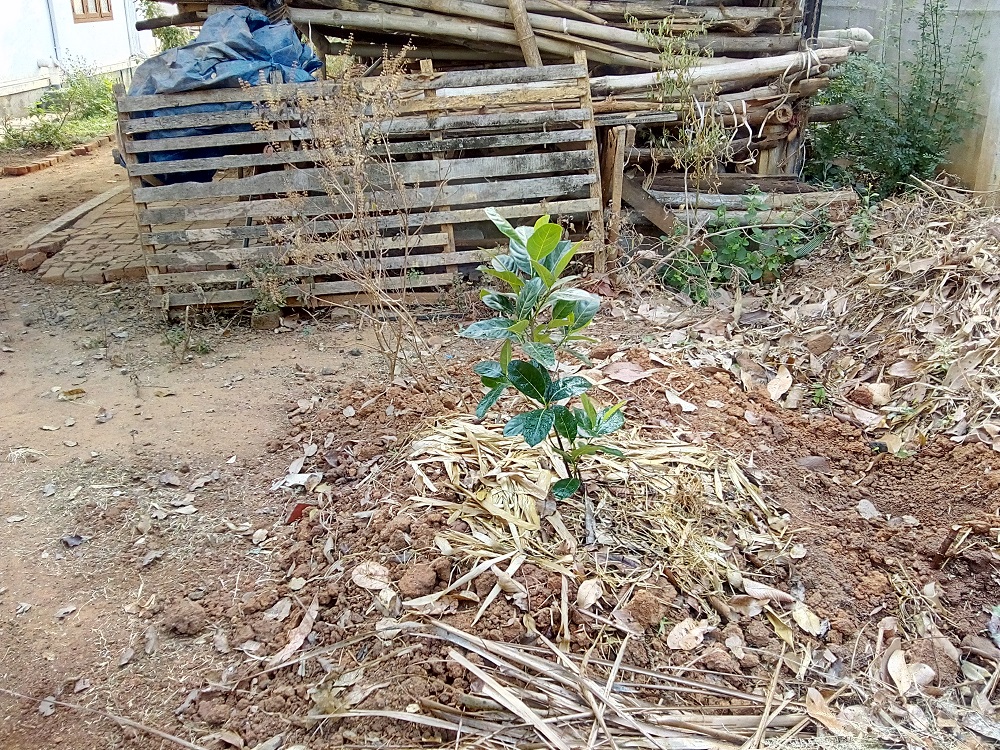 05-Feb-2019
There are some debate happening whether the Ayur Jack is Vietanamese early or not. Here is some video which explains some findings, it looks like it is Vietnamese early Jack fruit. 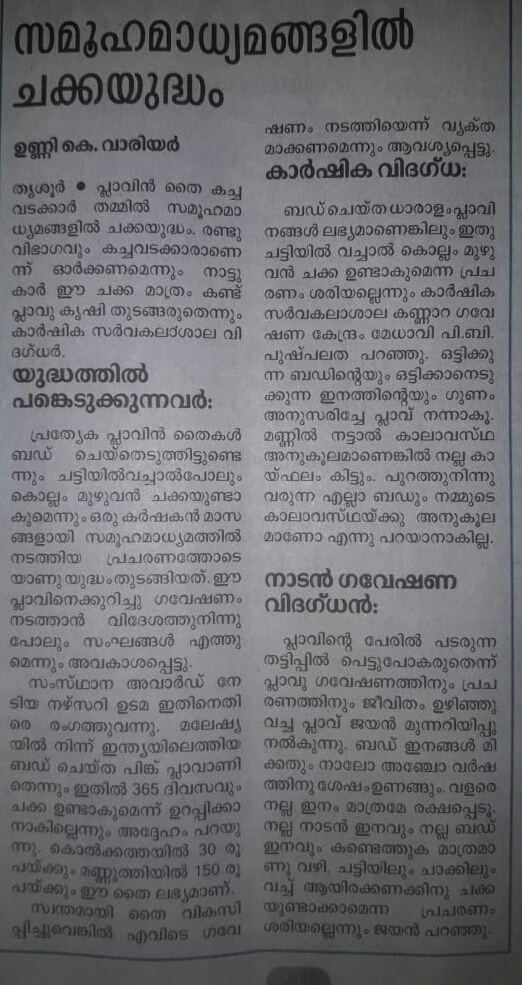 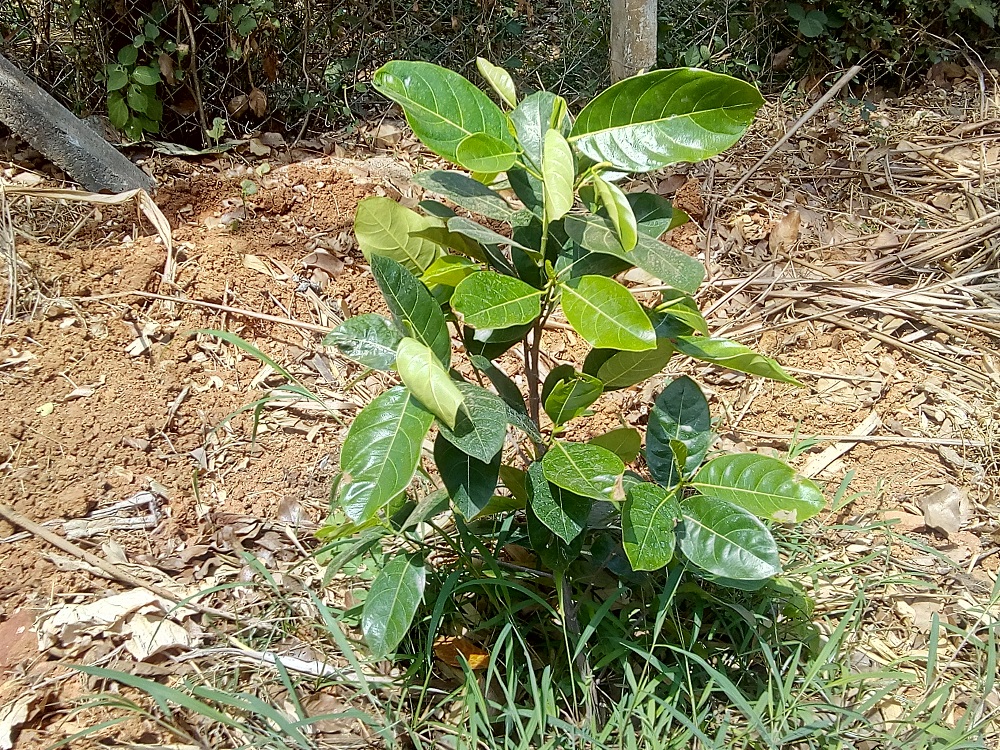 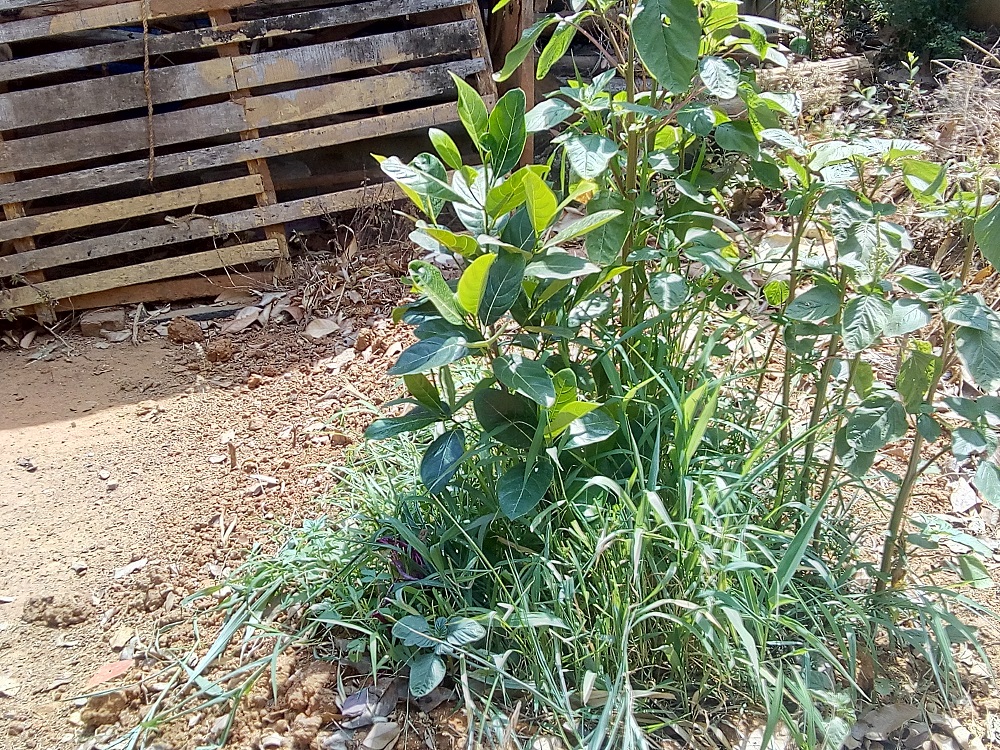 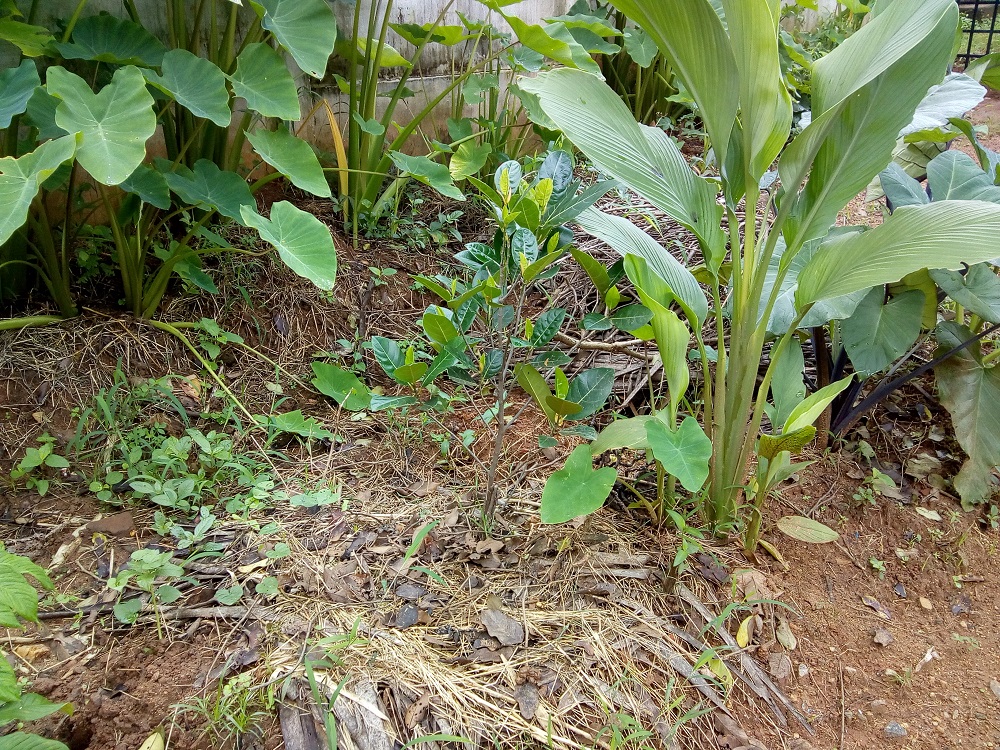 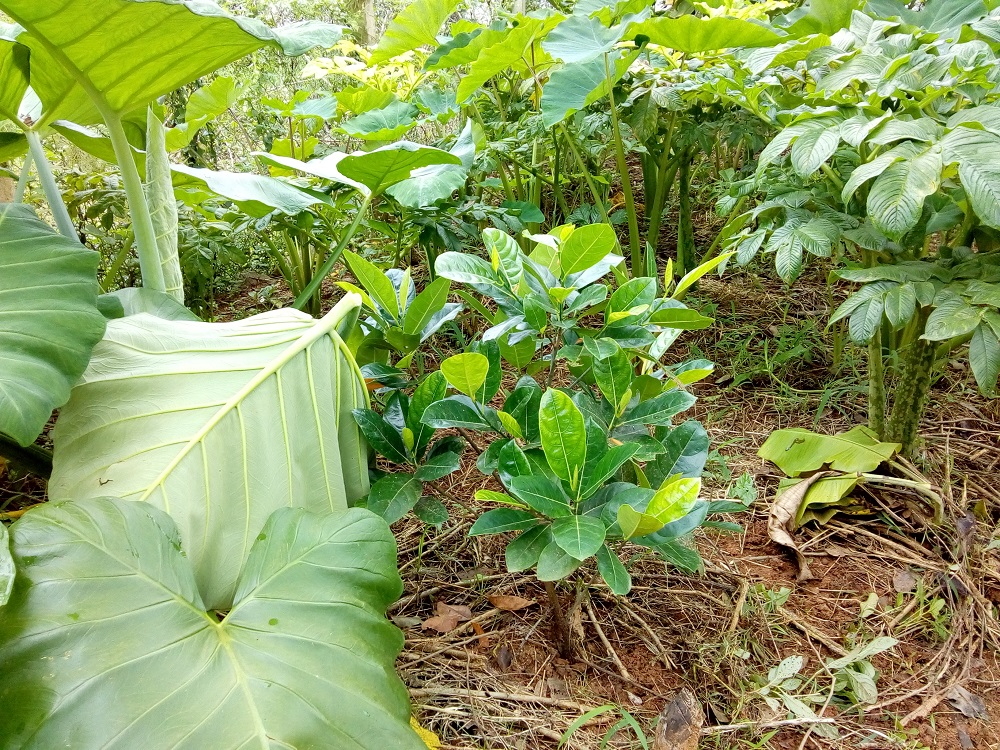 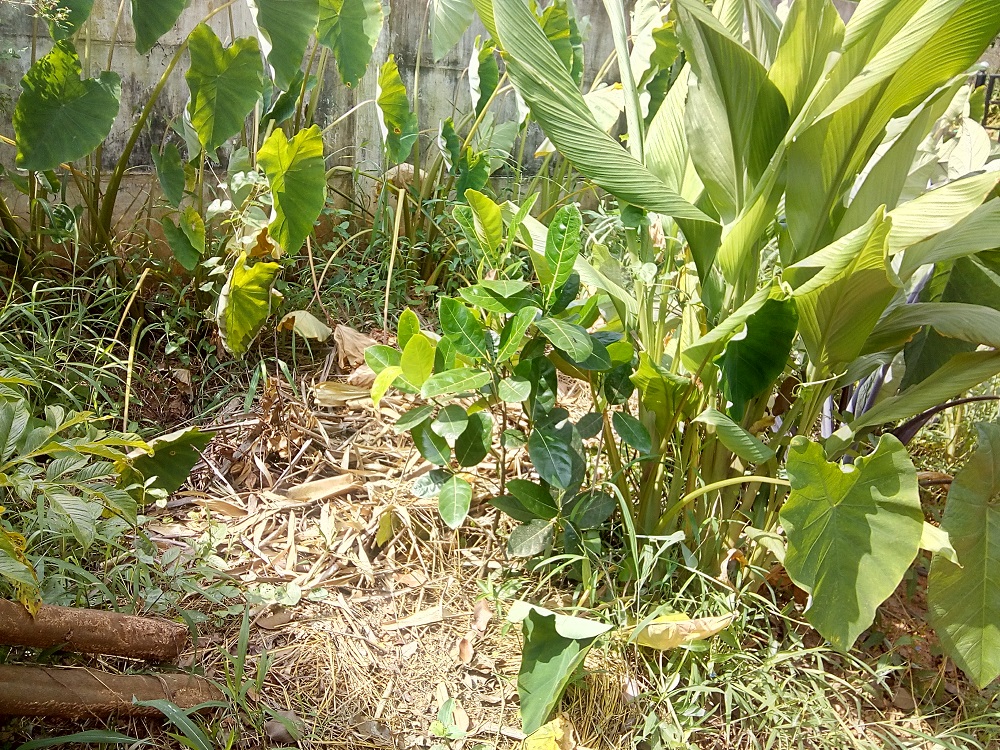 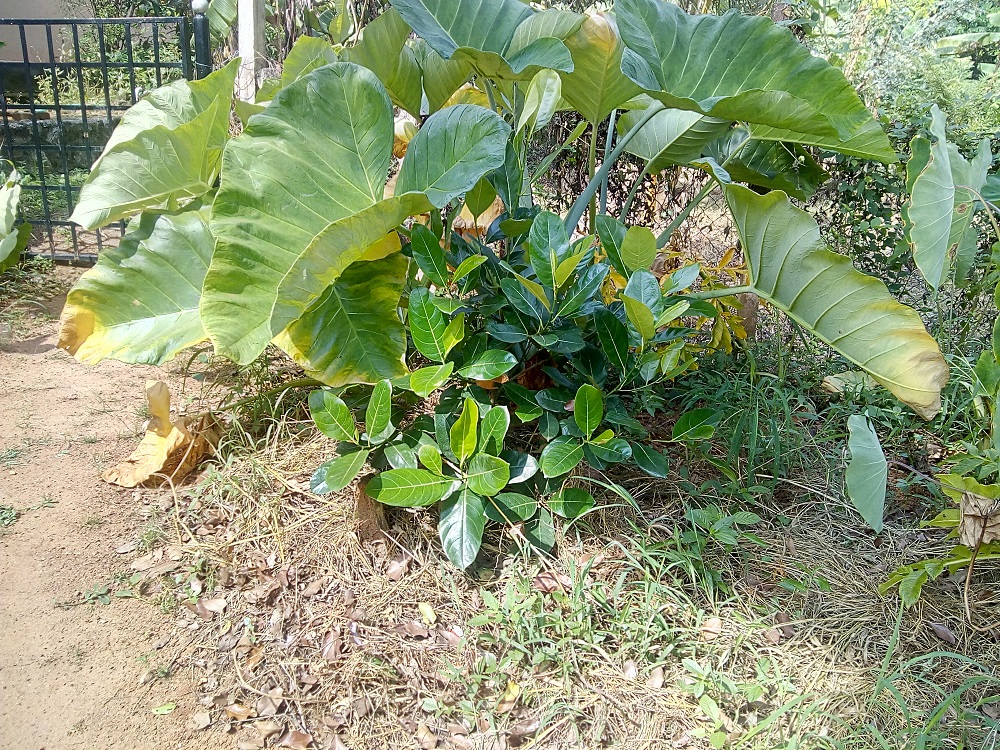 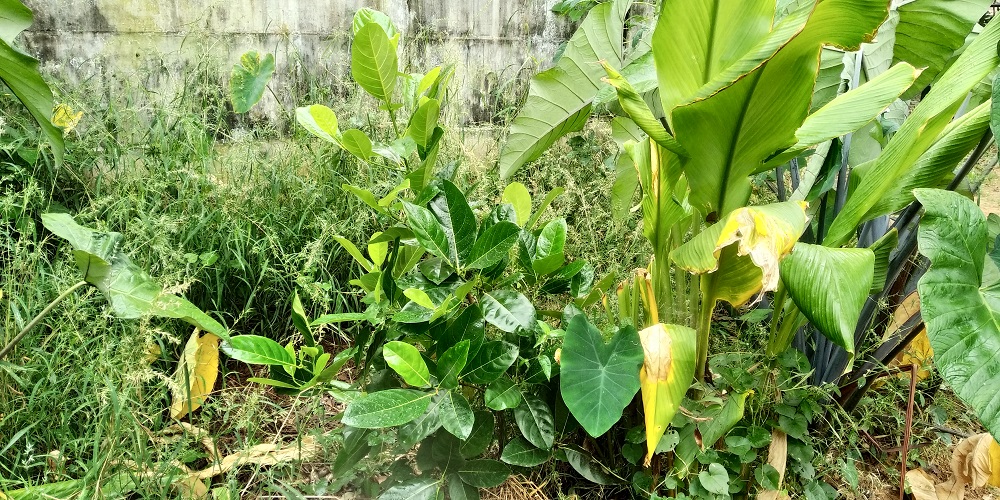 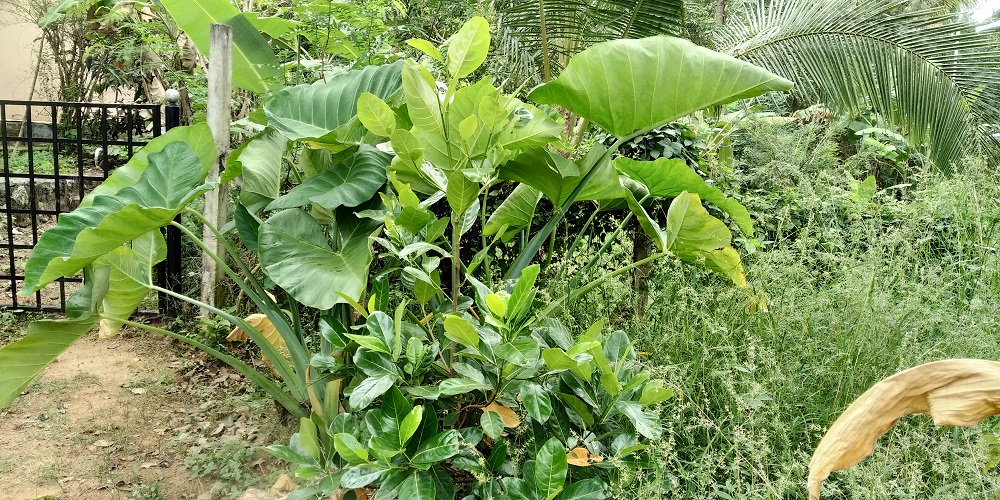 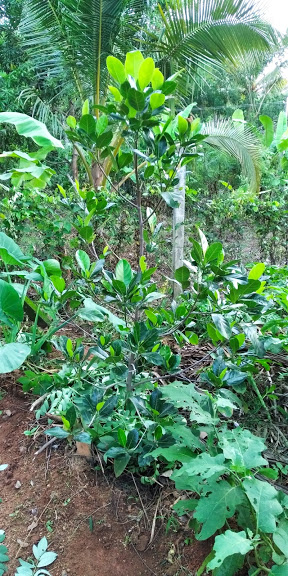 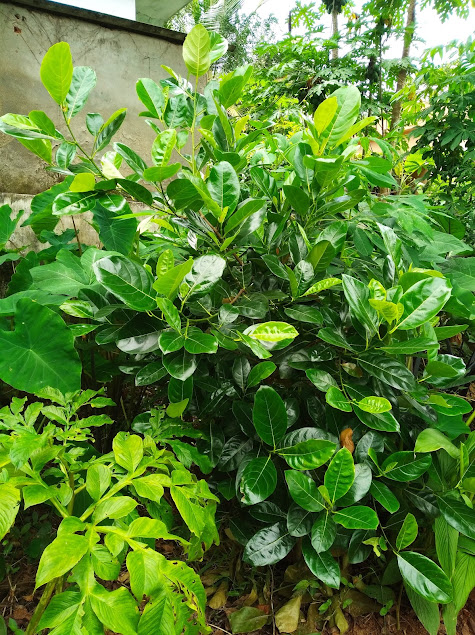 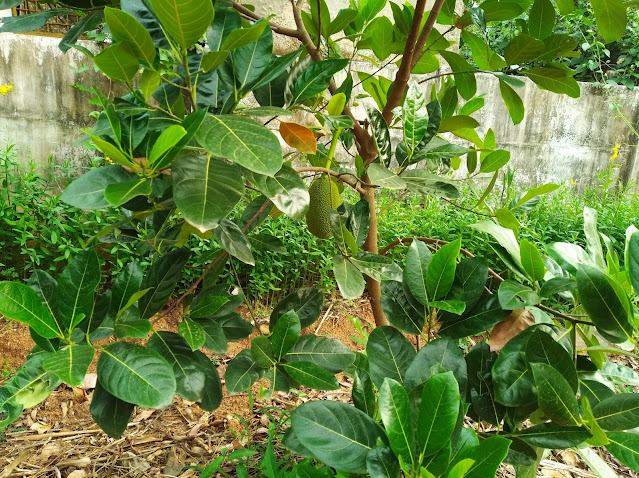 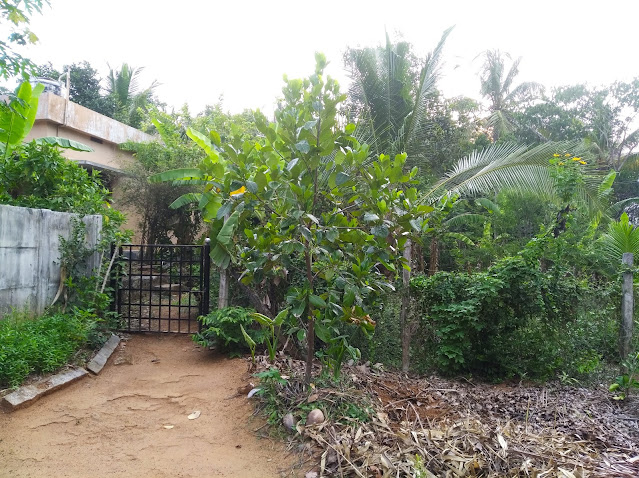 Humus formation in tropical climate is less since temperature is high and at high temperature mulching materials oxidise and lost to atmosphere. When we grow cover crop in rainy season and by the time mulch is formed and by the time it is useful for next cropping cycle, much of it will be lost in the summer coming after the rains.

I grow cover crop like sunhemp, pureria javanica and also leguminous trees like glyrecedia and subabul. Initially I had a confusion when to cut and mulch these covercrops. I could see that when I cut the covercrop or leguminous trees after rain stops, then the cover will be lost and it becomes very dry. So I stopped cutting any grass or covercrop or tree cover after the rain. So basically to form good humus in your farm, grow as many different types of covercrops and after cutting and mulching, make sure there is good shade for the mulch. Another option is to make trenches in the farm and then mulch the trenches, since sunlight and wind does not reach trench directly, good humus will be formed here.

Recently while reading the book 'Restoring the Soil' by Roland Bunch came across the following text.

A combination of two or three gm/ccs may provide the best results. For example, using trees and another type of low growing gm/cc could be a practical answer to this problem. By reducing the ambient temperature at least 10°C, dispersed trees can cool the fields enough so that the gm/ccs’ organic matter will not be burned off, and the soil’s fertility can be maintained. The temperature can be lowered even more if the trees are not pruned until the months right before the next rainy season, as is normally the case. Thus, dispersed shade can largely eliminate the problem of dry season burn-off of the gm/ccs’ organic matter and nitrogen.

"Agronomists have argued that green manuring will increase either the humus content or the supply of available nitrogen in the soil, but rarely both at the same time. The humus content is only increased appreciably if material fairly resistant to decomposition is added to the soil (high Carbon:Nitrogen ratio), and this type of plant material is typically low in nitrogen (less than 1.5 per cent on a dry-weight basis). The available nitrogen supply is only increased if readily decomposable material high in nitrogen, such as immature green plants, is incorporated into the soil. The amount of organic matter that may accumulate will vary with the soil, climatic conditions, and the age and type of crop.

The accompanying diagram shows that mature residues, whether legume or non-legume, have a much higher C:N ratio than do the younger succulent materials. Also, the legume crops, which have two to three times the nitrogen content of the non-legumes, have lower C:N ratios throughout their life cycles, and even if turned under when mature (e.g. 3rd year alfalfa, 2nd year clover) will yield their nitrogen more quickly than if oats or buckwheat straw were ploughed under. "
Posted by Nandakumar at 7:35 AM 1 comment:

Read about the Parachute rice planting from the Kerala agriculture magazine 'Kerala Karshakan' 2019 January issue. Later saw this in Mathrubhoomi agriculture news and when searched in youtube, there were more videos about this, was surprised to find this.

Basically seeds are germinated in trays filled with manure and soil, then 12-15 old seedlings are pulled out from tray and thrown across the field. The field is prepared in conventional manner by tilling and puddling and made muddy. The seedlings land with base and may be lying in the filed, but later gets up.

Planting in line also is possible and can be used for SRI planting. 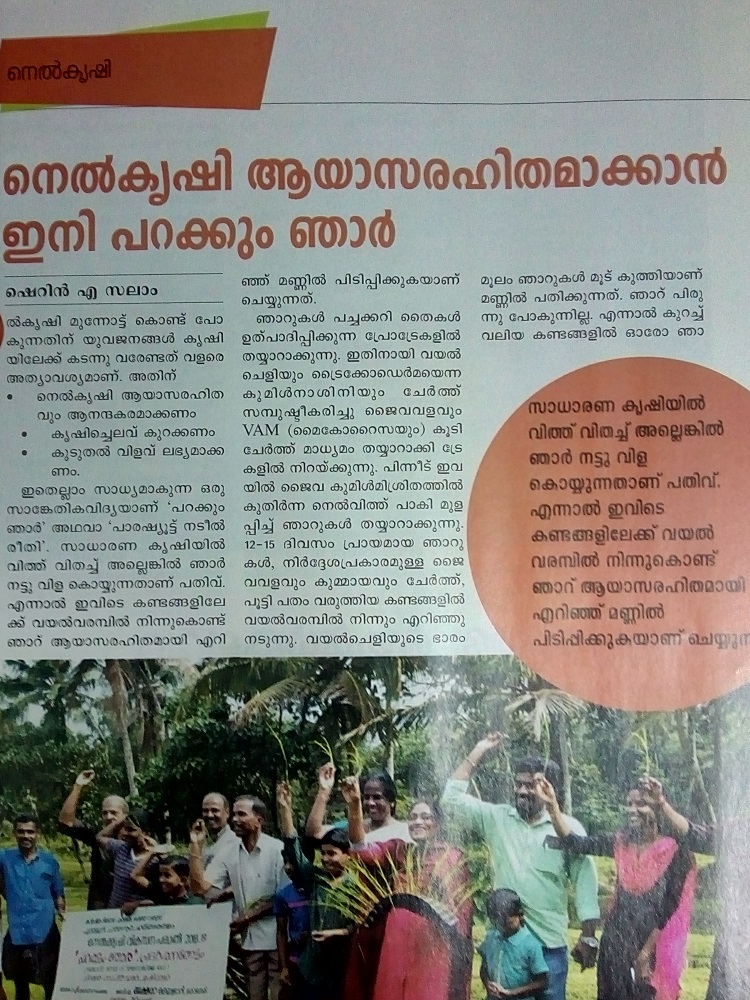 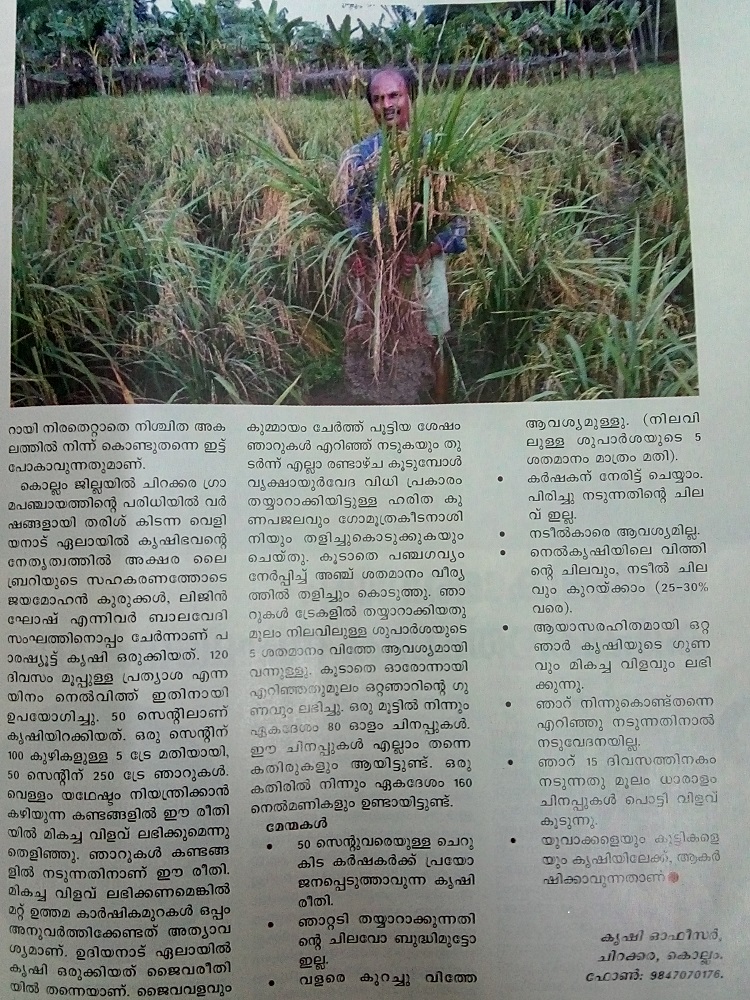 https://www.youtube.com/watch?v=0_BT3E3JlnI - How to planting rice parachute
Posted by Nandakumar at 5:14 AM No comments:

Sabi - Female farmer from Wayanad - Making a living from 0.1 acre of land

Came across a video about a women farmer from Wayanad called Sabi who makes a living from her 0.1 acre of land. Here is the summary of story...

Sabi and her husband Rahim are from Trivandrum and at one stage of life, they lost all what they had earned and relocated to Wayanad where they bought 0.1 acre of land which was barren land. There were inspired by a malayalam movie called 'Valsalyam' where Mammooty plays the lead role. He looses his entire property as part of family settlement and at the end of the film, he moves to a barren land and starts his life from there as a farmer.

Since Sabi just owns 0.1 acre land, no banks considered her as a farmer since as per the standard farmer needs 0.2 acre. Finally she takes loan from her uncle and buys 4 goats and sets the farm, later she sets up a shed and buys 1000 button quail (kada in Malayalam). Her house is at one corner of the land which is just 300 square feet and the rest of the place is fully utilized for farming.

After 45 days, button quail lays eggs and gets around 800 eggs which she sells at two rupees per egg, spends around 700 rupees for food and net profit is around 900 rupees per day.

Right now she has around 13 goats and she has around 10 baby goats for selling and earns her around 150000 rupees per year. She cultivates vegetables around the house and does not have to buy any vegetables from and sells surplus. This earns her around 8000 rupees per month. Overall she makes a comfortable living from 0.1 acre of land. In addition, she has many fruit trees planted and also feeds lot of birds which makes them happy. Green leaves and manure from goat,quail,chicken etc are used as manure and is completely organic.


This is quite inspirational, and many can make a living with integrated farming of animals,birds and cultivating vegetables.

Posted by Nandakumar at 4:25 AM No comments: