Three years back I had received some samples of happy hill rice from a Japanese friend, and had grown them in one season. After that kept the seeds for an year, and then they were not germinating. I had shared the seeds to couple of people, and all had lost it.

After a long search found Michal Miksik through a web site called https://bcountrylivinginjapan.runboard.com. Contacted him and he was ready to send seeds, but the first set of seeds didn't make it, they were lost some where in the transition. After hearing this, he was ready to send the seeds once again and this time, he sent it by registered post and it reached on 17th day.

I have close to 100 seeds and 4-5 people have already requested for some seeds and will be sending them at least 10 seeds. I am requesting this time to send me 10 seeds back, after they grow the paddy. This will help me to distribute seeds to more people. 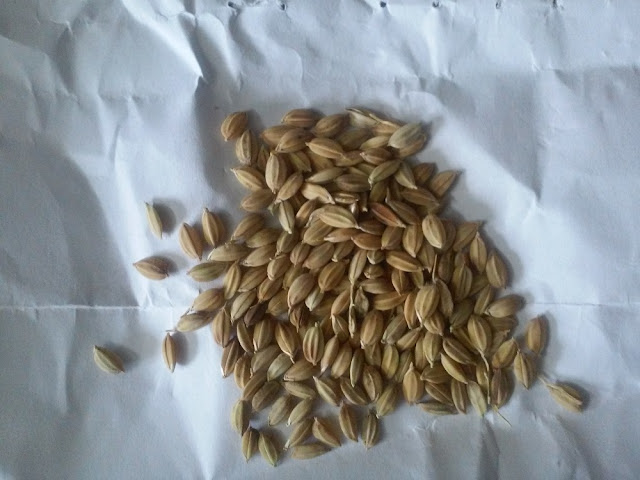 I kept 10 seeds soaked in wet cotton and on 3rd day, 5 seeds have germinated. Those seeds were put in the flower pot with some soil over it and other 5 seeds were again kept in wet cotton to see if it germinates. By after noon ants had lifted one seed from this, by seeing this I scattered some sugar for them so that they don't disturb the seeds. 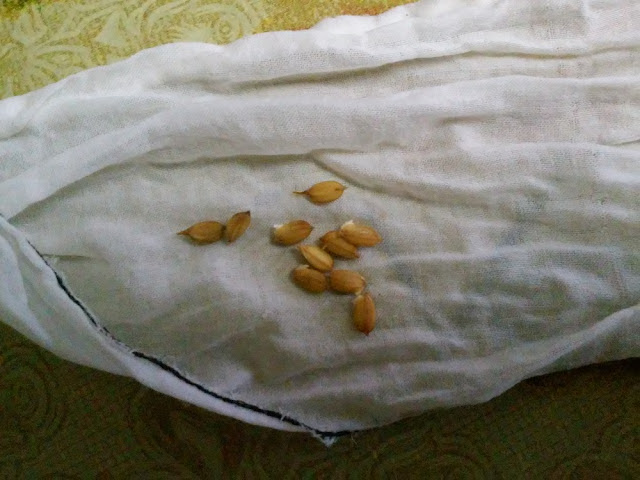 After first batch, I put 25 seeds in wet cotton and most of it germinated by 3rd day. I put all of them in a separate flower pot and scattered some soils over it watered it. To my surprise next day, all seeds were taken by ants. It looks like water was less and they could easily lift soil particles and take away the seeds. I had scattered some sugar also, but this didn't help.

Today I put another 10 seeds in cowdung seed ball and put them in a grow bag and watered it nicely. By after noon all seeds were safe..to be seen what happens now. If one scheme fails, we should have some back up for a different trial. 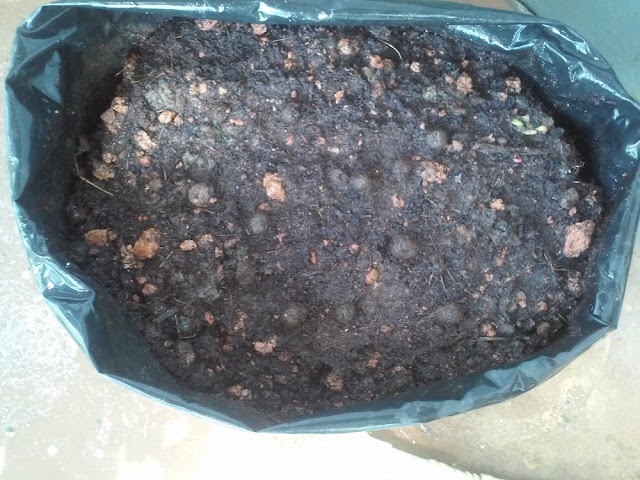 3 seedlings coming in a flower pot and a few were transplanted to a raised bed. Applied cowdung slurry couple of times and mulched with leaves and all has become part of soil now. 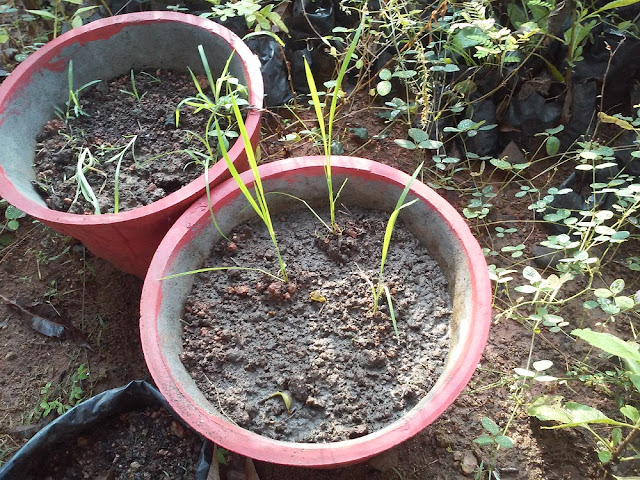 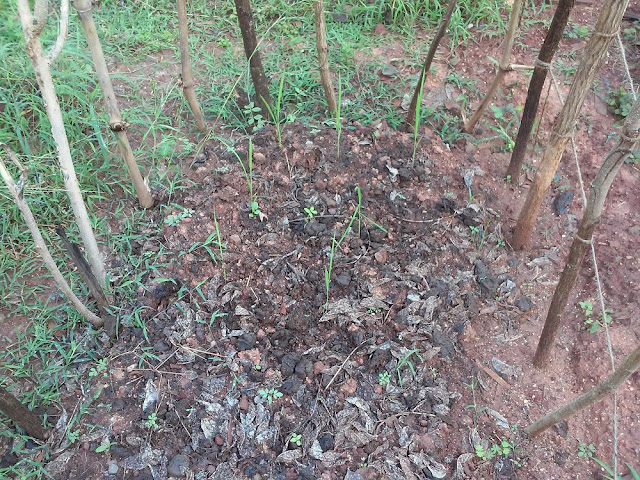 Some Arachis Pintoi cuttings are planted here along with rice...they are slowly coming up. 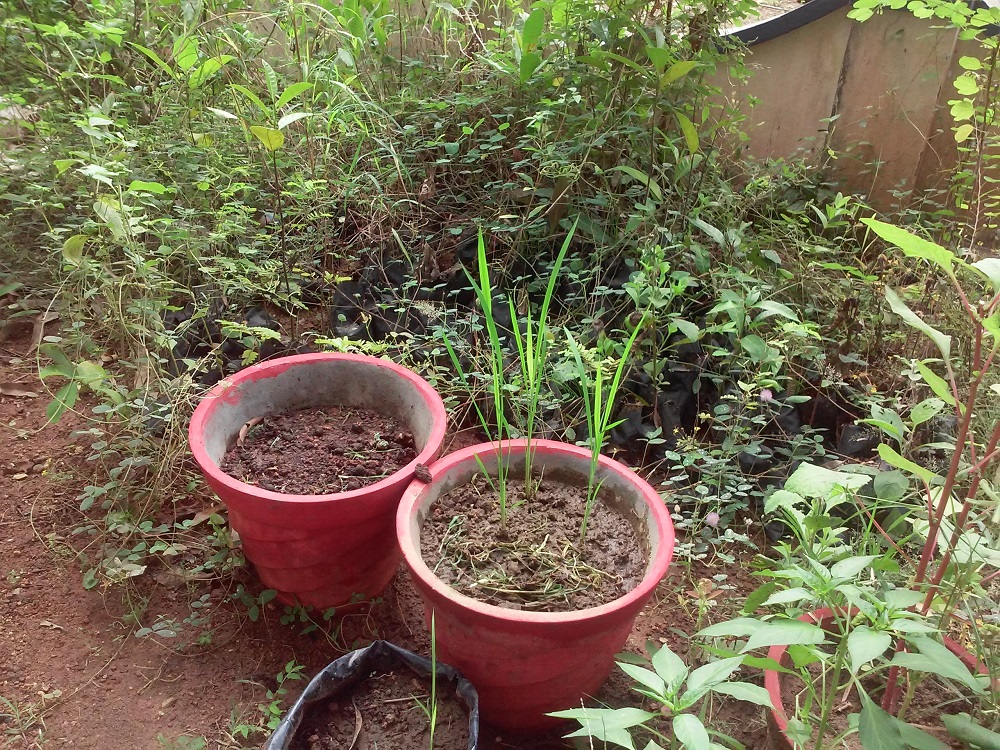 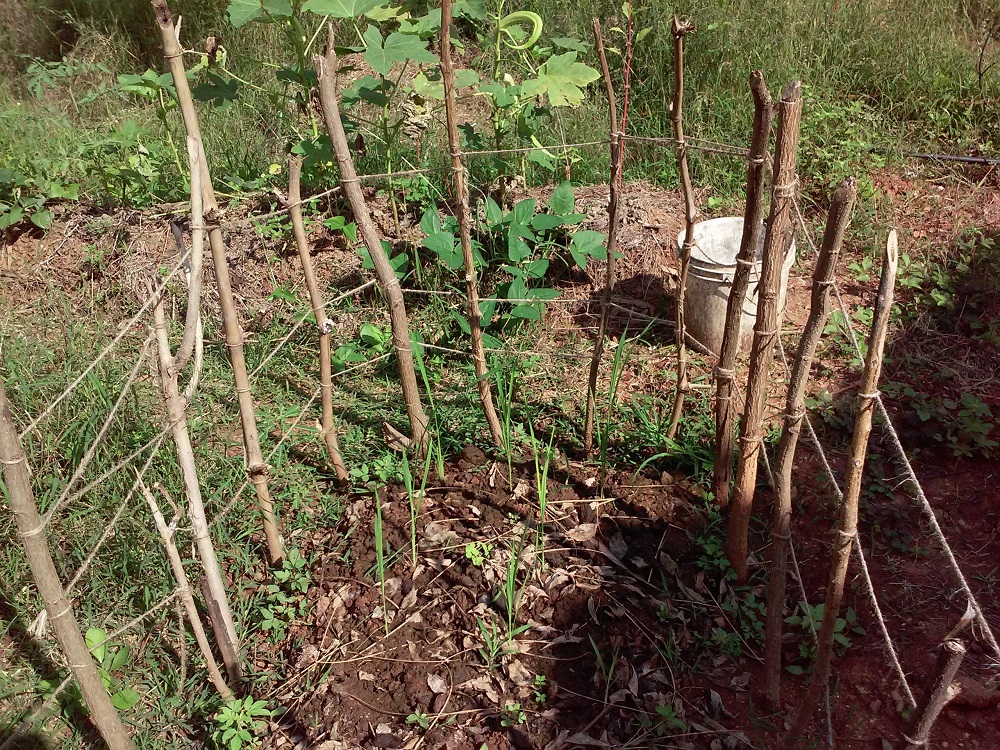 It started flowering...so early...plants are not so healthy even after mulching and applying cowdung slurry multiple times... 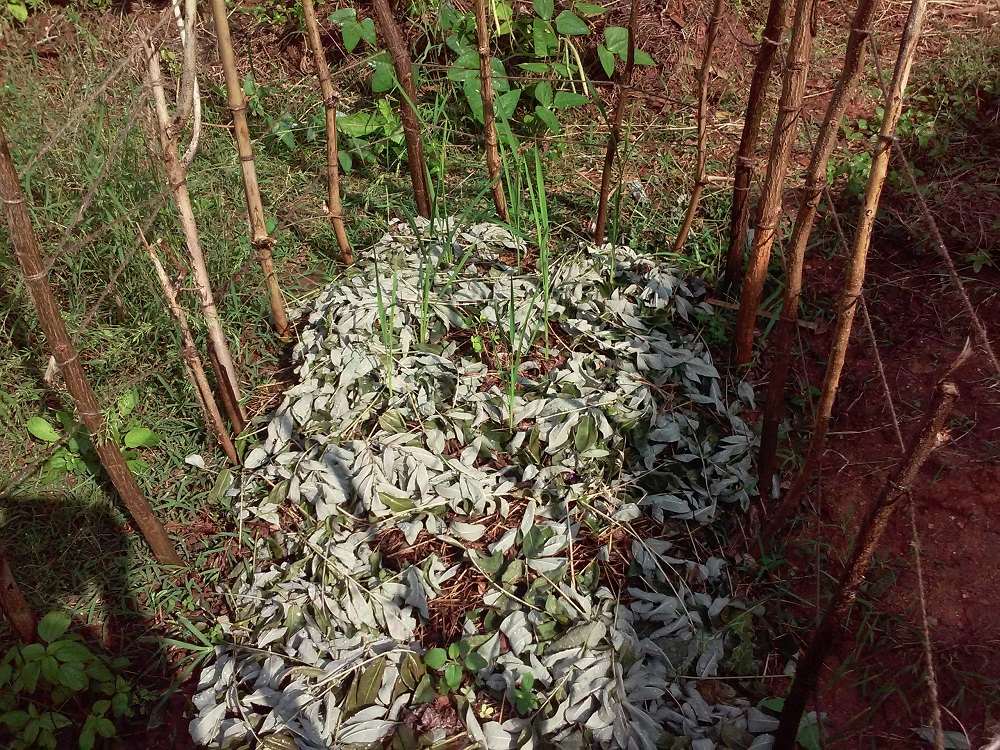 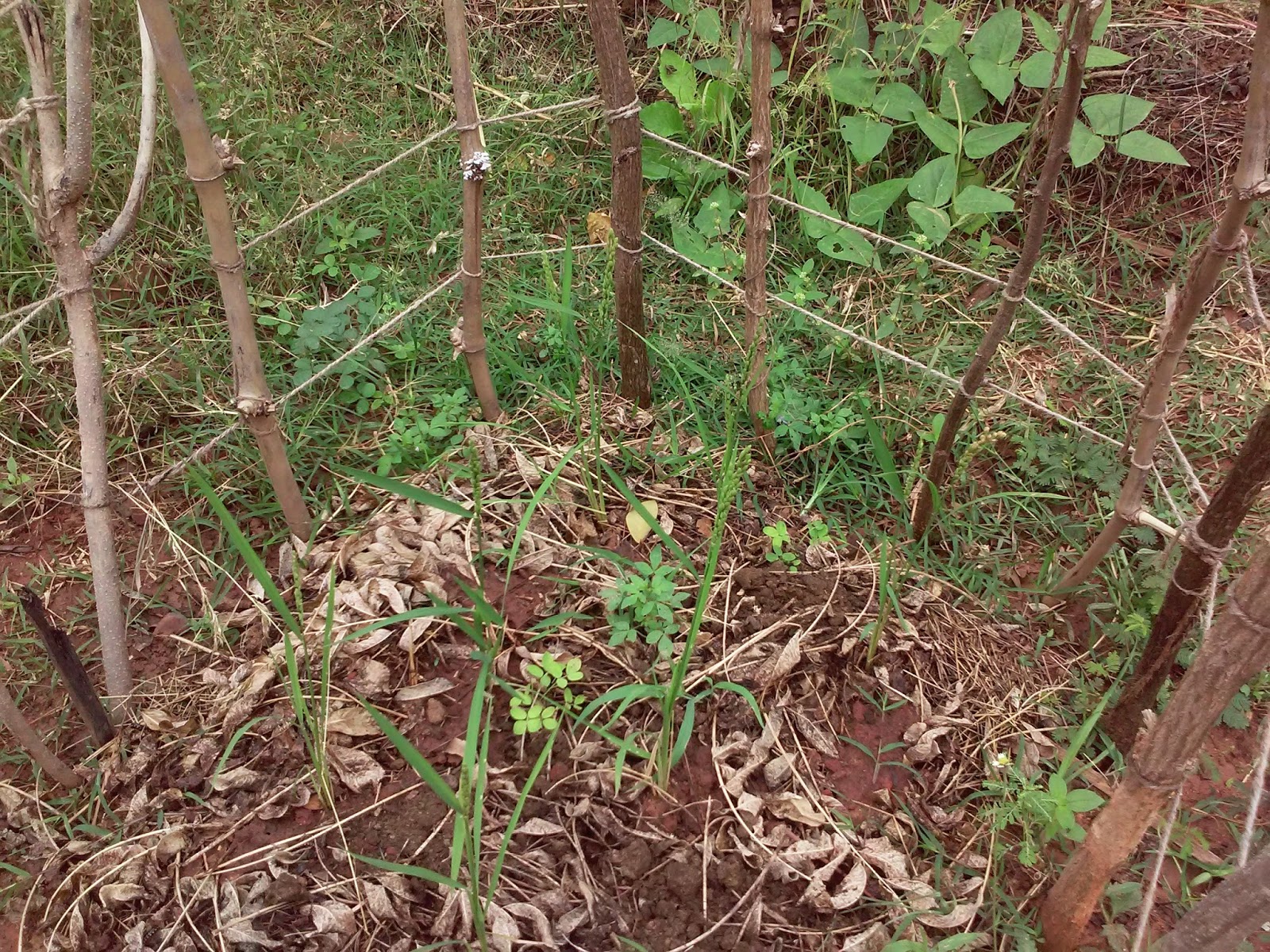 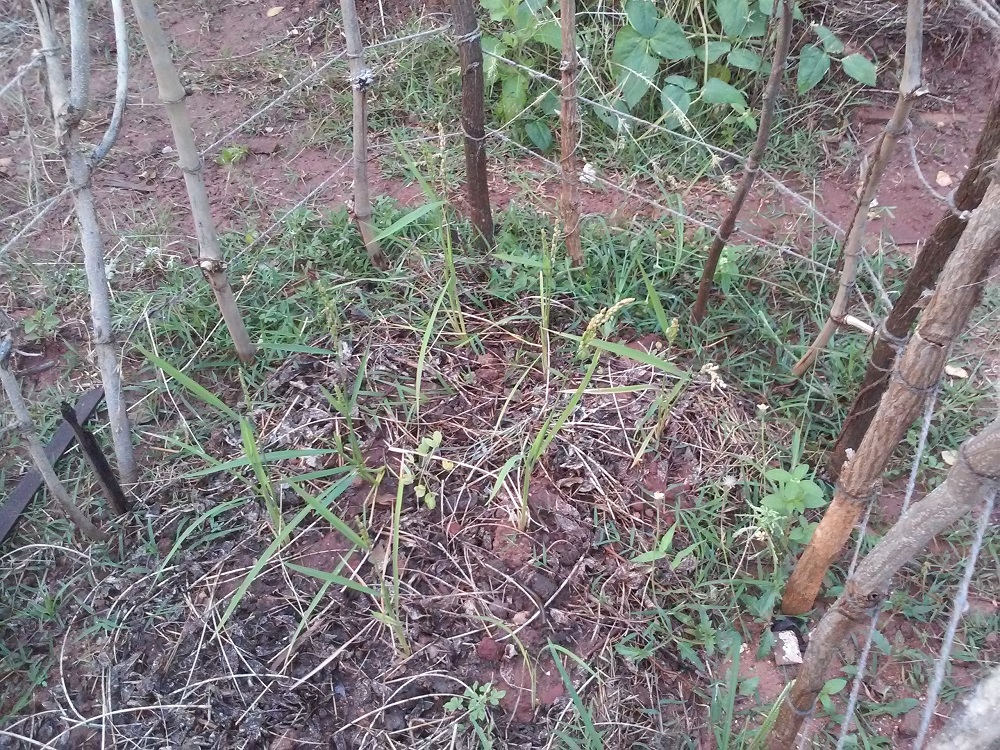 Even though yield was not good, some seeds are got, enough for next season's planting and multiplication. Meanwhile didn't hear from anyone to whom I had sent the seeds !!! Hope some more happy hill seedlings are growing some where !!! 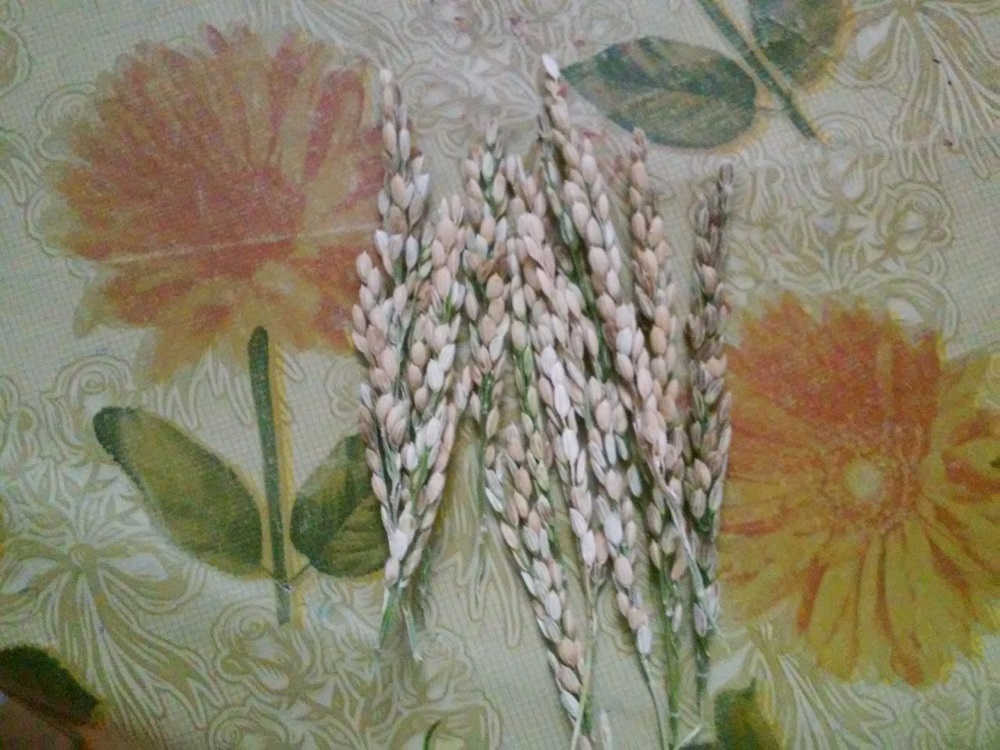 I had planted Pureria Javanica in banana area as an extreme step to control grass. Issue with this cover crop is that it climbs on to all the plants and completely cover it. But pleased to see that grass has receded in that area. If you can cut and control it periodically then it is OK. In my case, I cut it once in 3 months or so, and by this time, it climbs on every where. 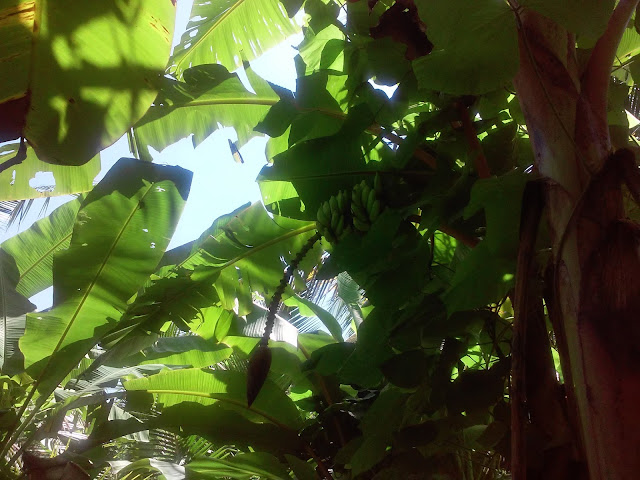 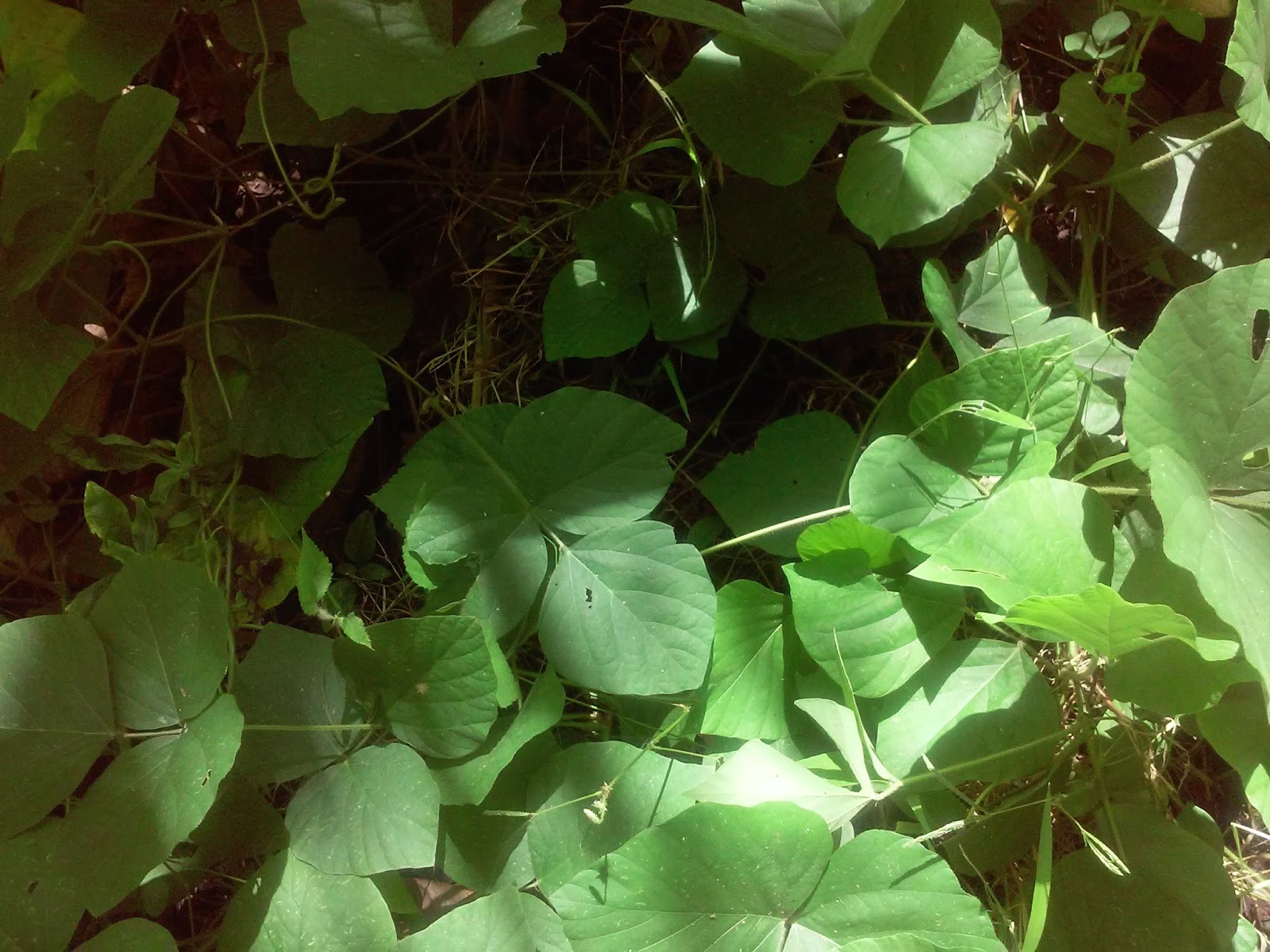 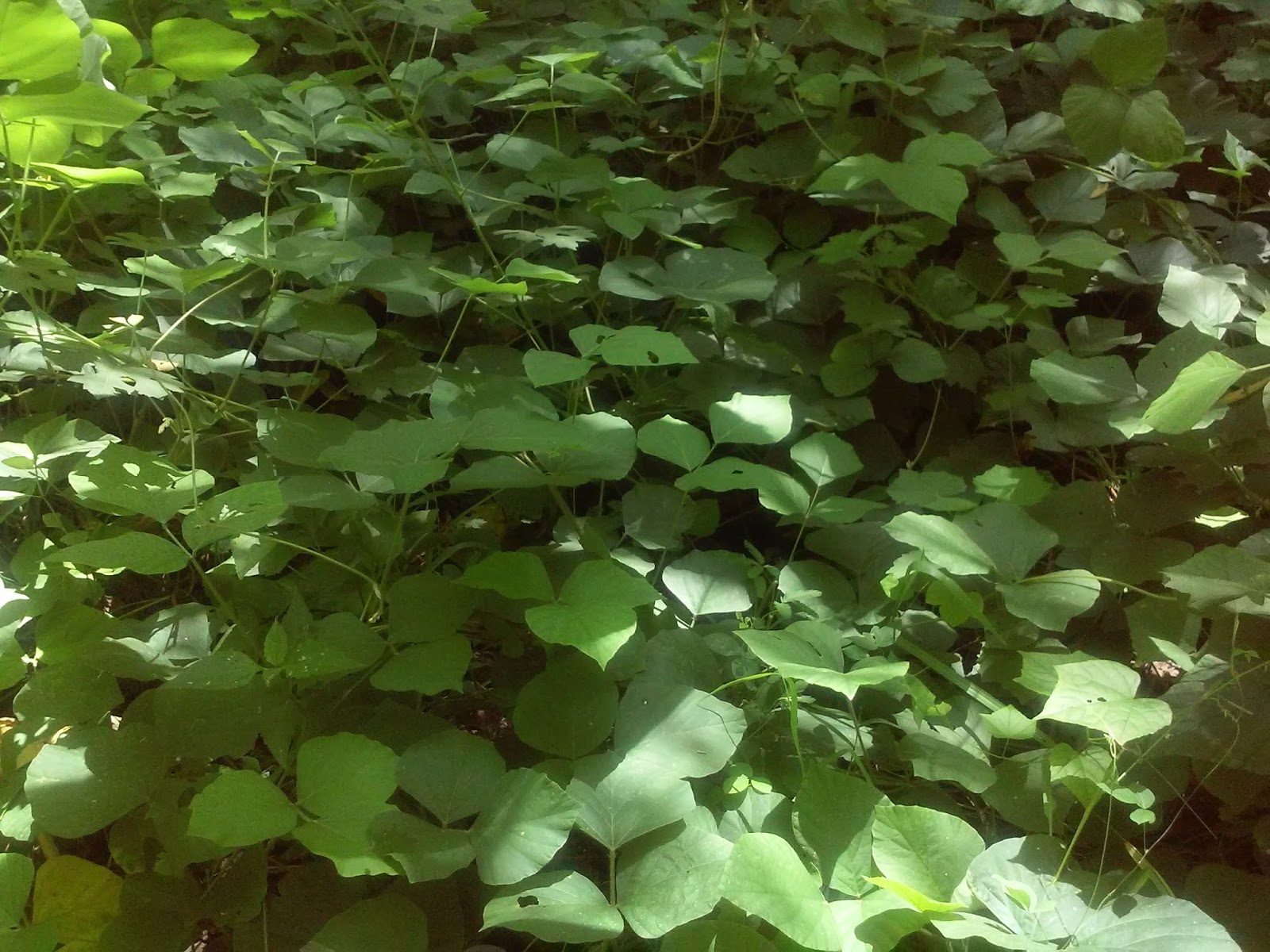 Transplanted some papaya saplings in 2014 october season and now they have fruits. Earlier had tried transplanting small saplings, but they never survived. It looks like even without any manuring they grow quite well in natural farming conditions. 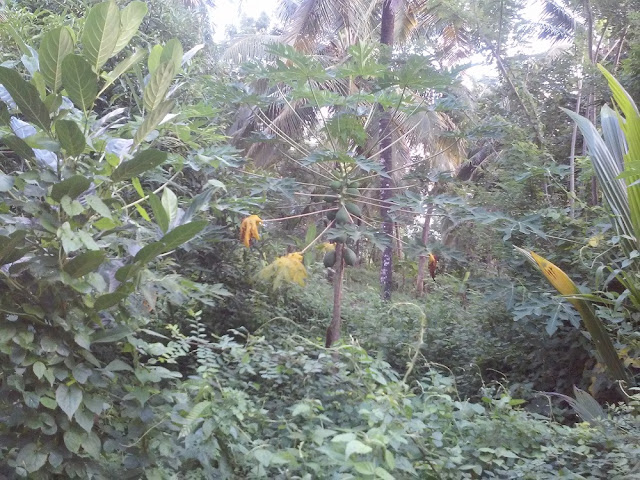 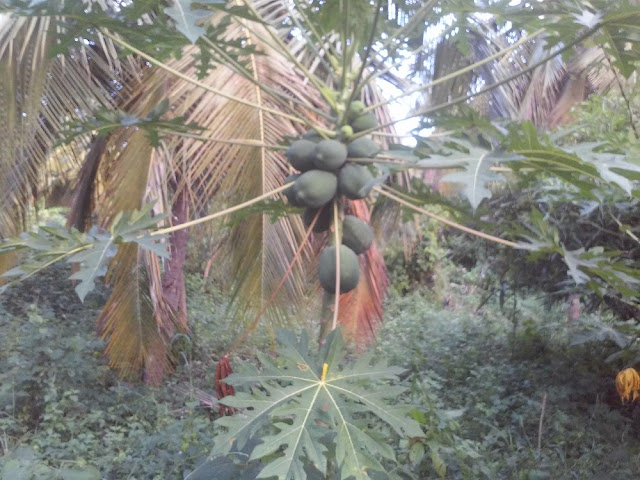 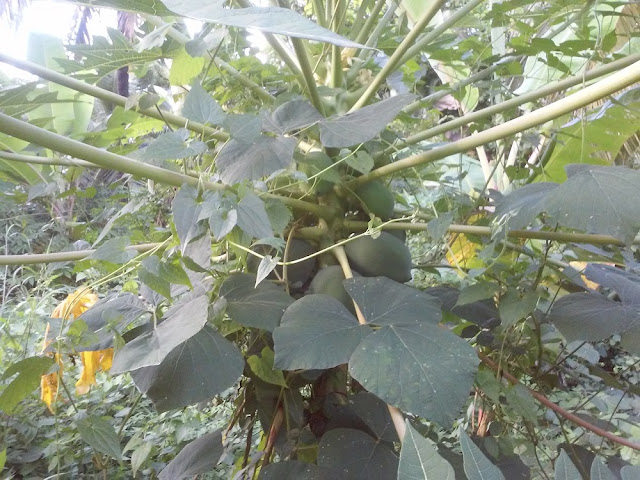 Inspired from good performance of pappaya,planted more saplings this time, hope they will survive summer....Saplings were grown at home... 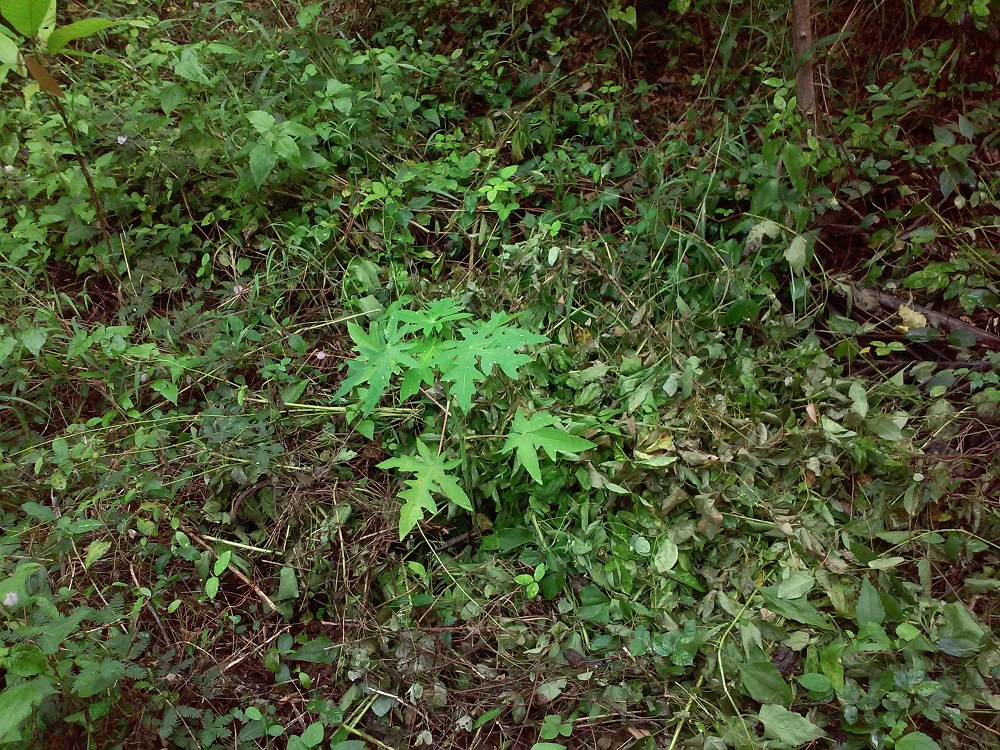 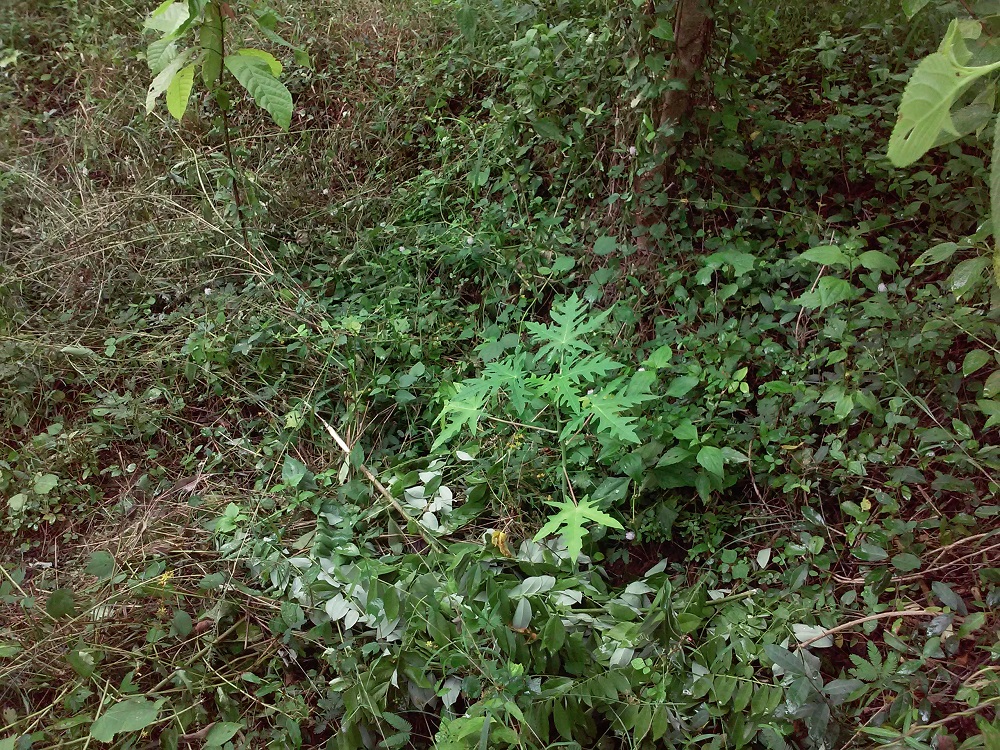 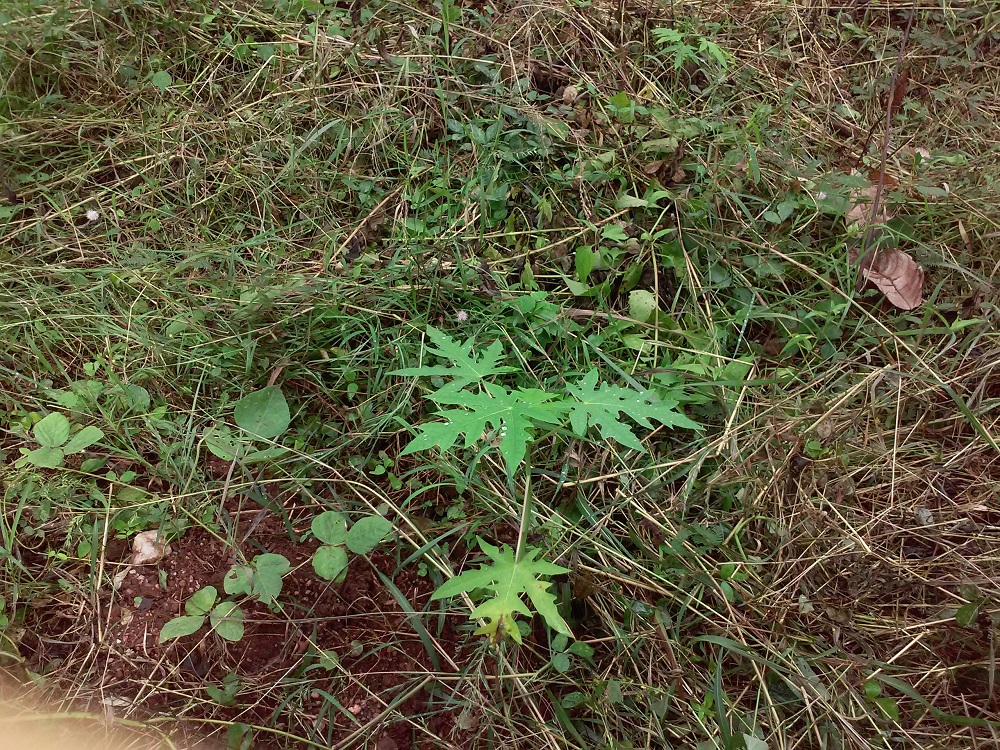 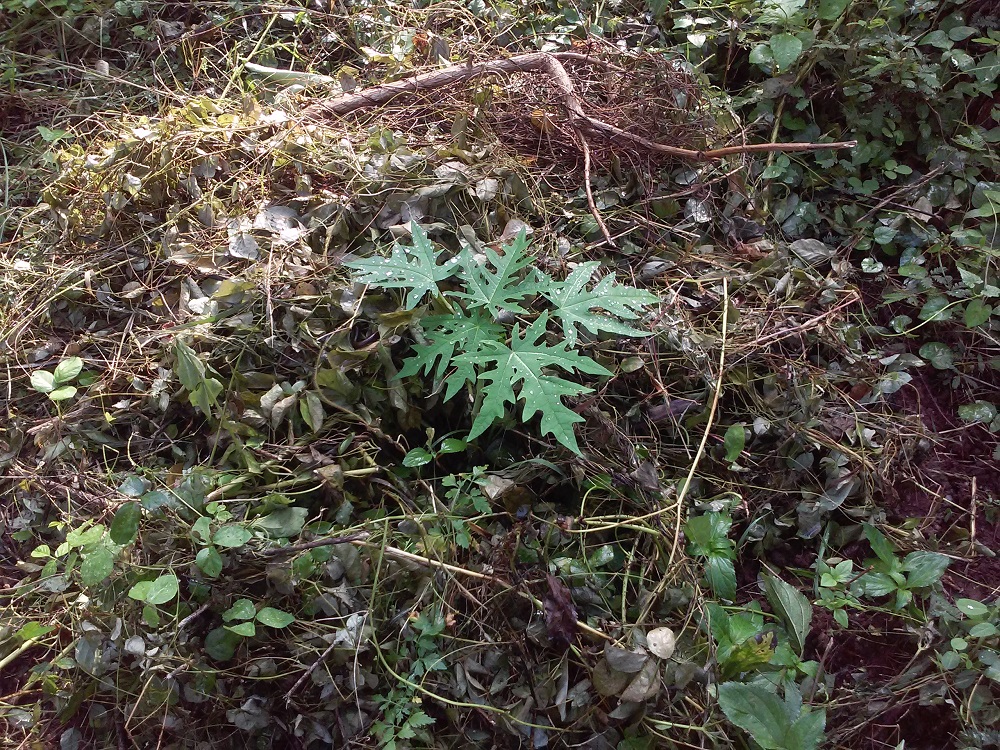 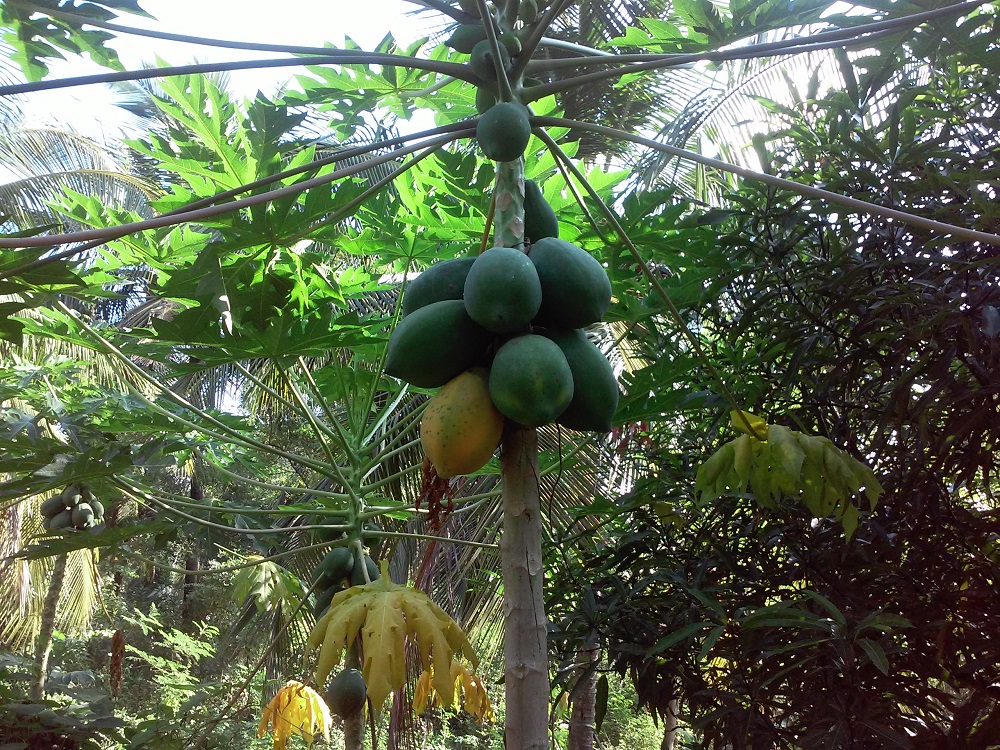 Posted by Nandakumar at 6:27 AM No comments:

Access road to farm is getting tarred..I love the mud roads ...even though on rainy season it makes life a bit difficult, but it was beautiful to see the road in different climates..Just some snaps to keep it in memory 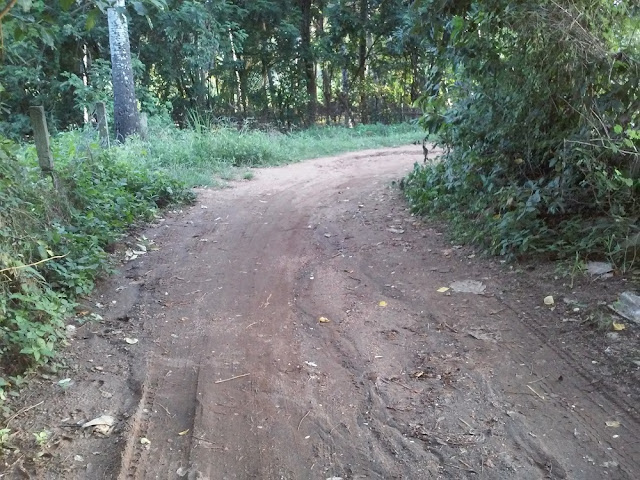 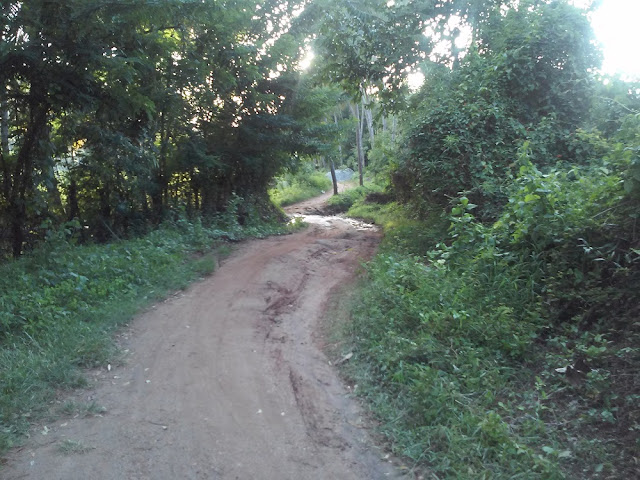 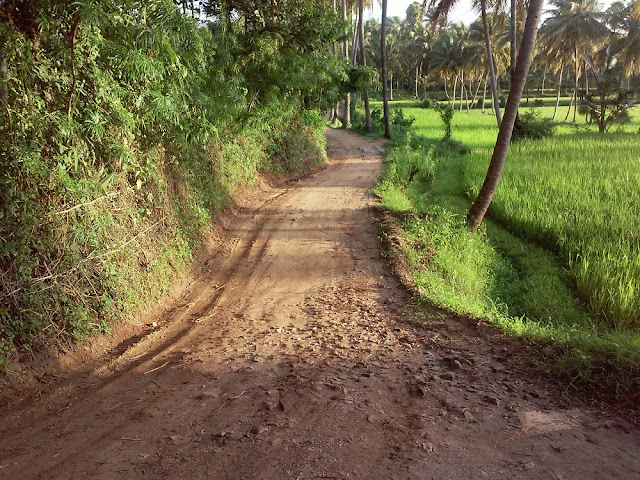 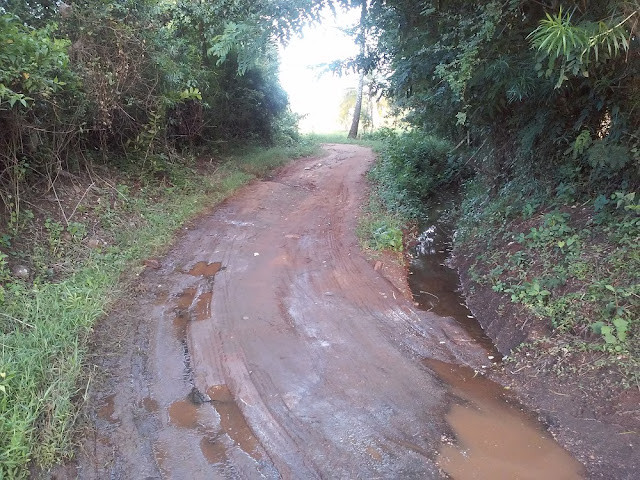 Posted by Nandakumar at 8:30 AM No comments:

Recently a friend told me about using ducklings to grow paddy, releasing them to field after transplanting so that they control weeds, aerate and fertilize soil. Some where in the internet found some references of using ducks as tractors also.

On a bicycle trip around gave me a feel of how ducks could be used as a tractor. In the paddy fields around, first crop harvest is being done and duck farmers from Tamilnadu brings ducks in large numbers and leave them on the paddy fields. The fallen paddy seeds and small creatures will be their feast.

The field after 3-4 days of ploughing work done by ducks. For me, it felt like a perfect field for transplanting, except some areas, still some more ploughing to be done. 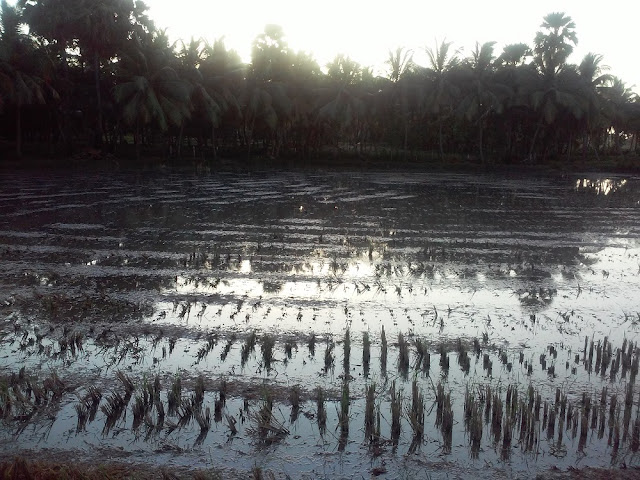 Field after 3-4 days of ploughing.. 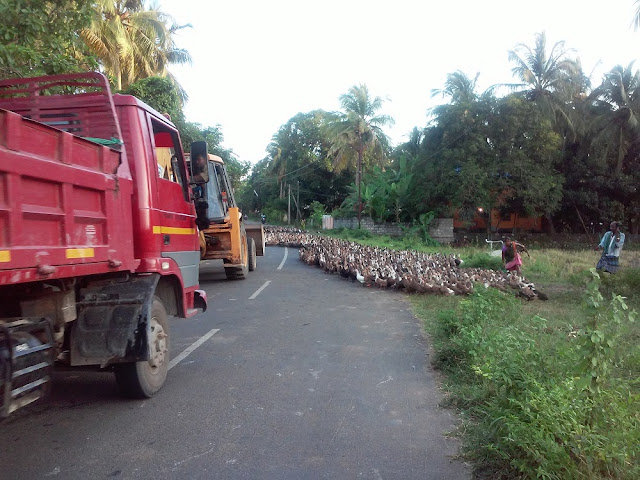 ducks being taken to their night shelter....

As I see this, rice cultivation can be done quite easily using ducks as tractors and also using duckling later for weeding which is one of the major critical task. But all these can be managed well, when you are a true farmer and takes care of your field staying close to your field and farm. It may be impractical in todays world, but definitely doing such activities will give you immense pleasure.

Giving two reports which came in Trichur and Palakkad news papers. In both cases, farmers could harvest a reasonably good paddy without sowing in that season, fallen seeds from previous harvest germinated with summer rain and it grew well. I felt this is a kind of natural farming, so thought of reporting it.

Trichur
---------
This report can be accessed from the following link http://digitalpaper.mathrubhumi.com/c/6427644

In this case they had used Uma HYV for previous crop and after the crop, they ploughed the field and left for next crop. This year monsoon came very delayed, but there was good summer rain. Hence seedlings which came up with summer rain started growing well with monsoon rain. They didn't bother to deweeding or for applying fertilizer, but rice plants came up well and dominated weeds and established well. As per report Mr.Santhosh (a friend of mine) got a yield of 700kg paddy from 1.5 acre field.

The same thing happened in Chittilenchery of Palakkad. In this case, they deweeded the plot. 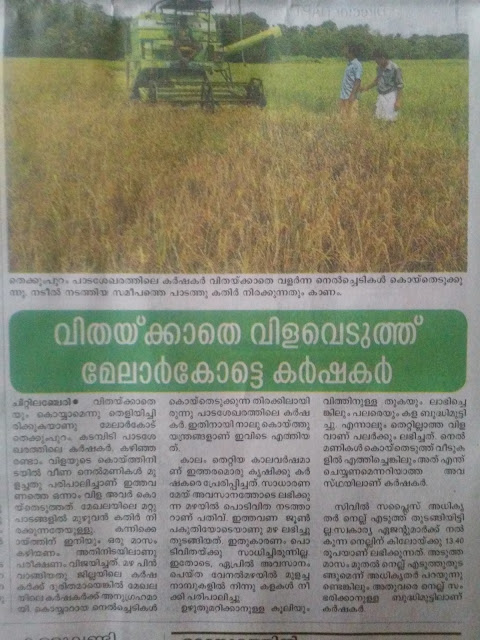 I have plans to use this SRT method with heavy mulching so that weed control can be done manually with minimal effort. With heavy mulching, weeds will be less and what ever comes can be easily pulled out, but to some extend mulch will interfere with weeding. Another option is to use a proper cover crop so that weed can be controlled.

More details can be seen in the link.

Another blog where SRT is referred..

Posted by Nandakumar at 11:44 PM No comments: