These are not great discoveries, but minor observations while doing hands on farming which is part of my learning.

Today I was weeding my rice field. Once the weeds take over the field it is not easy to control them, I just want to make sure that they don't block sunlight to the rice plants, I don't have any objection in weeds coming in rice field. But the weeds were growing above the rice in some places. Weeds are so adjusted with their environment that they come back and outgrow the rice. The weeds are growing in the same field for years and they are well adjusted to the environment, but rice is a first timer and struggles. But the variety which I cultivate this time do much better and  has reached a height of 3 feets.

So I am in constant lookout for solutions on how to compete with grass.In the middle of the grass, there was a finger millet plant standing like a solution. Last year I had cultivated finger millet in that area and some seeds would have fallen and couple of plants had come out. All the three plants I saw had grown taller than the grass and that also with the same time as the rice, both would have germinated at the same time. It looks like, the rate of growth of finger millet is greater than grass and the rice plants. It had reached close to 3.5 feets and was standing high among the weeds. It may be too early to conclude, but the growth of this finger millet is promising and gives an option to compete with grass. There is so much unpredictability in the agriculture, so with my limited experience if I can replicate the same thing again...that is all the finger millet plants can outgrow the weeds...Here are some photos.... 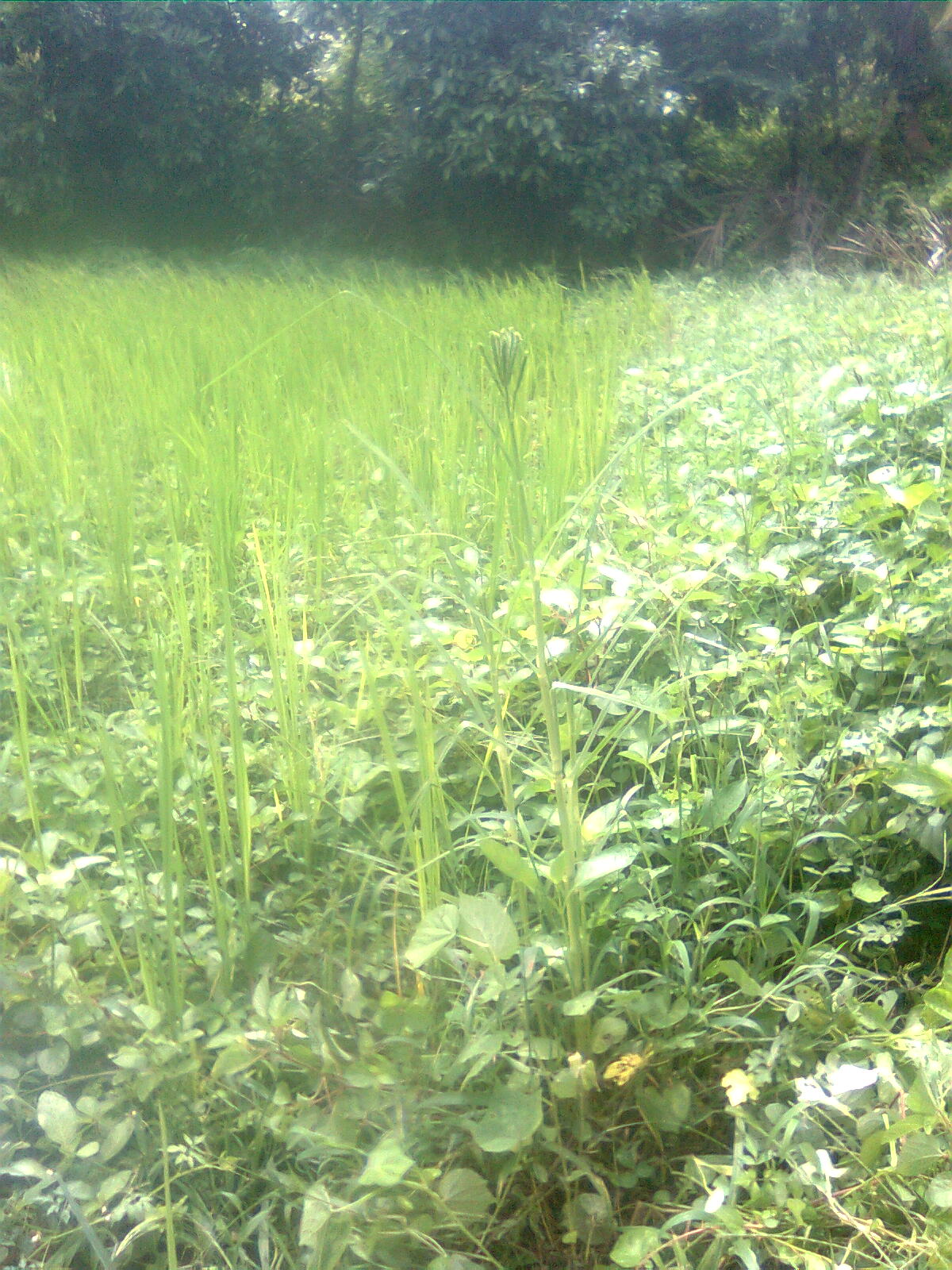 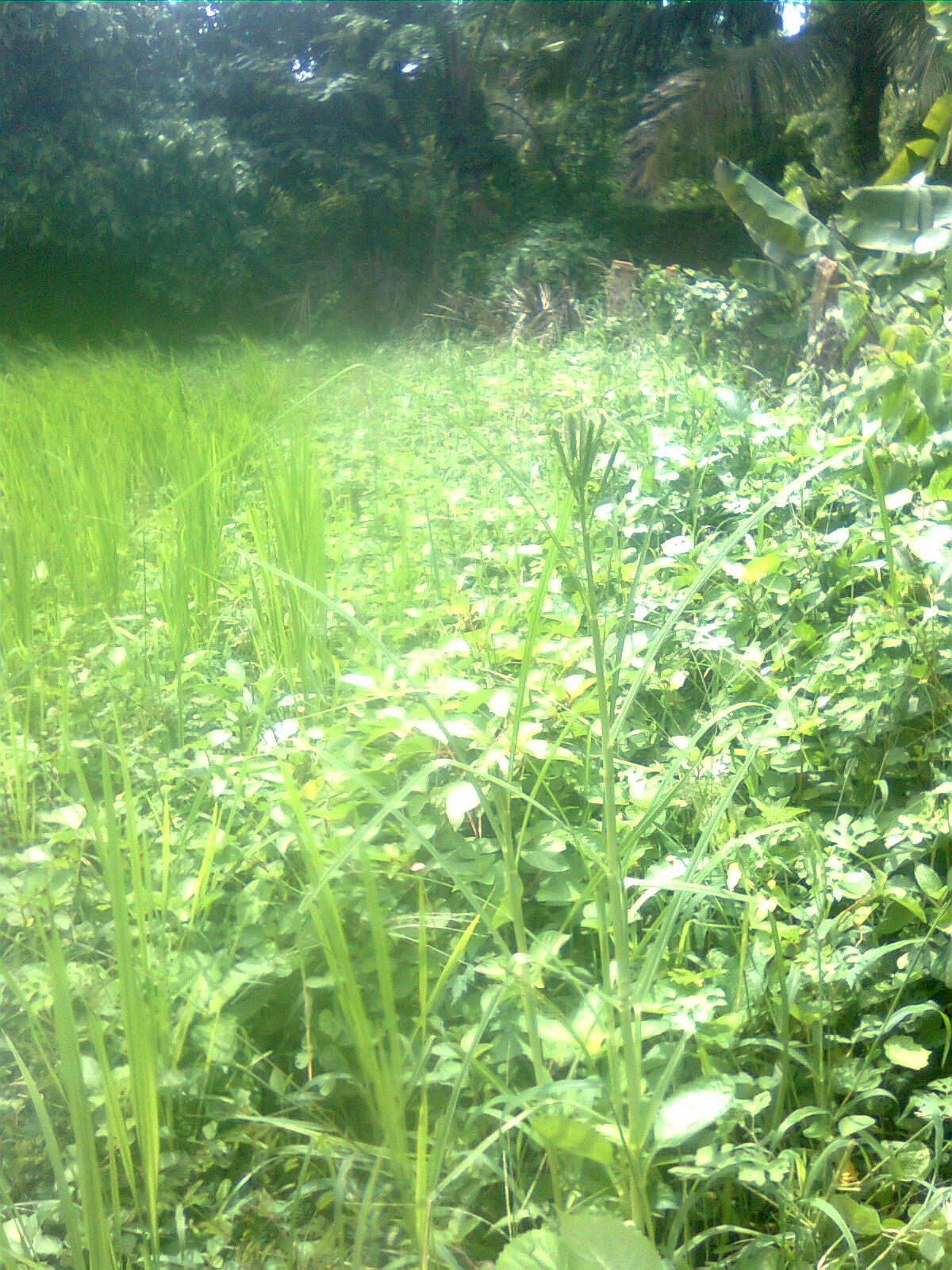 I had got some seeds of happy hill rice which Fukuoka San had developed in his field.
Fukuoka had invented and registered three varieties of rice.

There are not much information available on this, but it is said to have wild strains in it. In this interview 'My natural way of farming is the sensible one'' by Vithal C Nadkarni
(https://groups.google.com/forum/#!topic/soc.culture.indian/G_xO_gPRBBc) Fukuoka says "It's called "Happy Hill" after my surname. The mother stock of this noble rice came from Assam and the father stock from Japan. It took me eight years to get this rice to yield. It's the world's most productive strain of rice, providing on an average more than 200 grains per pod, which is twice that of normal yields in Japan".
24-December-2020
Some information about happy hill rice from a Japanese website which sells these seeds
https://noguchiseed.com/hanbai/products/detail/158
Happy Hill (Uruchi)
Immediately after the end of the war, Masanobu Fukuoka fixed it in 1986 by crossing a long culm multi-grain mochi variety brought back from the hinterland of Burma by a Japanese Hoju type variety.
Super high-yielding rice cultivated by the late Masanobu Fukuoka, a charismatic natural farmer. The grass is upright and resembles foxtail millet. Delicious for a high harvest. However, since it is late-maturing, it is not suitable for cold regions such as Hokkaido and Tohoku where winter is early. Suitable for west of Kanto. It is said to be suitable not only for paddy fields but also for land fields. * Note: This variety is prone to rice scab, so it is not suitable for commercial cultivation for shipping. Please note that.
Rice rice. For this species, Isao Noguchi, who was invited to Ehime at the Centennial of Masanobu Fukuoka's birth, proliferated the seed paddy received from his bereaved family by the Noguchi seedling staff. The name of Happy Hill is a literal translation of "Fukuoka".
Strong culm and strong against lodging. It has strong drought resistance, and some are close to upland rice. Strong against weeds. It is suitable for no-tillage, fertilizer-free, and pesticide-free natural cultivation because it exhibits its characteristics in fields with poor conditions. When cultivated with high fertilizer, the yield is extremely high and it is possible to reach 10a1t or more. (300-400 seeds per ear grow, and 200-250 seeds grow on average. (Keep the number of stems per square meter at 200-300). Since many late-maturing species grow into large stocks, 40-45 cm between rows and stocks. It is best to plant one or two plants at the same position. It can be cultivated at intervals of 30 cm, even with 3 to 4 plants.
Seed life at room temperature, it is as short as one year. It can be stored in a cool and dark place for several years.
Dormancy is absent. (Therefore, it may germinate in the rain during fruiting)
Some seeds were sent by one Japanese friend who had been cultivating this for some time. He had told that the seeds are weak, because of bad weather.

I was in a dilemma initially how to go about cultivating this precious seeds. So shared it with other three friends who were interested in Fukuoka natural farming. Initially I was thinking to put it in some flower pots, so that I can take care of it more. But during my absence, we were sure our dog will take care of it, so dropped that plan. I made some small fencing in the front yard using glyericedia sticks and then put the seeds after making a small raised bed and also put some dried cow dung. Since the seed quantity was less, and since the Japanese friend had told that the seeds were weak, I wanted to give some boosting to the seeds. The germination was poor, and plants looked weak at the beginning. Grass started coming, but being in the front yard, I could pull out and mulch with them as and when required. I also put some fresh cow dung slurry couple of times and at a later point, put horse gram also. But horse gram was growing thick, so finally had to pull out and mulch  with them.

Even though initially it was weak, it was better at the later stages. Couple of saplings didn't survive. But to my surprise it started flowering on 52nd day (less than 2 months). Also there were no tillers seen, so this looks to be the fast growing variety and this matches with the description which my Japanese friend had given, it reaches a height of 20 inches.

Here are some photos...Actually I had created a raised bed, may be for rice, it may be better to have bunds on 4 sides and keep it little low and allow some water to be there. In Natural Farming book, Fukuoka san explains that during heading stage, there should be more water for rice. I will be continuing with my experiments, in the next season with the improvements. But I am still looking for the variety Fukuoka 2 gou which grows tall and also has more grains on it. Now there is a threat of birds, rats, but I hope my dog Bruno will take care of chasing them away !!!. 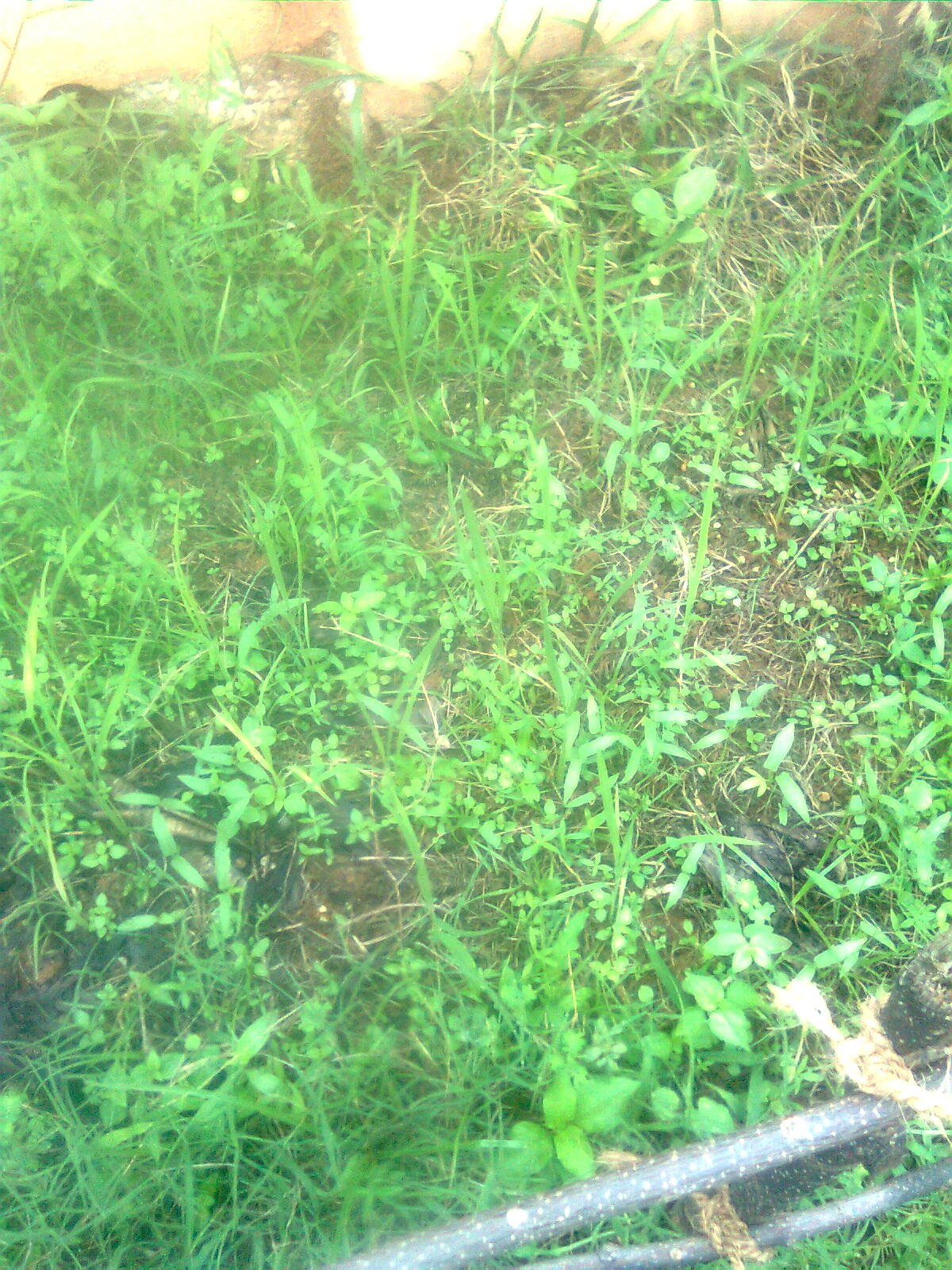 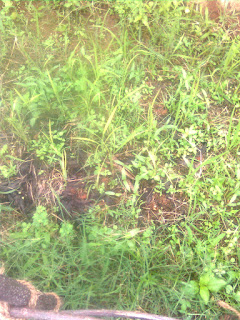 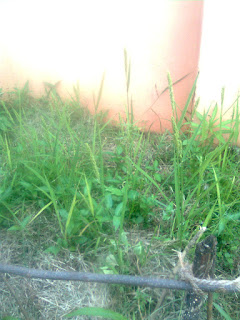 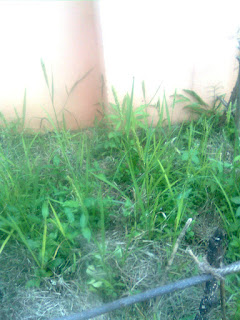 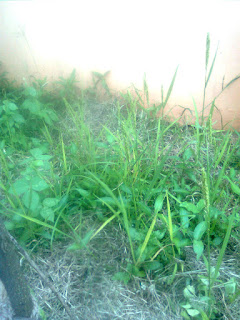 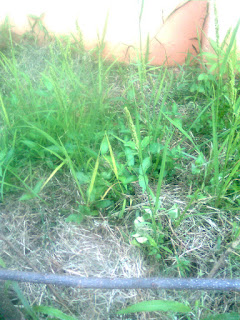 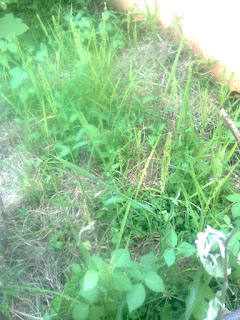 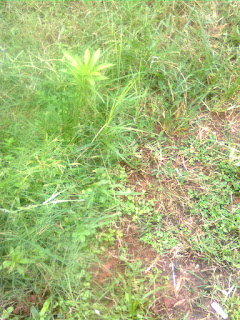 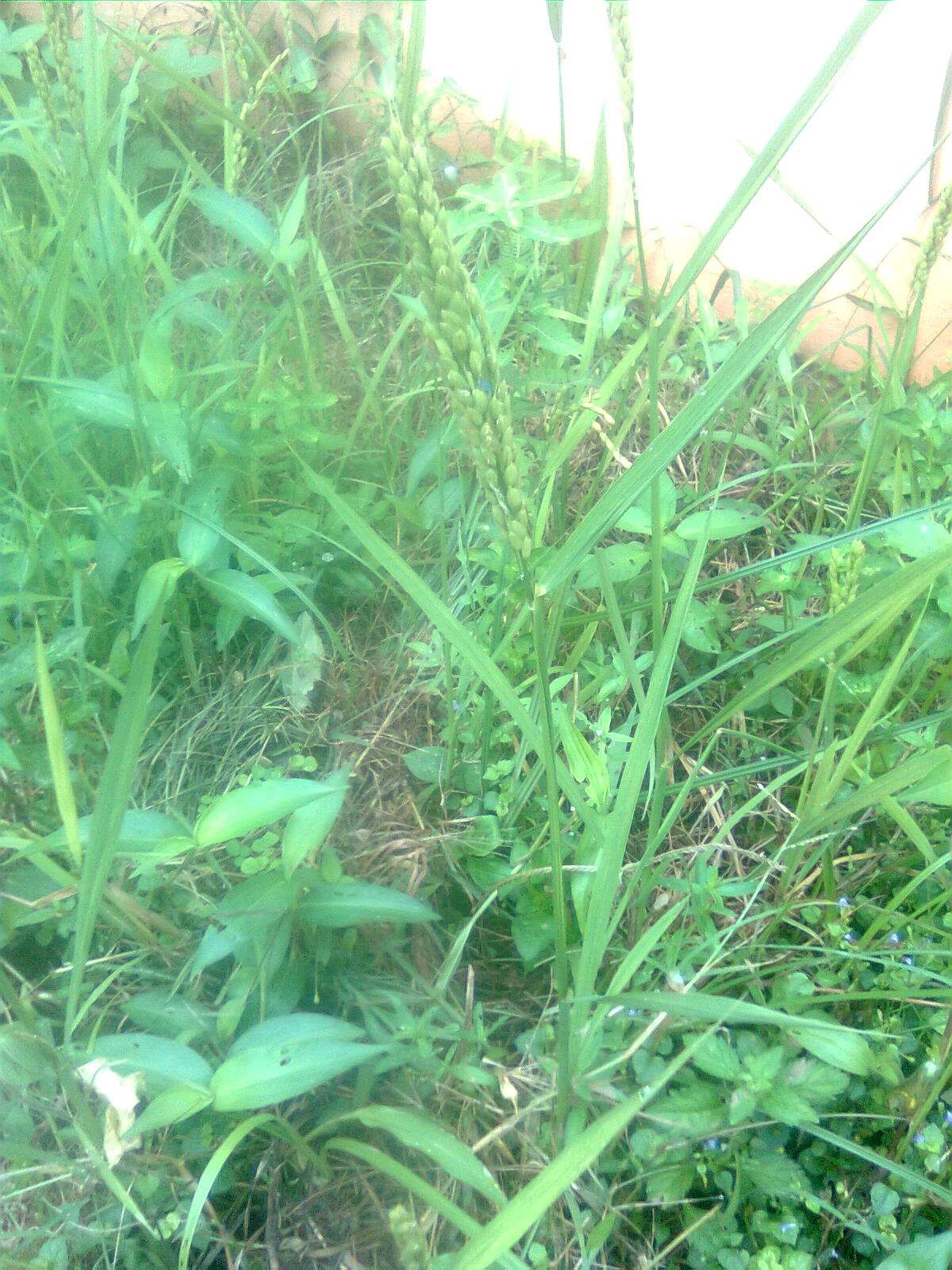 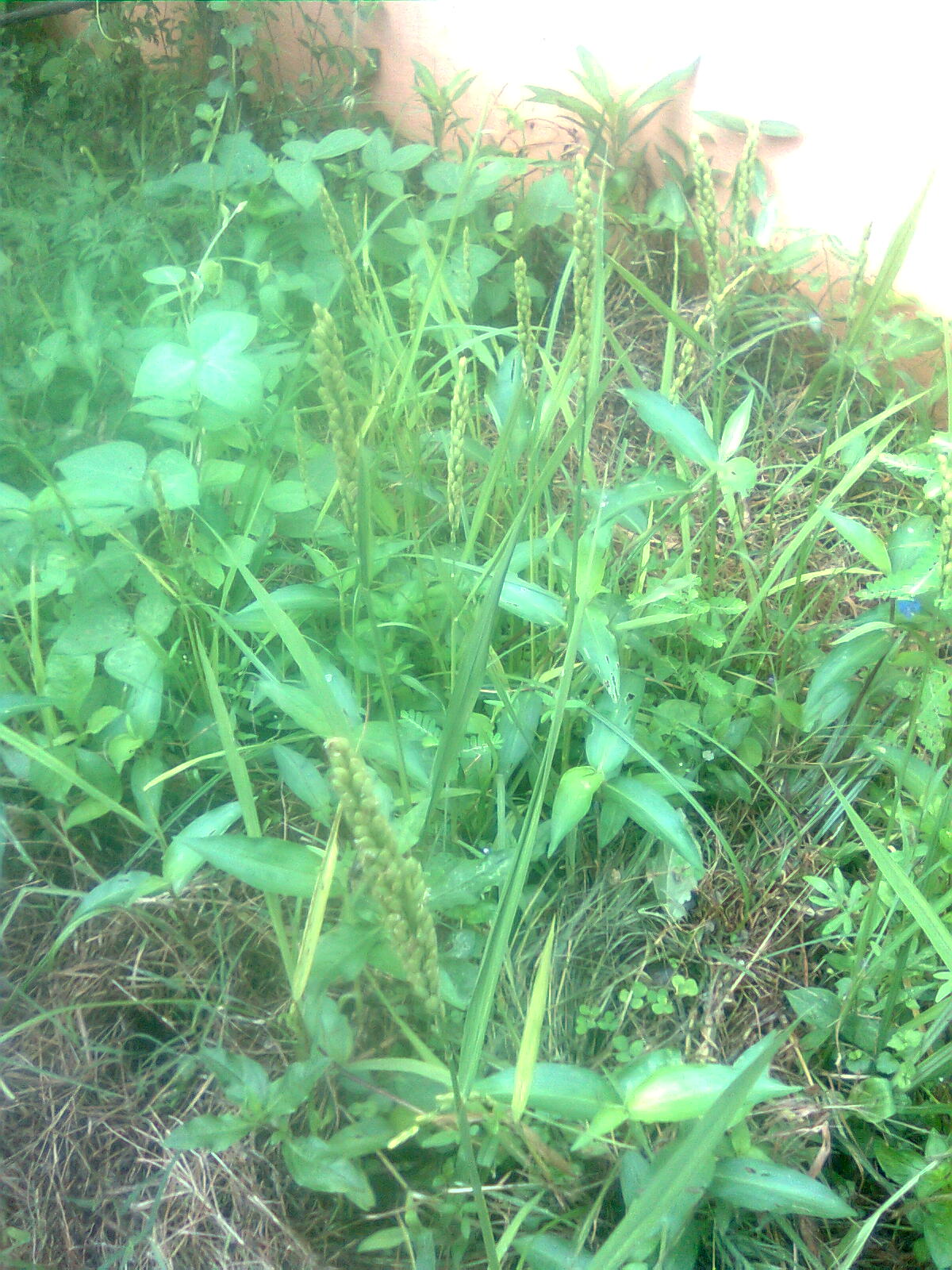 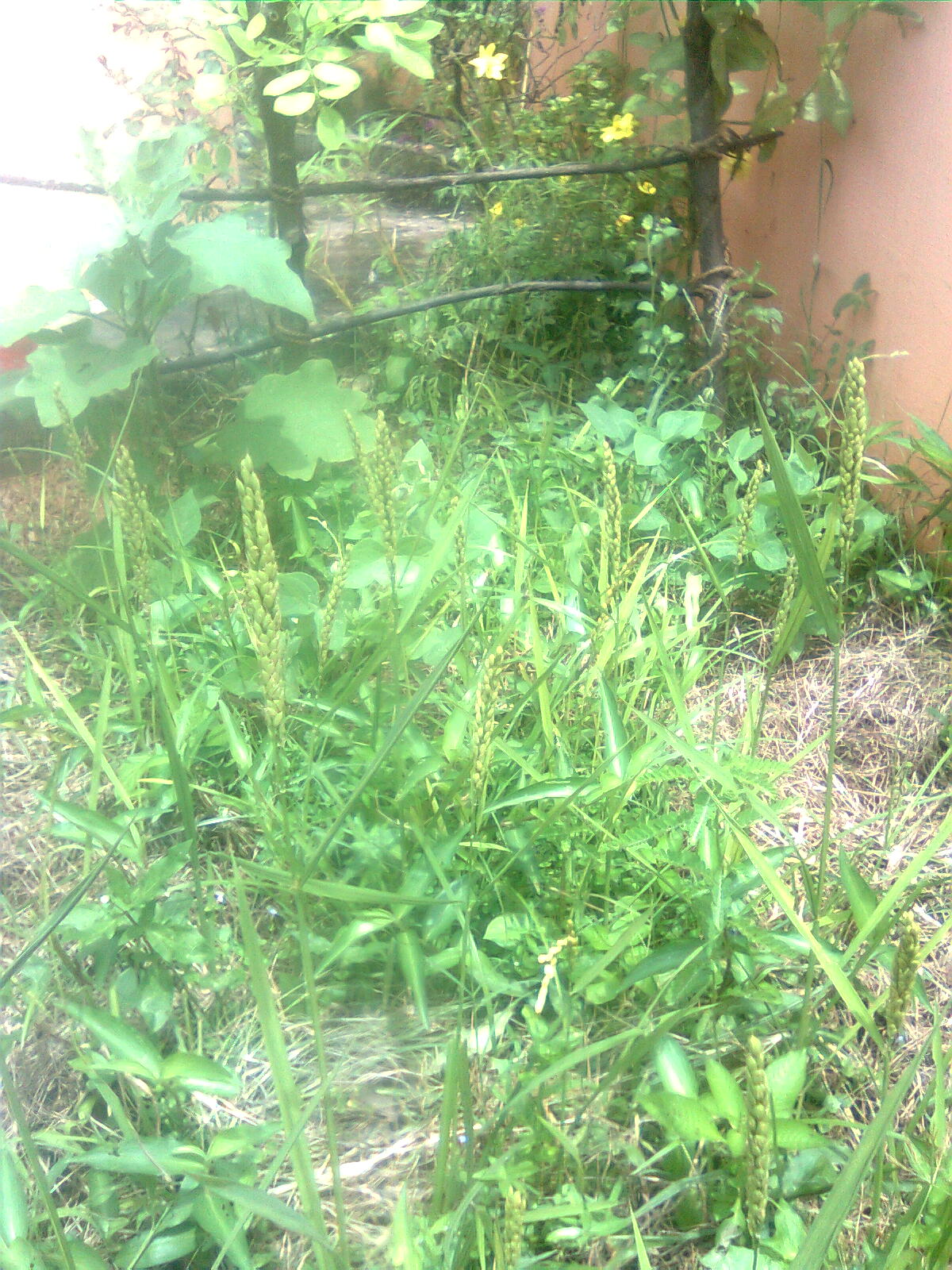 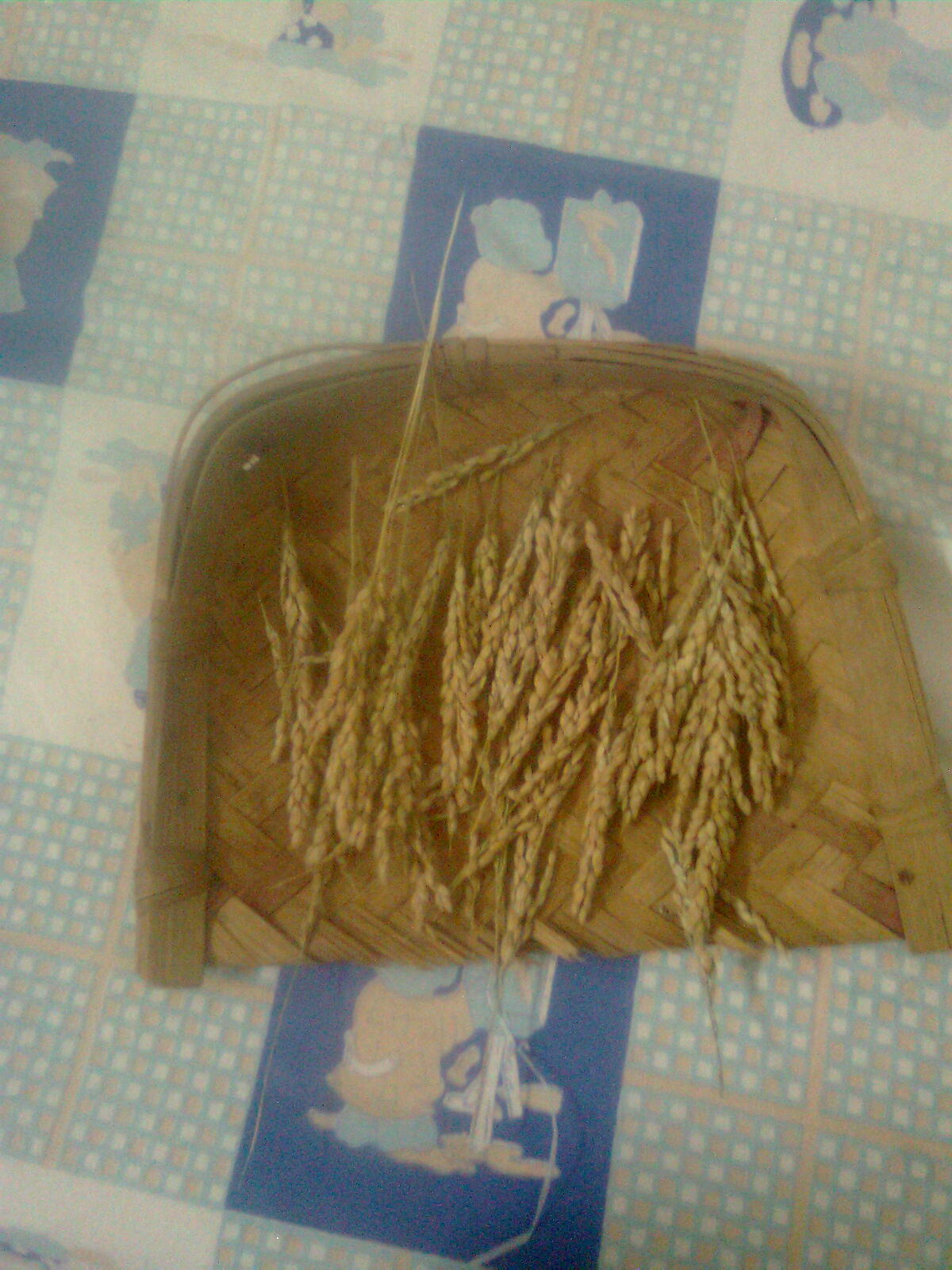 Masanobu Fukuoka wrote 'One Straw Revolution' is written after long years of research and hence each sentence contains lot of wisdom. In the chapter 'Farming Among Weeds' there is a sentence which says...


In making the transition to this kind of farming, some weeding,
composting or pruning may be necessary at first, but these measures
should be gradually reduced each year. Ultimately, it is not the growing
technique which is the most important factor, but rather the state of mind
of the farmer.

When I started banana cultivation, I thought after planting the suckers, just cutting and mulching with grass around will give good yield. But the plants didn't show any growth at all. Developing cover crop with cow pea didn't show any success.

Later I came to observe that, farmers apply cow dung, chicken manure etc at the base of banana while planting itself and it has real effect on the growth. I felt Fukuoka also supports this at the initial stages , weeding, composting etc are required at the beginning, but later after establishing cover crops, and also after many cycles of legume cultivation, applying manure can be avoided since by the time fertility of soil would have improved and just mulching with plant waste should be good enough. Especially in Banana, the trunk, leaves etc provides lot of mulching material.

This is about Cheruvayal Raman from Wayanad, Kerala who conserves 33 varieties of traditional paddy varieties. This story came in Kerala Karshakan, Karshakan and I had met him and also talked to him couple of times, not visited his farm yet.


There were 120 varieties cultivated in Wayanad earlier, after green revolution farmers changed to a few varieties.

He is 63 years old and cultivates the following 33 varieties paddy in organic way.

31 varieties are cultivated in 5 cents, Jeerakasala in 25 cents and Marathondi in 3 acres. Marathondi is cultivated for own use and for selling which is a tasty rice.

He cultivates all these varieties in organic way, and he says they are resistance to diseases and hence pesticides are not used.