Price of coconut fell from 30 rupees per kg (de-husked coconut with water) to 14 rupees per kg. According to government, this is a temporary situation created by dealers. It is also said palm oil import also has a role to play. Even though production of coconut is less during rainy season, price has reduced. I am not sure who controls this, at least government should be having a say in it?  Labor cost is increasing constantly, cowdung, chicken manure all these costs also increases year by year, still coconut produce cost decreases. The cost coconut will be same as that of 5 years ago, how can the coconut farmer cop up with this?

Politicians are behind vote banks, all are operating out of fear. Government provides good health care and education etc.. But while coming to farm produce procuring, there is a problem !!!

I feel farmer has to take care himself in the given conditions !!! Farmers has to be organised and sell their produce for a decent cost. Also dependency on a single crop has to be reduced. Basically he should grow his food first along with cash crops. Farmer should avoid dependency on fertilizer and seeds and should follow Fukuoka natural farming/organic/zero budget farming methods to increase yield and quality of food. By producing his own food, he can have better health.

Monsoon was delayed badly and all farmers started paddy cultivation late. Seeing this I was also did the same, and finally it got delayed a lot. To be a good farmer, I should do timely operations and this is one area which I require improvement.

I am using a traditional variety rice called 'KunjuKunju' which is of duration 90 days. I put the seed in water and added salt in it so that lighter seeds float. As per one book, salt should be added such that tip of a chicken egg when put in this water, comes to surface. I was not having this much salt, so finally put around 200gms of salt and then put around 3Kgs of seeds on to it. Floating seeds were removed. Seed was later washed in pure water 3-4 times and put it in a jute sack and then piled and kept it for 3 days. Ideally I should have covered it in a cloth so that it would have uniformly germinated. I could see some seeds germinated well while some not.

I put the seeds on bed on July 3rd. My helper put a plastic sheet and put around 2" of mud on it and then put seeds on it. The field was ploughed by tractor couple of days back. Since there was not enough water, it was not leveled well.

Later a walk behind tiller was used and tilled and leveled land once again. If every thing goes well, I will be using SRI method this time. 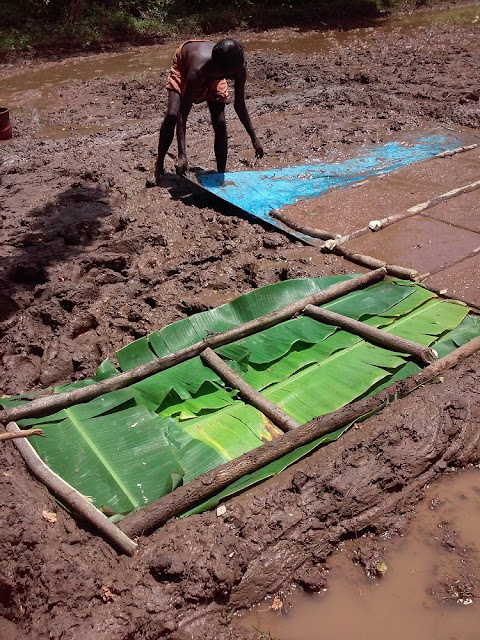 My worker making the field ready for sowing germinated seeds 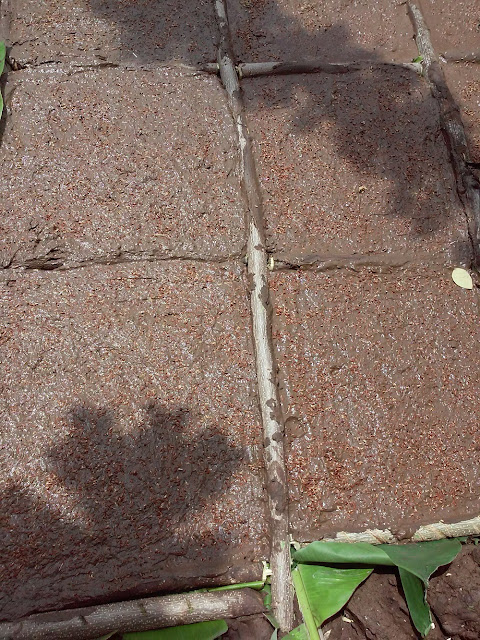 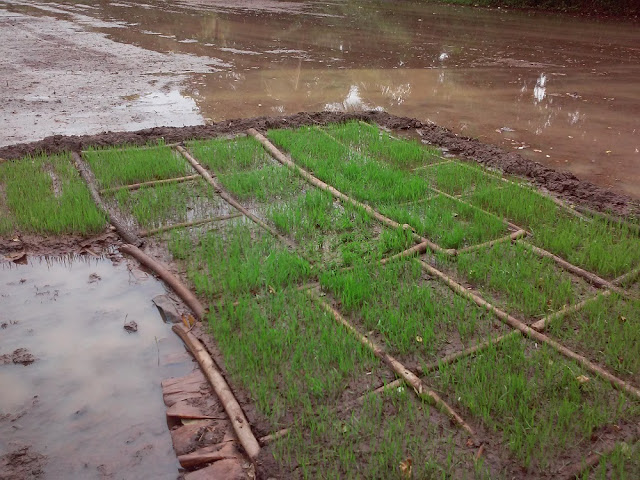 There was some issue with watering, in between rain stopped and filed went dry. So some of the seeds didn't germinate, hence density is not that good. Peacocks scratched some area and some plants were uprooted. 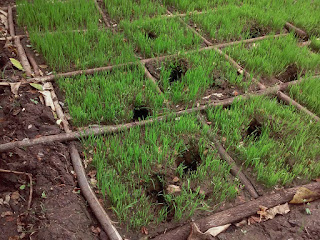 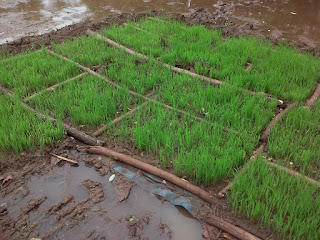 Cows from nearby grazed this area and some plants were trampled...it was not a major damage and plants are recovering. Transplanting delayed, now doing SRI may not be advisable, but not enough plants for close spacing in conventional way. Women workers are busy with other work and I get lowest priority since acreage is less and they have less work with me. One day I tried transplanting and understood how difficult this work is. Walking through puddled field is difficult and planting is back breaking, so left it after couple of rows. It would have been great if natural farming works for me, but that is also a tough game, but all these troubles motivate me to keep trying it.

Since there was no enough plants, all area was not transplanted and hence you can see weeds on the left side. But other wise, rice plants are healthy and coming OK. 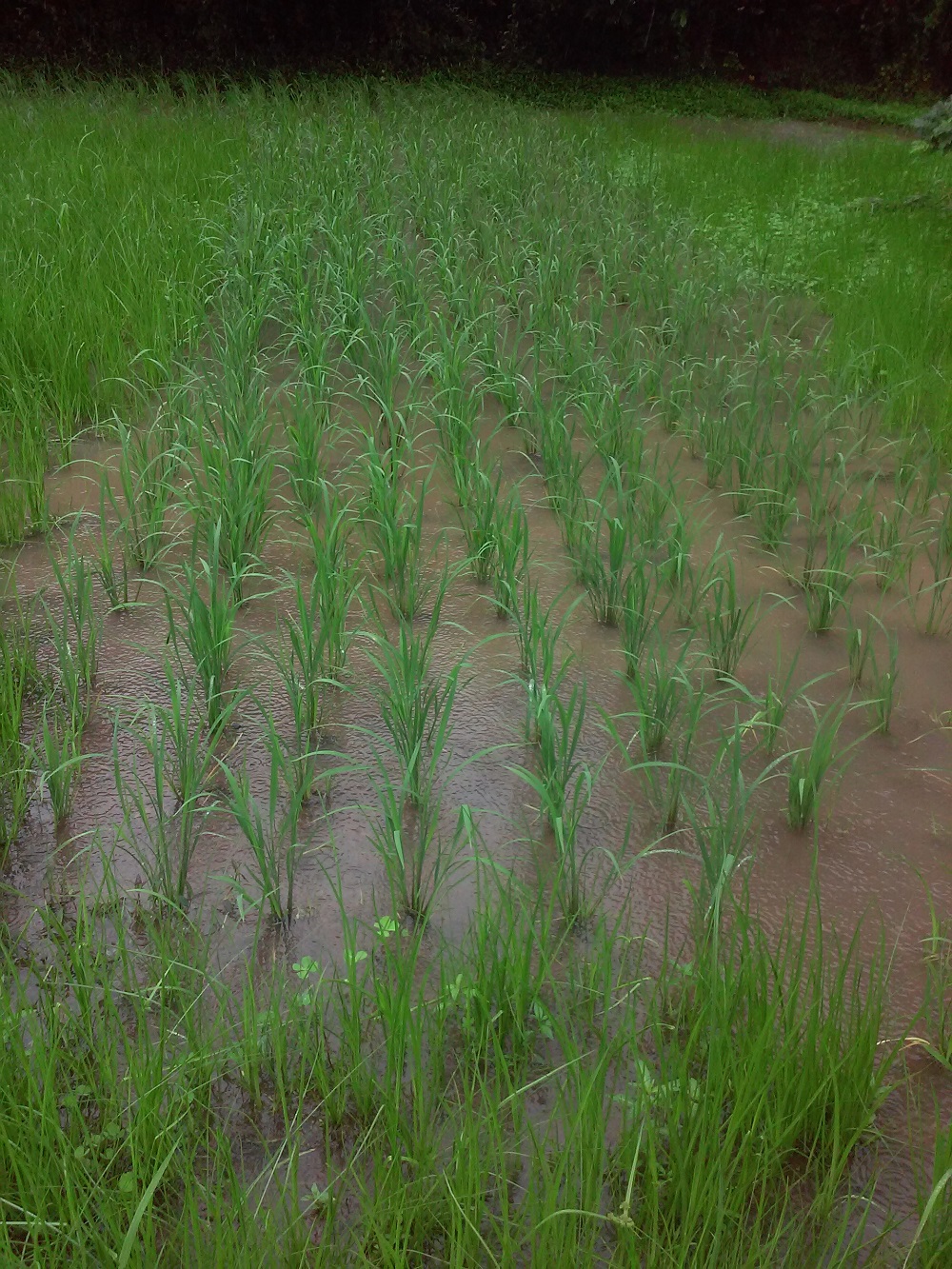 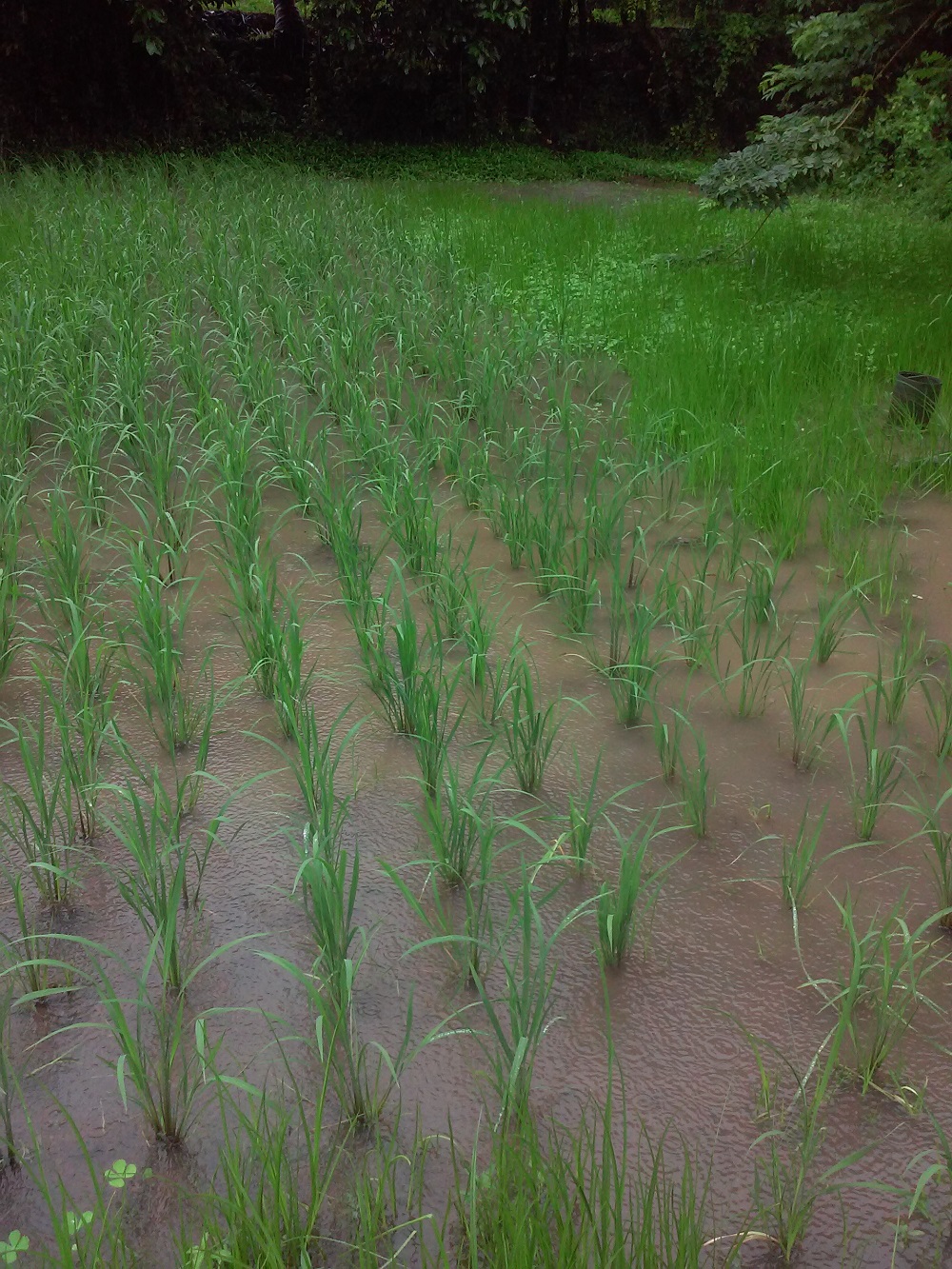 Establishing well..even though one/two seedlings were used, they are growing with multiple tillers...it is an amazing plant...growing paddy is a great experience... 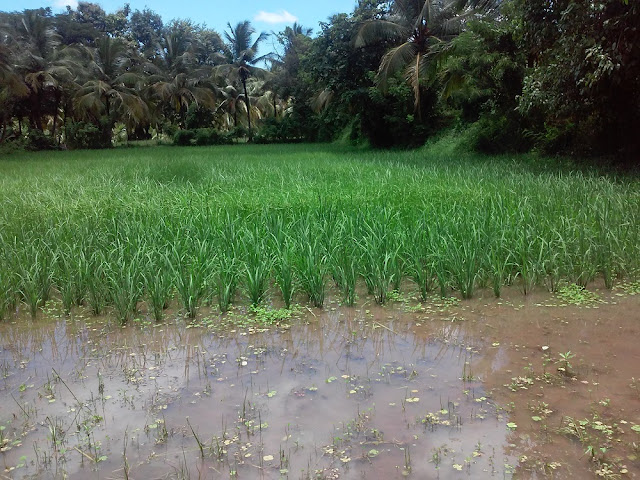 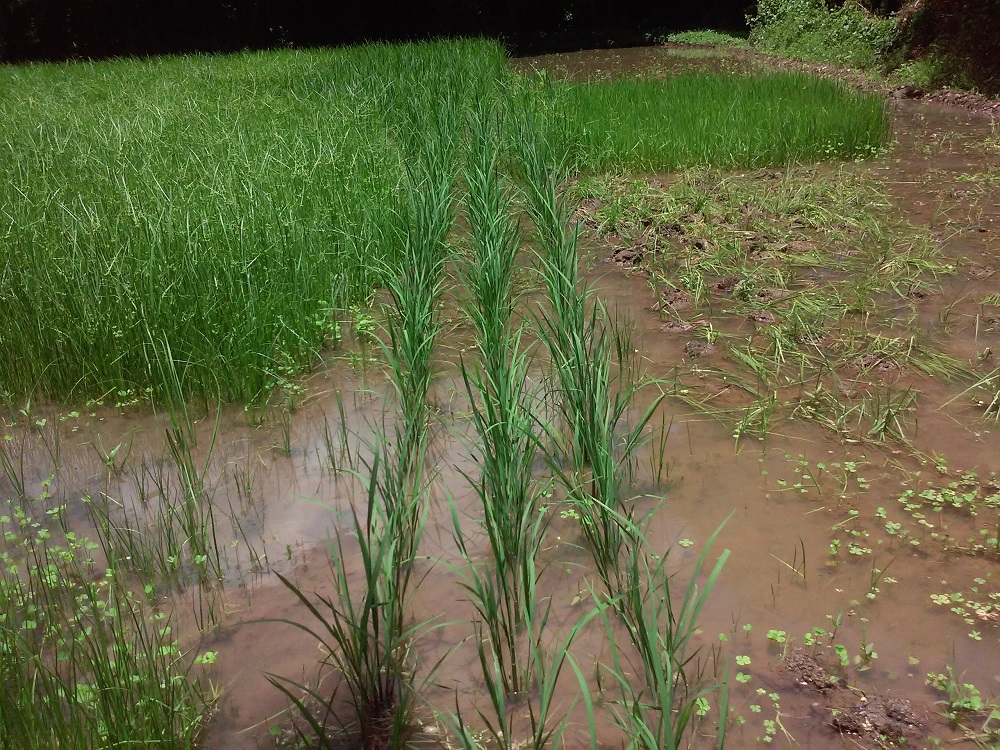 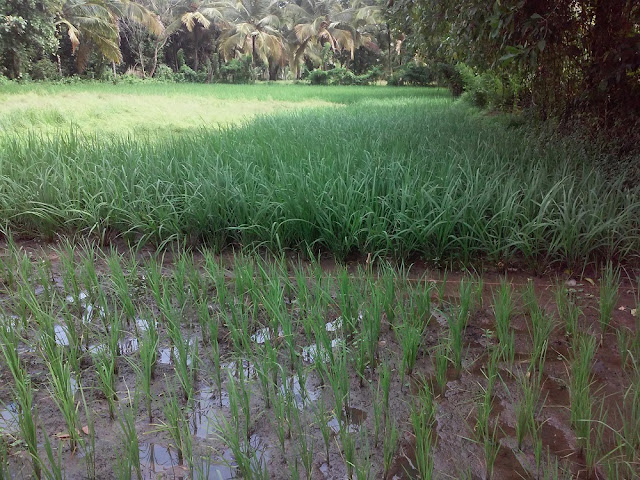 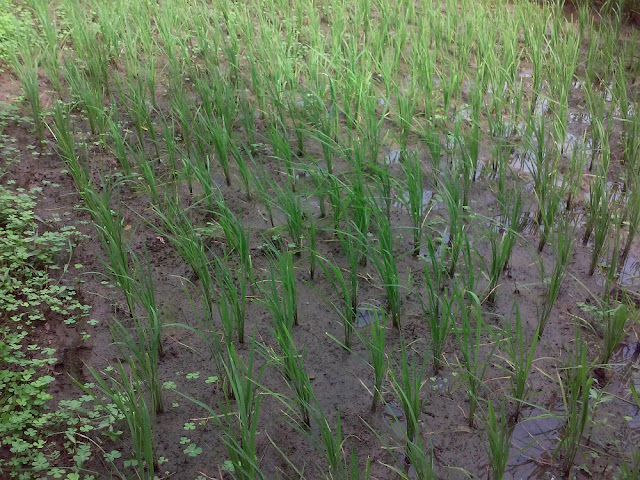 Started flowering...checked with Somettan of Kaliyar, Movaatupuzha from whom I had bought the seeds, according to him if transplanted, harvest will be delayed... 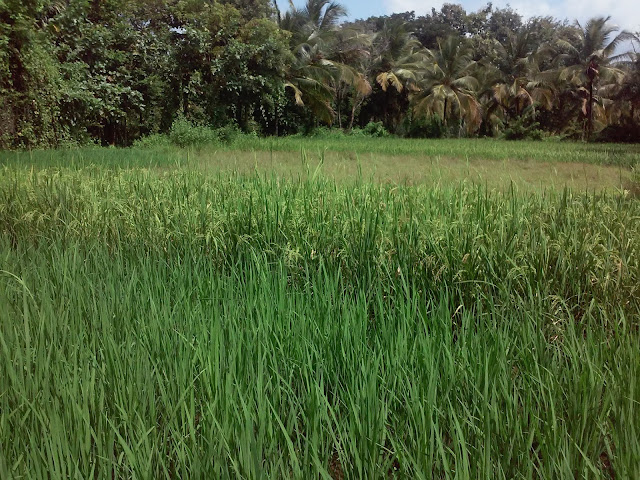 Plants are turning yellow...may be ready for harvest in a week or 10 days...now 3 months over...nearby fields harvest is over and they are getting ready for next crop. 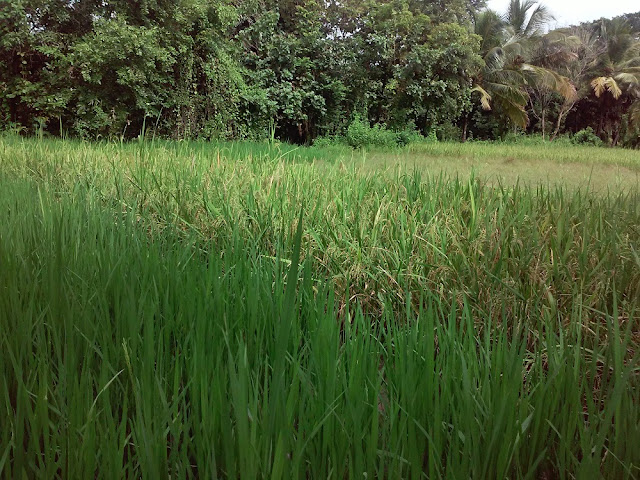 14-Oct-2015
Finally harvesting was done..it took 100 days to mature, 10 days more since it was transplanted..5 ladies were employed to harvest it. I was not present on that day since I had to attend another function, so managed it remotely. Got around 120Kgs of paddy, it is very very less compared to normal standards.. 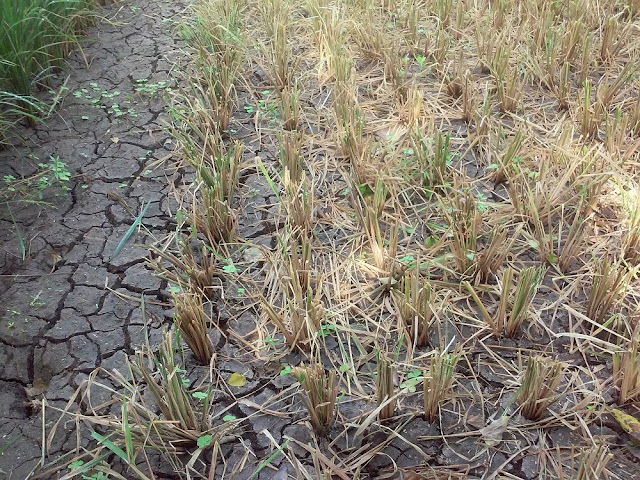 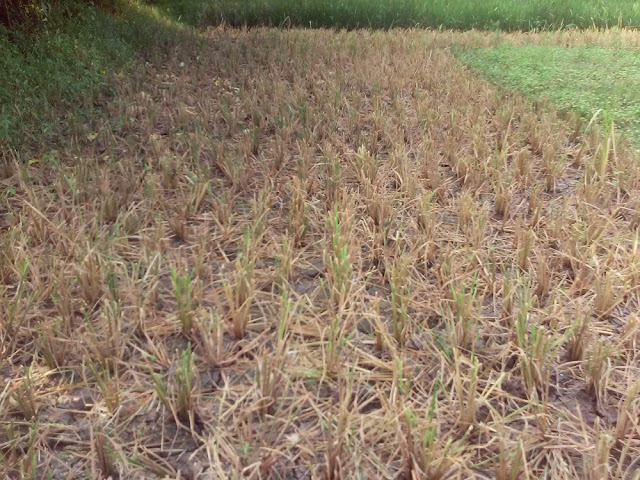 Ground is clean..no grass perfect to start some other cultivation without tilling?? 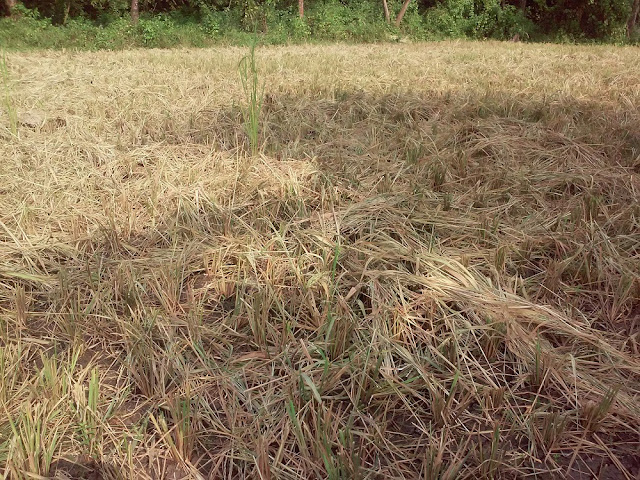 Straw was mulched back...but it does not fit all area...only some portions...