Sowing pre-germinated rice seeds a usual practice followed by farmers. In no-till, using seed ball I don't get uniform rate, not sure the exact reason, may be I have to put simply more seed balls. Fukuoka san used to establish the germination and again put seeds, so this looks to be a practice to follow.

Anyway wanted to try sowing pre-germinated seeds this time.Put seeds in water for 24-hours and kept then in jute sack for 12 hours and seeds starts germinating. This was put in the field after cutting grass. The field has tall grasses, cut it using scythe and my helper did it with sickle and cutting of the area was finished in 3 hours time for 0.05 acre. Later I cut this area using brush cutter with plastic string and took another 3.5 hours to complete it. I am finding that Scythe-Brush cutter combination works better, to clear small grasses brush cutter is good. Next day, the field was flooded and then seeds were sown. Wanted to mulch back, but there was some mulch left in the ground, thought that should be enough. 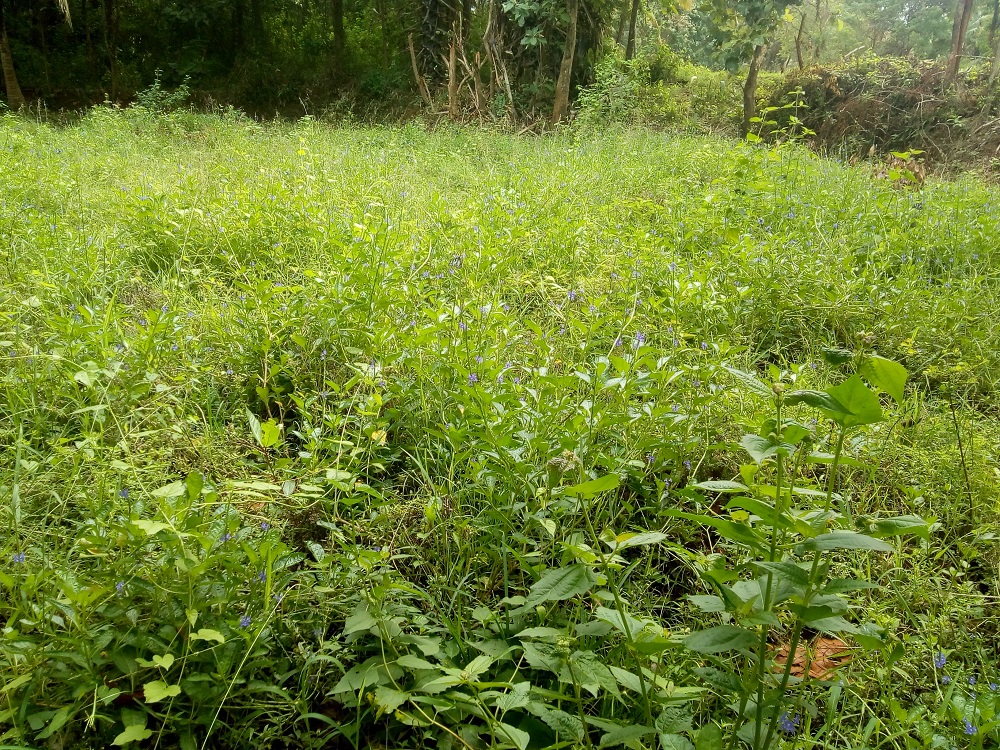 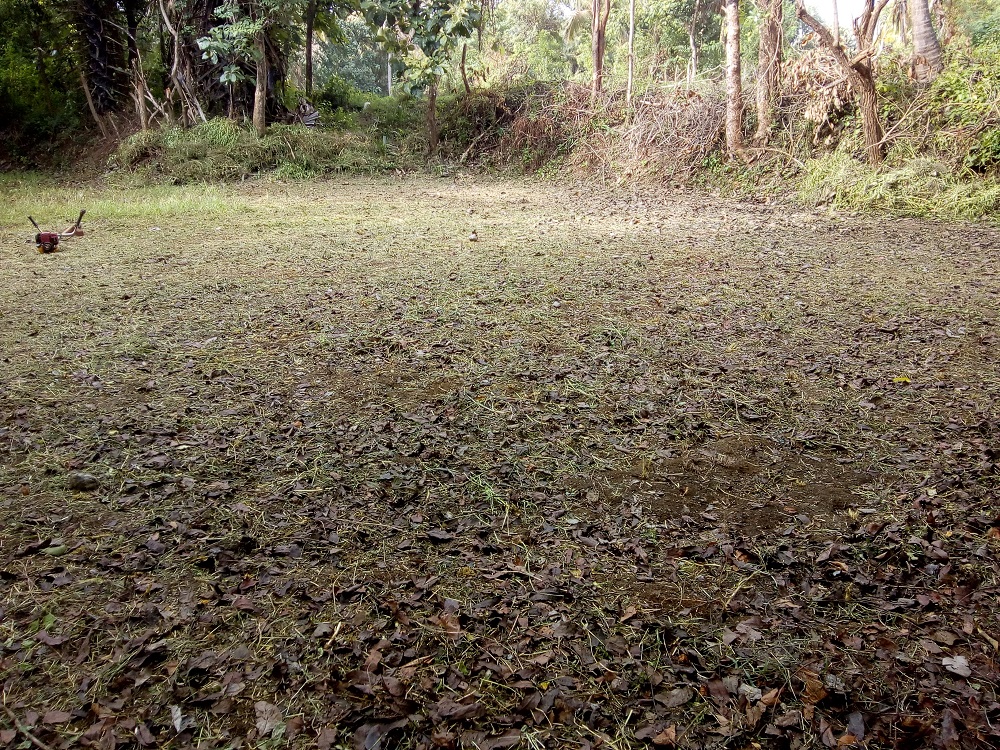 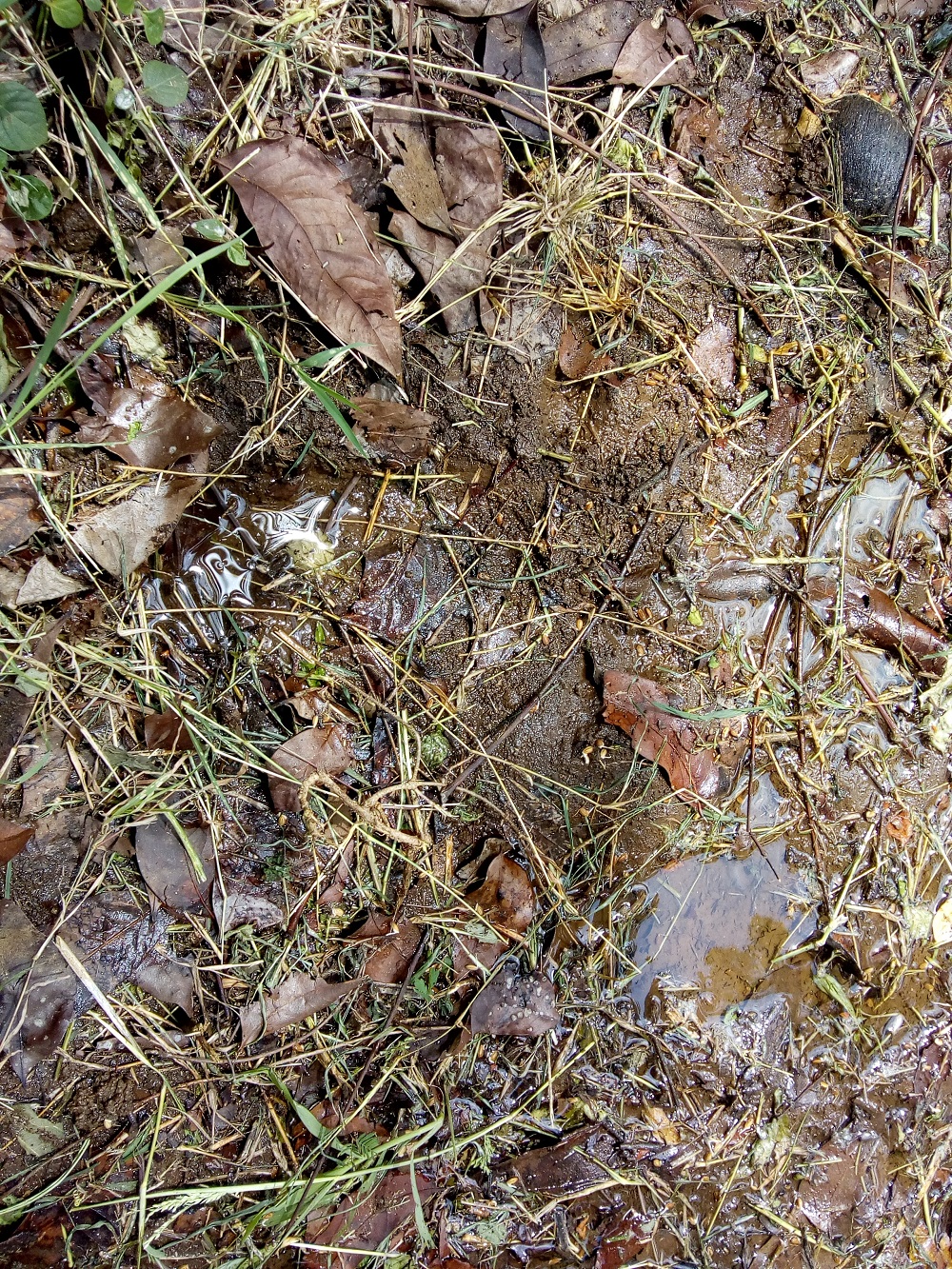 After sowing the seed, I didn't mulch with the remaining grass since the seeds were having its roots out and stepping on that may destroy it. So one more improvement is to just have it germinating so that after sowing, we can still walk on the field to mulch it some more.

30-June-2019
Could see peacock and chickens picking up seeds. Chickens were real nuisance, they were coming again and again, so not sure what will happen to this. May be if I had mulched it, completely, then some seeds would have saved, I didn't do fearing that, stepping on seeds, would kill it. 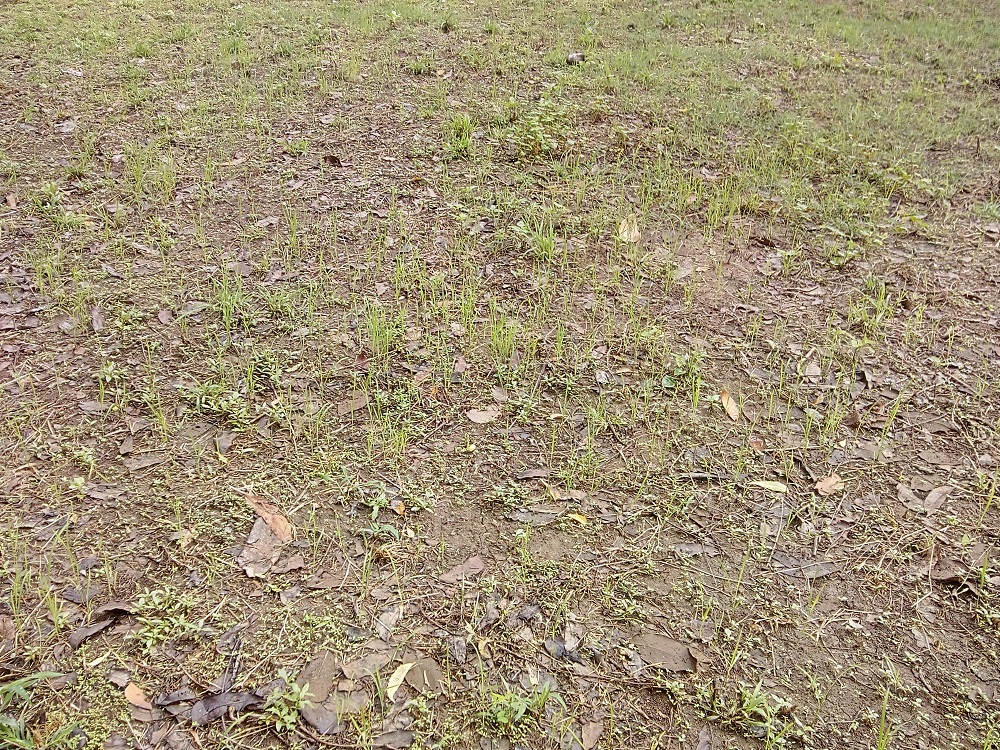 Since seeds were pre-germinated, they are ahead of grass, but grass some time overtakes them after wards. May be more seeds would have crowded out weeds, that is some thing to be tried for next season.

No weeding was done, still rice is just managing.. 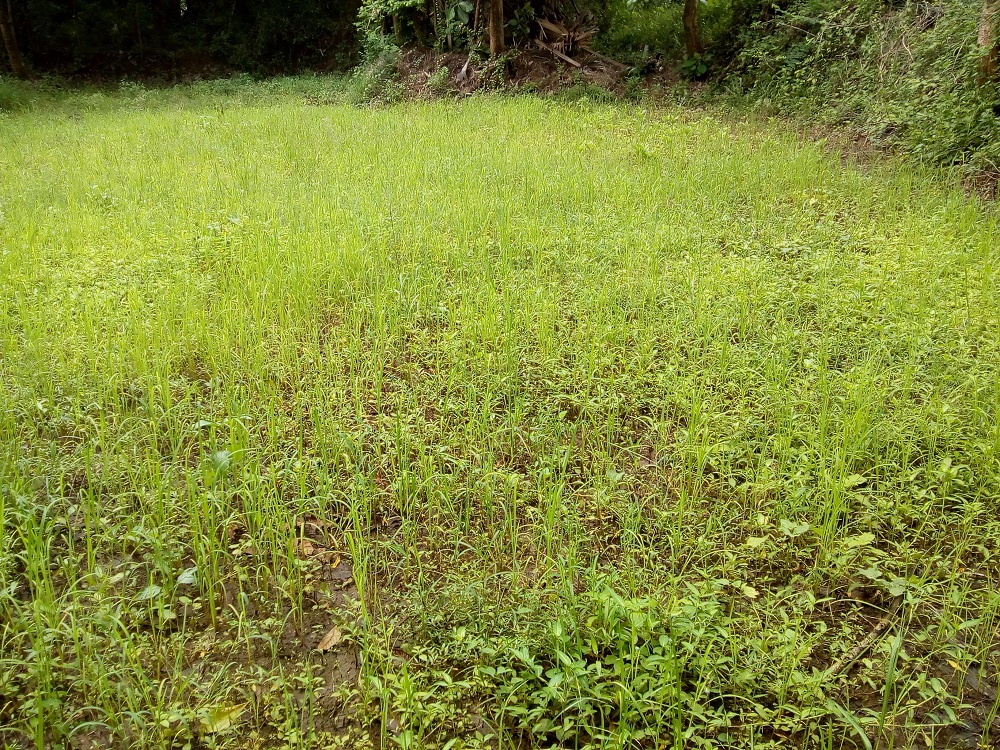 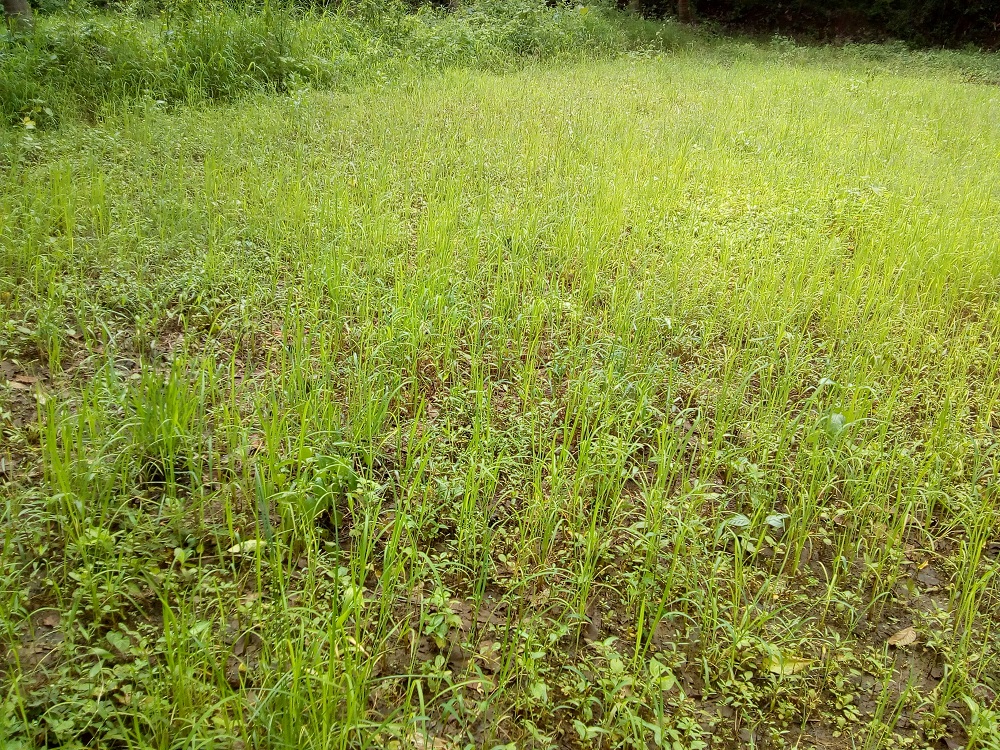 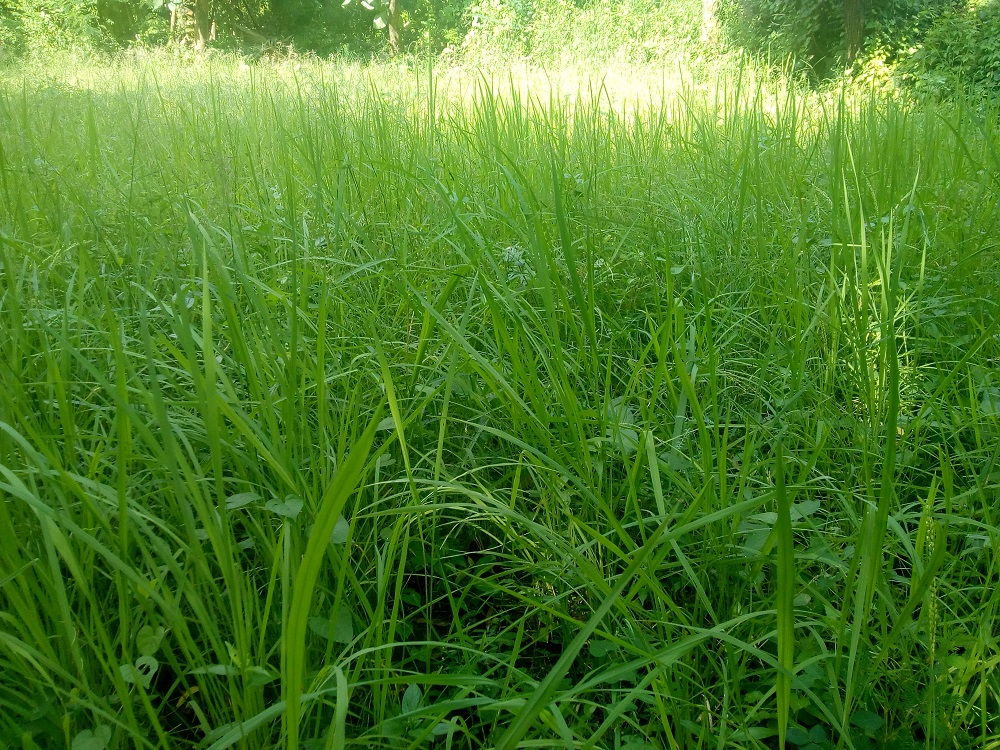 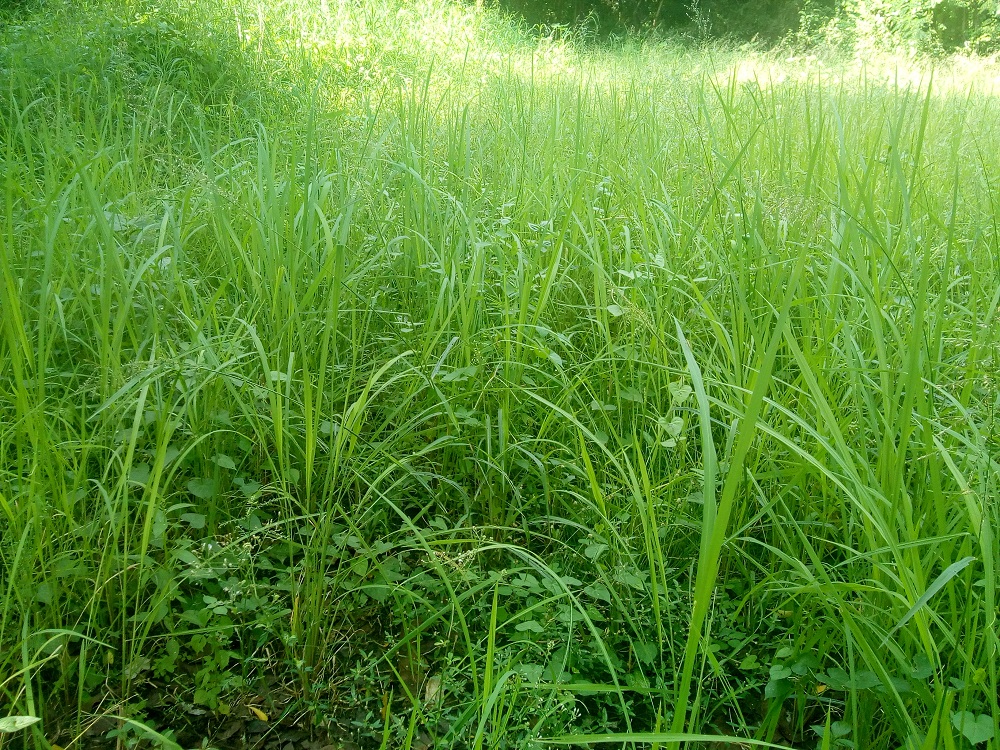 Grass and rice plants growing together..In some area, there is good establishment of rice plants..May be putting more seeds and mulching would help. But feel sowing germinated rice plant is the way to go in our climate till good humus is developed.
Posted by Nandakumar at 10:57 AM 1 comment:

Read in the veteran organic farmer Chandran Mash's book that turmeric grows well under mango tree and ginger under jack fruit tree. Also a natural farmer Pappachan from Kannur advised me to try planting ginger using just mulch. Put seeds directly in soil, after cutting the pureria cover crop and then put a handful of dried cowdung above seed and then mulch lightly. When the mulch decomposes again mulch do this couple of times. Trying this using turmeric under mango tree. 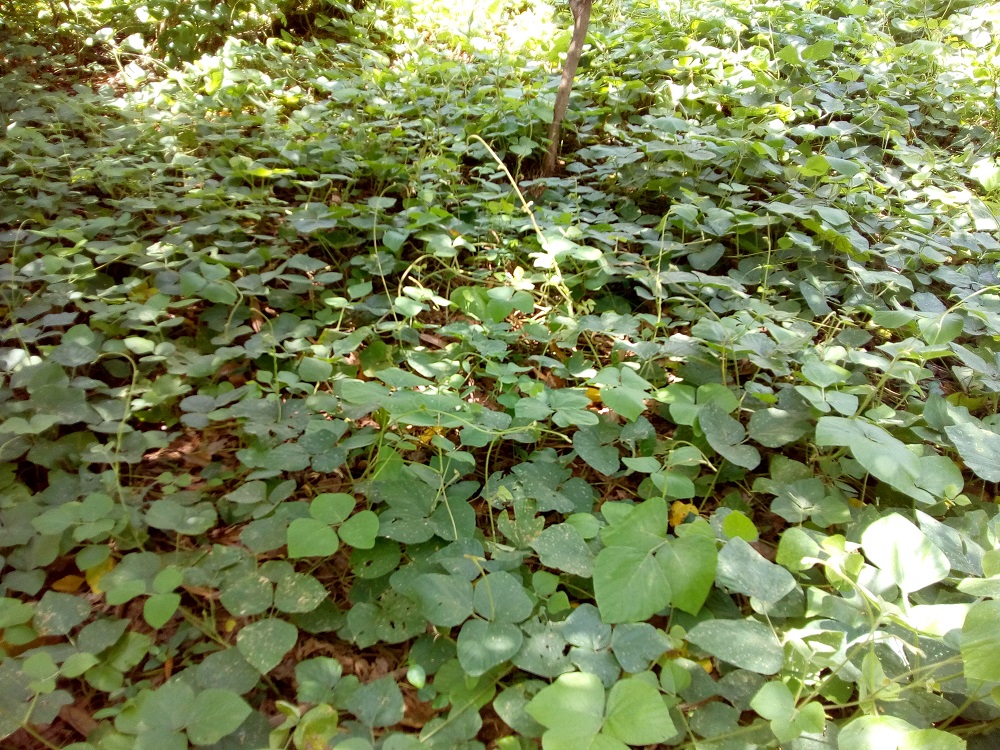 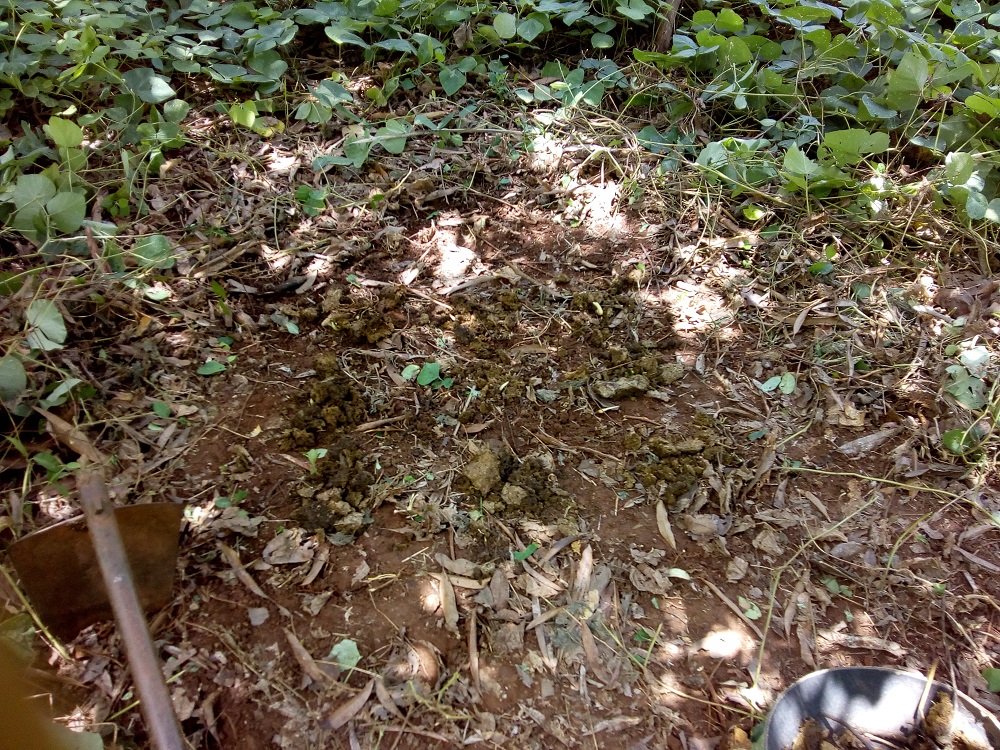 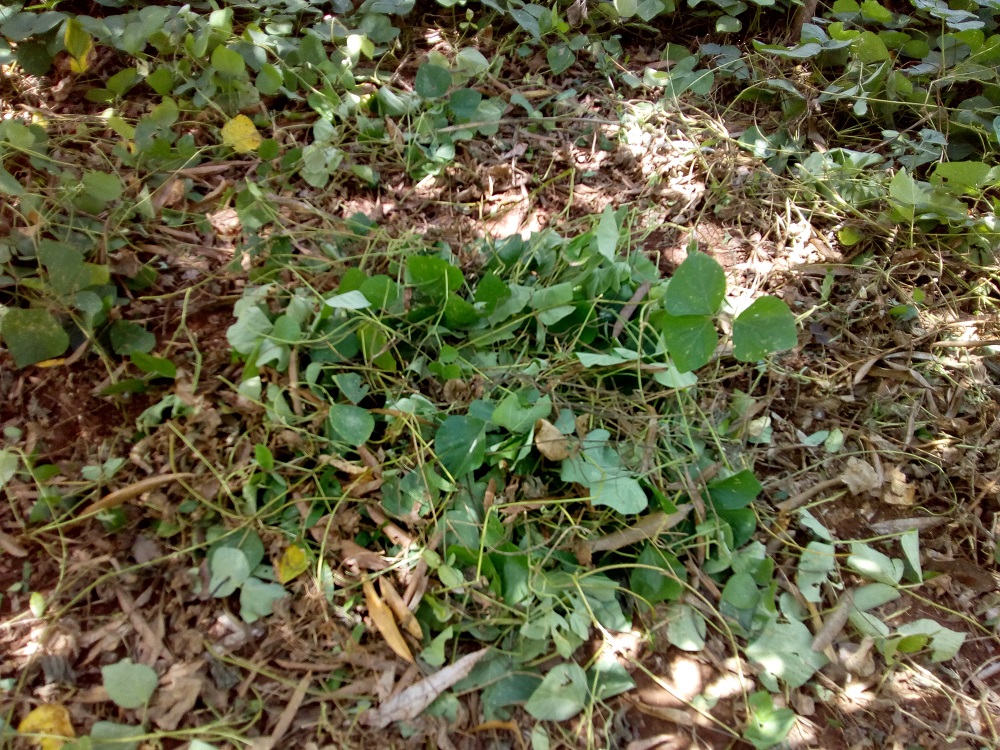 Since this is near walking path, cut and clear this area once in a while.. 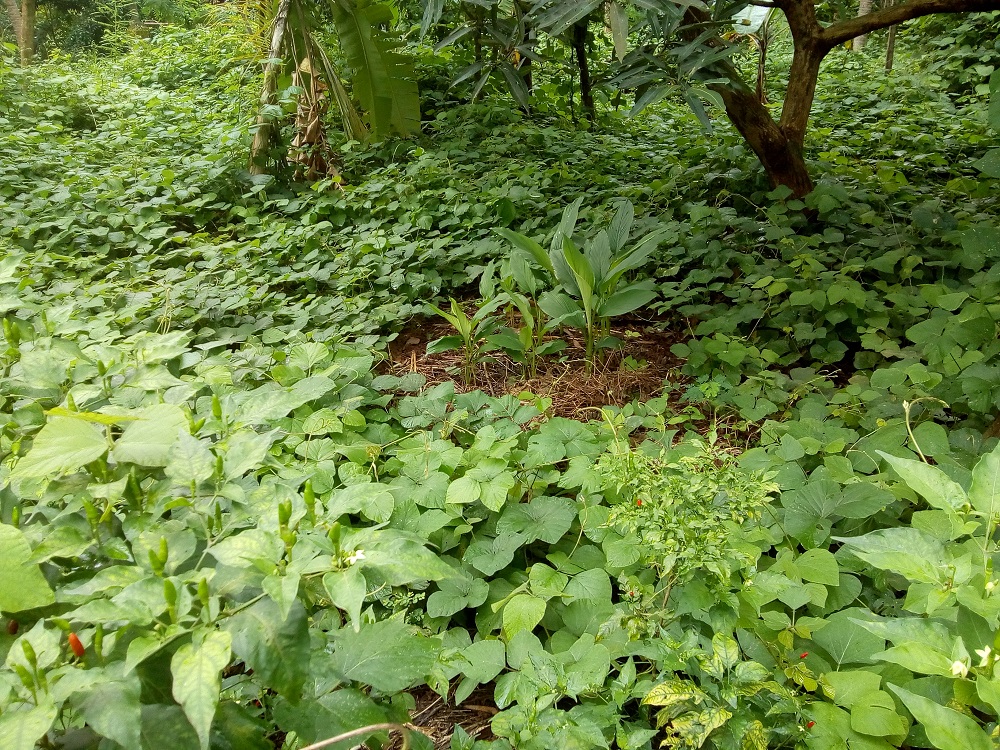 Similar to Inga Alley Cropping, since Pongamia tree is the best replacement for Inga tree, this trial is going on.Got around 3Kgs of Pongamia seeds from a friend called Suresh and it was put in a separate area and it was watered couple of times, it germinates well and growth is very fast. 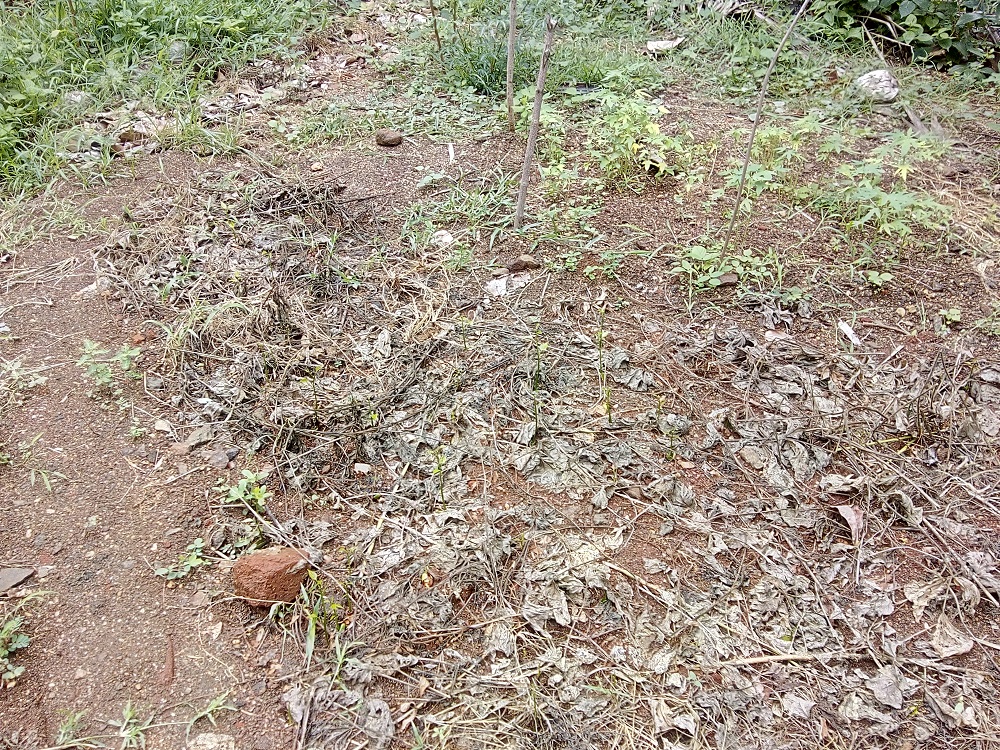 Pongamia trees are growing well in the nursery, has to be planted in the actual place in a month. 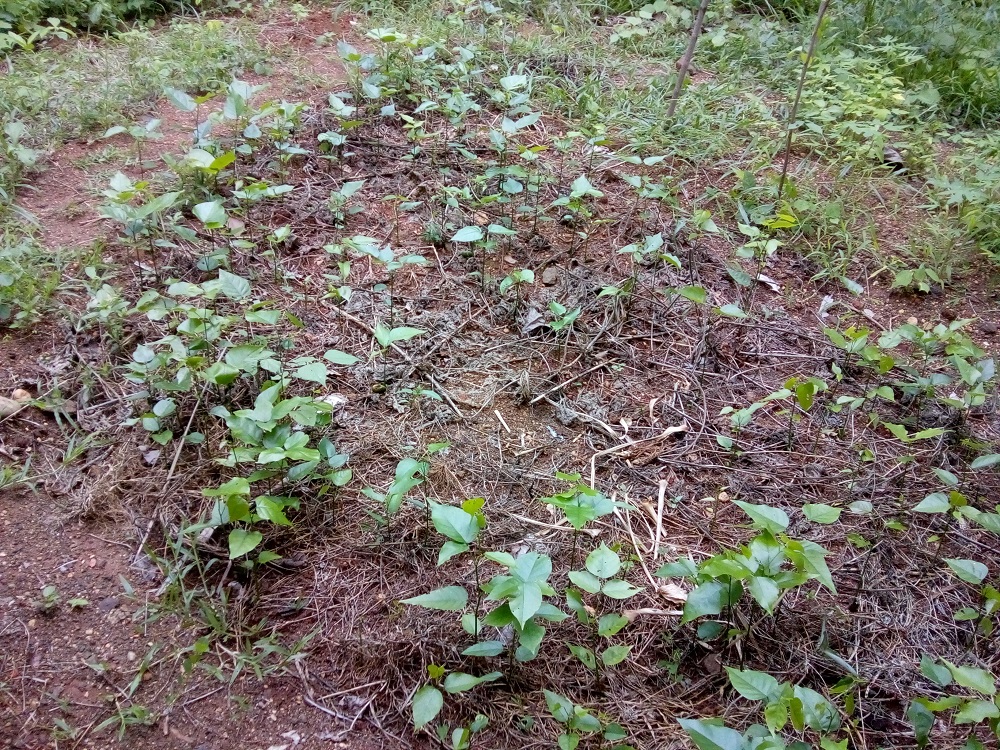 Posted by Nandakumar at 12:18 AM No comments:

Also got around 18 bags of cowdung and spread in the pit before planting turmeric fingers.

Employed 4 women laborers and completed turmeric planting. Applied another 9 bags of dried cowdung. Efficiency of workers is less when there are more people, lots of time spent on talking, have to try with 2 and also directly working along with them. 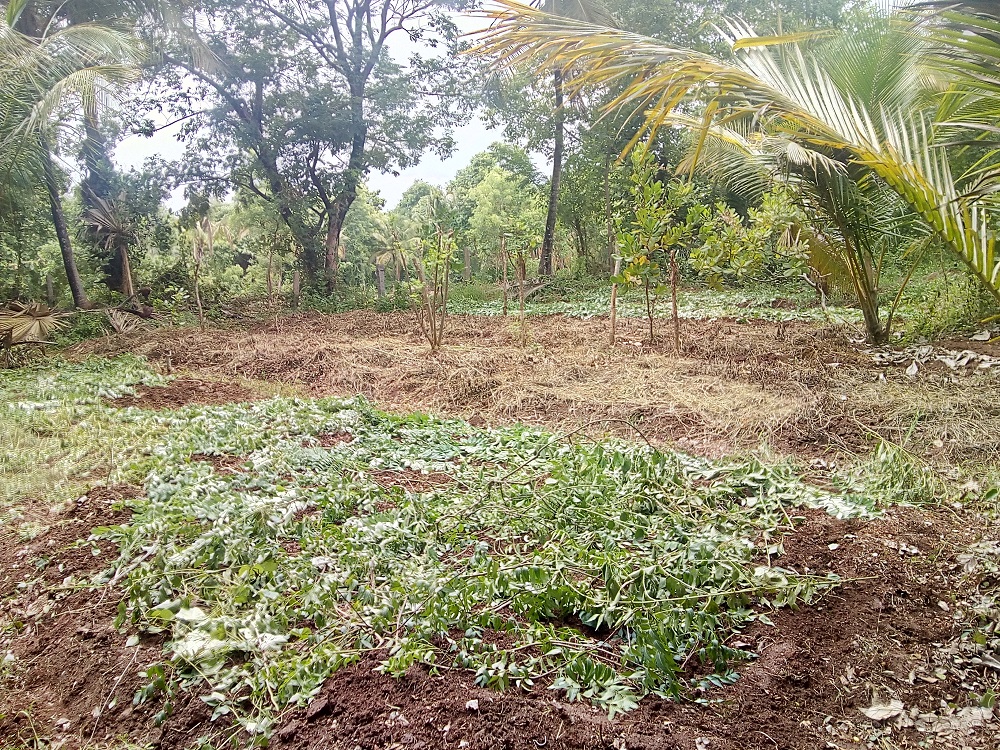 Planning to apply cowdung slurry and also one or two weeding and mulching.

Did one weeding and mulching with glyrecedia leaves, so far it looks good. 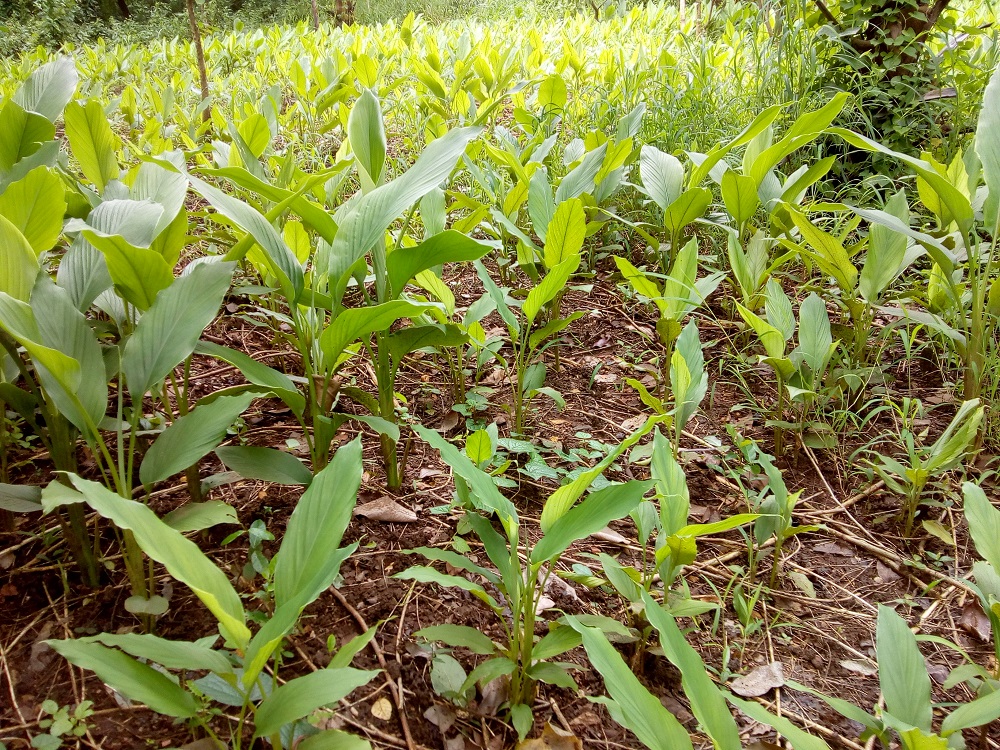 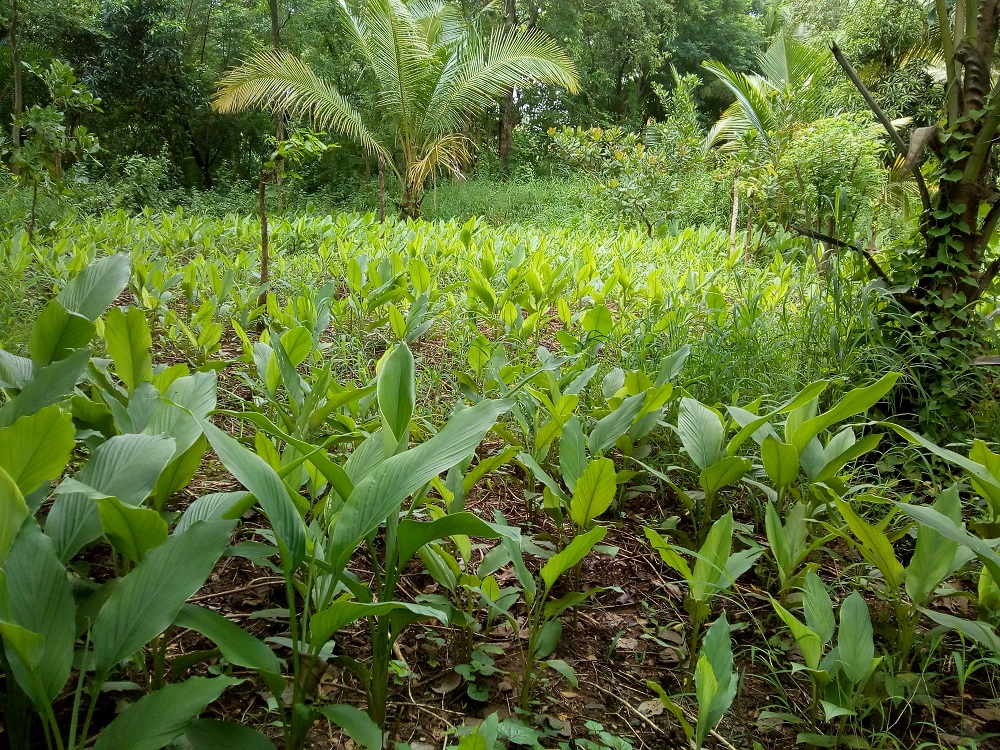 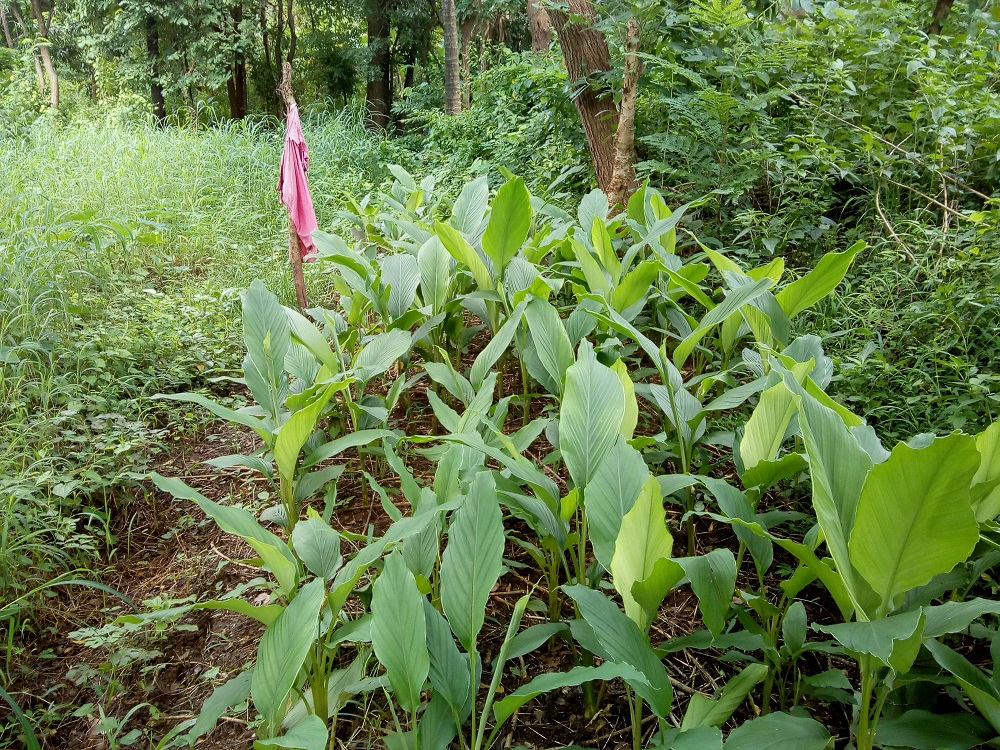 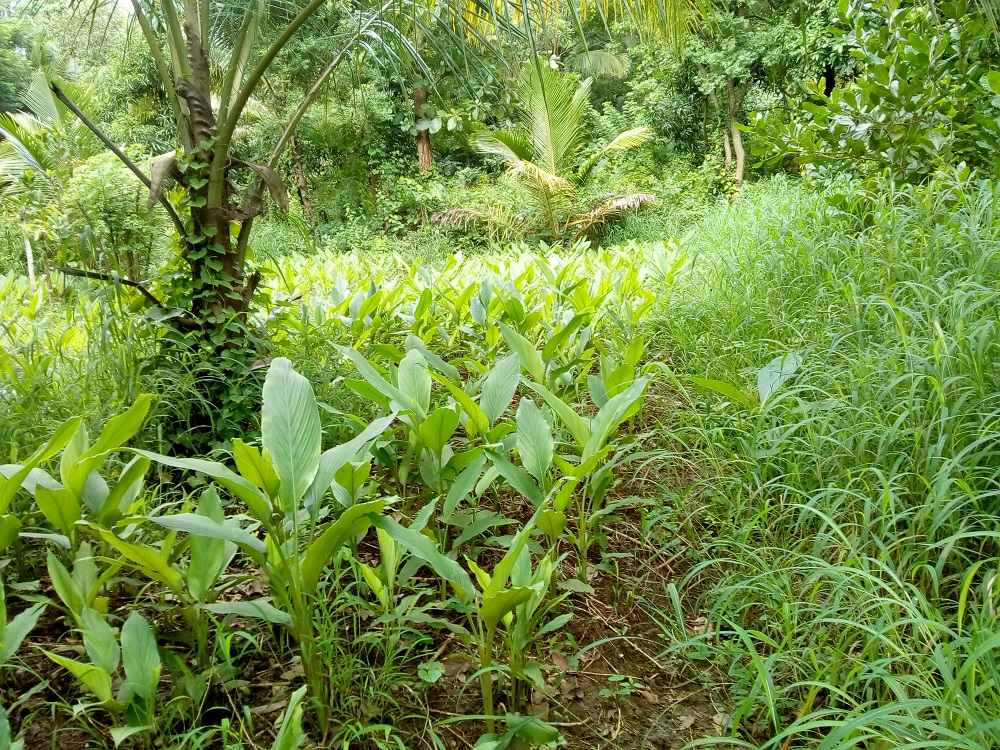 Cut some non-used area of the farm and sown seedballs of finger millet and Sorghum. In one area, the grass is not strong, since there is shade from trees and also mulch from the tree leaves. These seedballs are small size,bigger size makes more time, so went for small size.


Finger millet was not germinated at all and Sorghum only a few seeds. Both were in seed balls and rain was less after putting, also seed balls were small, so probably soil would have washed away soon before germination and seeds got eaten by ants. So at this point it looks to me that putting germinated seeds in wet ground is much better and predictable. If rain fed, wait for a good rain and before the groud dries up, have to put germinated seeds and mulch lightly.
Posted by Nandakumar at 9:32 AM No comments: